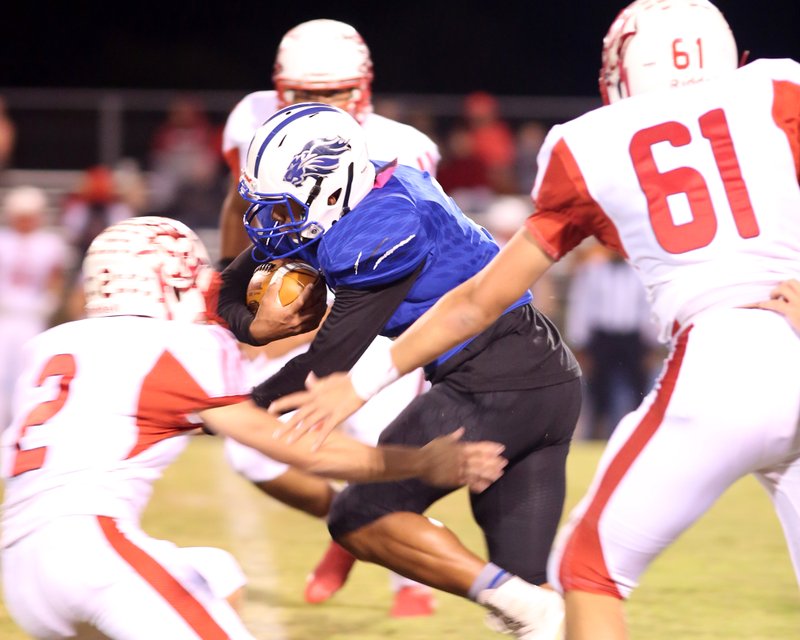 The Sentinel-Record/Corbet Deary DRIVING FORCE: Jessieville's Matthew Huff works his way down the field as a pair of Atkins defenders close in on him in an Oct. 11 game at Don Phillips Field. The Lions travel to Mayflower tonight.

With nothing riding on tonight's matchup between Jessieville and Mayflower, some coaches might opt to essentially take the week off and recover in preparation for the Class 3A state football playoffs.

Jessieville head coach T.J. Burk is not one of those coaches.

"We could, but, you know, we don't attack it that way," he said. "We don't want our kids to ever go into a game thinking we're not going in with full intentions on winning the game. So, you know, we've had a normal practice week and attacking it like we would every other weekend. We're looking forward to playing tomorrow night."

Last week, the Lions turned a 15-0 first quarter lead into a 43-0 lead going into the fourth.

"All week we talked about stopping the run, and we focused a lot of defensive effort into sealing the edges and not letting them get around it," Burk said. "And, you know, we plugged the holes really well, and we were able to make tackles with one guy last week. Then we had several more rallying to the ball, and we were able to stop them.

"We were able to stop their offense and give our offense the ball back and give us chances to score. And that's the name of the game. If you can score more than the other guy and keep them out of the end zone, you win. So a lot of credit goes to our defense and how they played."

Stopping the run will be key for a win against the Mayflower Eagles (2-7, 1-5), who run an old-school dead-t or double-wing offense.

"They've got several running backs in the backfield," Burk explained. "They're going to give to them quick and let them hit it downhill and try to get their athletes in space and let them make plays."

"They've got some kids in the backfield that can run," he explained. "And they're big up front, so they they move people. If you don't do a good job of tackling them, they can make you pay in a heartbeat."

Mayflower has also made some offensive changes the last few weeks, trying to earn its way into the postseason.

"They've kind of changed their offense a little bit in the last few weeks," Burk said. "They put some of their better athletes in the backfield, and they try to get the ball to them quick and let them make plays. So you know, we've got to be ready defensively to to make tackles."

The Lions are as healthy as they have been since losing junior wide receiver/safety Charlie Davis earlier in the season to a season-ending injury.

"We're the same as we were last week," Burk said. "We didn't really get anybody banged up, so we're going into it with the same guys that we had last Friday night.

"We had a couple other guys banged up here and there, but we've got them all back now. So we're good to go, minus Charlie."

Kickoff at Patrick Stadium is set for 7 p.m.