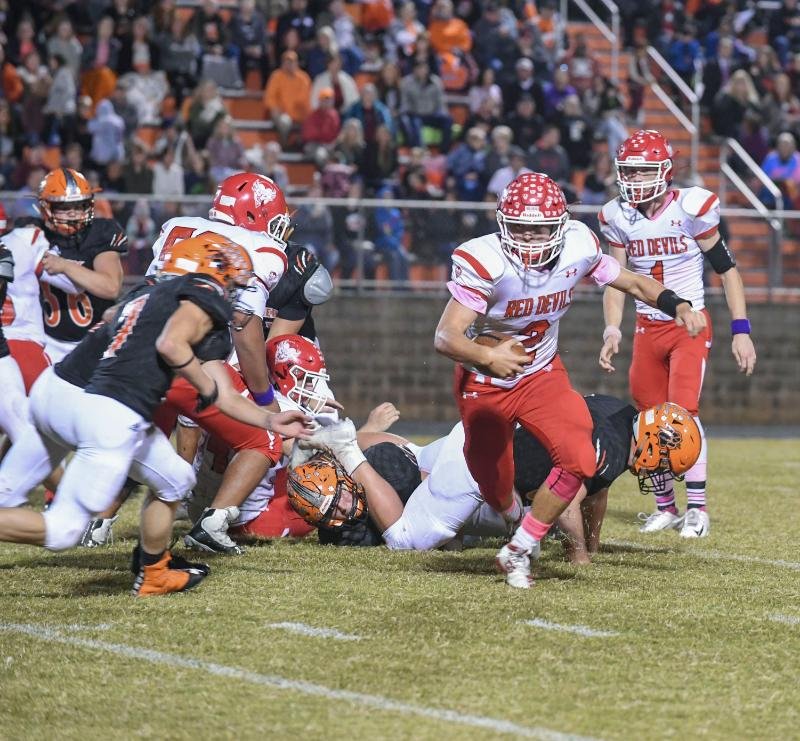 With the No. 2 seed out of the 2A-5 secured, Mountain Pine aims to keep focused going into Friday's regular-season finale against Quitman.

The Red Devils (5-4, 5-1) picked up their only conference loss against Magnet Cove three weeks ago and secured their seeding with last week's 36-20 win over Poyen, but head coach Sam Counce does not want his team to relax against the Bulldogs (4-5, 1-5).

"We just want to maintain our intensity," Counce noted of the team's main focus. "We want to go out and be good on offense, defense and [in our] kicking game. Where we're sitting right now is where we're going to be when it's all over with after the game, and you've got to find a way to get yourself ready to play. That's what I've tried to stress to them this week.

"It's a big game because it's the next game, and good football teams get ready, prepare themselves every week the same way. The fact is that we need to have a good game to go into the playoffs."

After going 4-0 to start the regular season, the Bulldogs ran into a brick wall with a 34-7 loss against Cutter Morning Star in Week 5, and with just one conference victory over Bigelow in Week 4, Quitman's season ends when the final whistle blows Friday night.

"Quitman's had a tough year; the record shows," said Counce. "We ought to be OK, but I also told them that if they go out and some calls go the wrong way, [and] we fumble it a few times, we'll be in a dogfight. I've just tried to maintain intensity and make them understand that in order to get into the playoffs with some momentum, we've got to play good this week."

With the Red Devils' roster presenting a full lineup of healthy players, Mountain Pine is ready to fire on all cylinders in every phase.

Mountain Pine has had a few struggles throughout the season, but Counce challenged the team to step up, both offensively and defensively.

"We've got to get better on the offensive line," he noted. "We've had some mistakes in the interior line and some break downs, and we've gone over a lot of that [to] try and correct that. On top of just being a good football team, tackling in open space and things like that [is what we] work on every week. But our emphasis really [has] been on the offensive line, getting better this week in correct steps and maintaining our blocks."

Mountain Pine relies on a dynamic senior crew made up multiple athletes who have stuffed the stat sheets week in and week out.

After completing 39 passes for 383 yards so far this fall, quarterback Collin Smith proved a dual-threat as the field general amped up Mountain Pine's ground game, rushing for 1,860 yards on 211 carries. Jace Chacon has logged 35 touches for 164 yards, Jeremiah Walker has run 87 times for 416 yards and Kason Porter has 15 attempts for 34 yards.

Kayden Anzaldua has reeled in 21 passes for 212 yards going into Friday night's game while junior Josiah Walpole has five catches for 68 yards while logging 79 yards on 11 touches. Kai Moore adds depth with nine carries for 74 yards while adding five catches for 34 yards, and Dylan Munson has two receptions for 36 yards so far this season.

The hard work does not end on offense. Defensively, Walpole has paced the Red Devils with 48 solo tackles, Chance Godwin with 35, Chacon with 28, Smith with 27, Jason Bennett with 18, Cobra Barnett with 17, Anzaldua with 15 and Walker with 11 solo stops.

"We expect Collin Smith to play good every week," Counce said. "As he goes, we go. Another one that has really set the tone for us in some games is Josiah Walpole. He has really come out and played well for us. Kai Moore has been a good addition for us; he was out for a few games and here late, he's going to be another weapon that we'll have to be able to throw to and get the ball to. The seniors have got to play good because when you get into the playoffs, you don't get a next week if you don't win, so I'm expecting those guys to play good and get us into the playoffs with a lot of momentum.

"This is a special group to me. They were in the ninth grade when I got here. We canceled our senior high season that year, and they were all we had that year as far as playing in junior high. So this group, I started with them, and they started with me. It's going to be tough to see those guys go. ... I feel like they've taught me more than I've taught them as far as being a coach and being around these guys. This group is special to me and they always will be."

Kickoff is set for 7 p.m. at Quitman's Bulldog Stadium.