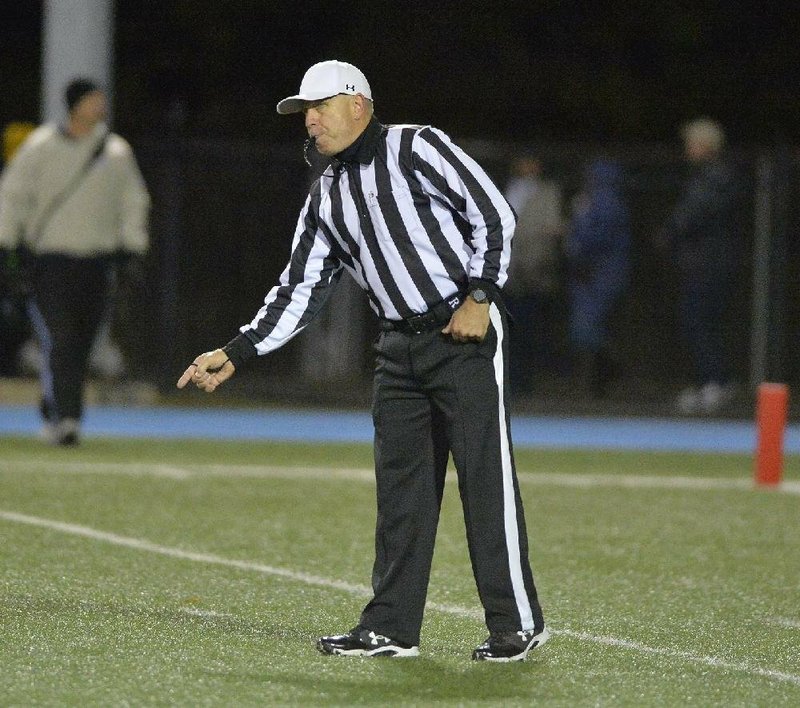 The love of football got Briant Derrick into officiating.

But the veteran Arkansas high school football official said he understands why there aren't as many officiating in 2019 as there have been in past years.

"They come into it with good intentions," said Derrick, who has officiated in the state for 15 years, with the past nine as a head official. "They drop off within the first couple of years. The behavior of fans and some of the others, it just doesn't warrant staying an active official.

"It's made recruiting quality young men and women difficult. We still go out each year and recruit. We encourage them to come out and be a part of it. But sometimes, they don't really realize what they were getting into."

Don Brodell, an associate executive director with the Arkansas Activities Association who serves as a liaison for the Arkansas Officials Association, said there are 2,000 officials with the AOA, with football between 875 and 900.

"We're ahead of where we were last year, but we're below what we were three years ago," Brodell said.

An op-ed letter from the AAA released earlier this year cited a survey by the National Association of Sports Officials that said more than 75 percent of all high school officials say "adult behavior" is the primary reason why they quit and that 80 percent of all young officials quit after two years of officiating.

Jimmy Woods, who has officiated games in Arkansas for 32 years, isn't confident that the officiating numbers will improve in the state, citing incidents earlier this season involving Glen Rose and Fouke players at a game in Fouke and an incident involving West Memphissuperintendent Jon Collins allegedly spitting on an official during a game at Wynne. Collins then resigned from the AAA board of directors in October.

"We're all getting old, man," Woods said. "The numbers are horrible. We're not getting new officials. They don't stay with it.

"Until they can change some things, make it more lucrative, make it safe all the way around, it's going to be a numbers game."

Arkansas high school football officials are paid $65 per varsity game and $50 per junior high and junior varsity game. It's $70 for playoff games and $80 for state finals per official.

"The benefit is that it's a nice part-time job," Brodell said. "You can work a game and make a couple of hours of money."

However, the abuse that some officials receive have helped drive some of them out of officiating, or close to it.

Kevin Bohannon, who works as a line judge with his father Tony Bohannon, a former head coach at North Pulaski who is now a head official, was asked what he would tell fans, coaches and players on how they could treat officials better. He compared it to a typical workplace situation.

"If I came in Monday morning, you were at your office and I came in and yelled at you without knowing what you were doing, how would you feel?" said Bohannon, who has been an official for seven years. "We want a good product and have you say when you go to a game that it's an enjoyable experience."

Dealing with verbal abuse, Derrick said, has always been part of being an official. But he adds that a new official must be ready for fans, coaches and players' emotions in a game, before, during or after.

"You have to anticipate that people are going to disagree with you," Derrick said. "If your feelings are easily hurt and you don't like anyone disagreeing with you, then this isn't for you.

"But if you're thick-skinned and you can take verbal abuse, it might be the right thing for you.

Bohannon said verbal abuse has gotten personal over the years.

"They watch football on Saturday and Sunday and think that applies to Monday, Tuesday, Thursday and Friday," Bohannon said. "It goes a little too far. Being accused of cheating is something we take very seriously. They just don't want to say it's a bad call. They want to say it's cheating."

Brodell has encouraged officials to not discuss their games on social media.

"It hits Twitter, it hits Facebook," Brodell said. "It's difficult. The officials are tempted to respond. If fans want to respond, let them do so. But we prefer our people not to."

Derrick's goal when he officiates games is not be part of the outcome or story.

"All the years I've been around, I've never been around an official who would try to make a bad call or try to cheat a team out a game," Derrick said. "We want the teams to decide who wins the games. We really hope the fans don't remember much about us. We don't have to have an image that we try to call a game unfairly."