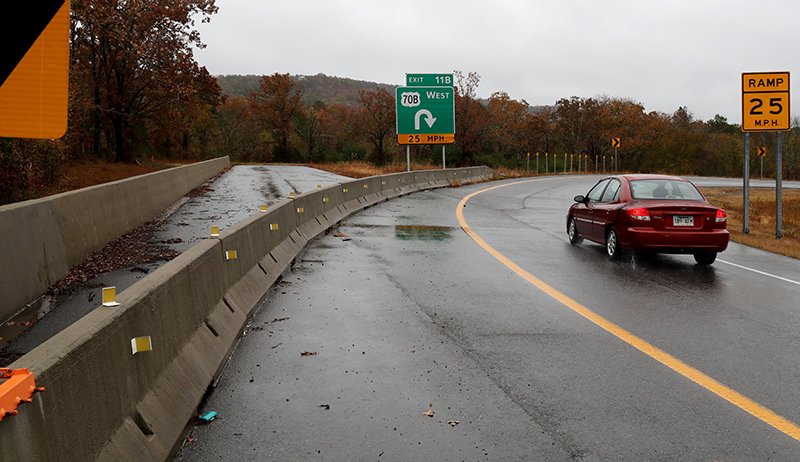 A vehicle travels through the Highway 70 east interchange of the King Expressway on Nov. 7. - Photo by Richard Rasmussen of The Sentinel-Record

Garland County officials said Thursday they expect to send the $25 million balance of the county's cost share for the King Expressway extension to the state next week.

The Arkansas Department of Transportation opened bids Wednesday for the more than 5-mile, two-lane extension of the expressway from the Highway 70 east interchange to the Highway 5 and 7 junction. McGeorge Contracting's $75.15 million bid was the lowest of the three submitted. The Pine Bluff company completed the $78.5 million widening of Highway 70 east from Hot Springs to Interstate 30 last year.

"We're excited they were the low bidder," County Judge Darryl Mahoney said Thursday. "That's an Arkansas company that did a great job on Highway 70. They'll start mobilizing very quickly. They should start clearing and grubbing by the end of the year. They're a very aggressive company."

McGeorge's bid said it could complete the project in 890 days. ArDOT said Thursday that 50 of the 62 tracts the extension will traverse remain outstanding. According to property records, eight deeds transferring close to 7 acres to the state have been recorded. ArDOT said in September that the project will displace 14 households and eight businesses.

The county has already paid the state $5 million for project development from the $54.6 million bond issue county voters authorized in a June 2016 special election. Businesses began collecting the 0.625% countywide sales tax securing the debt in July 2017. Mahoney said he expected the state to request the balance of the $30 million the county agreed to contribute to the project, which had an initial estimate of $60 million to $65 million, next week.

County Treasurer Tim Stockdale said the $25 million has been drawing 2.51% interest in a six month certified deposit with Southern Bancorp. It will have generated close to $325,000 for the road bond fund when the CD matures next week, he said.

A Simmons Bank portfolio statement Stockdale provided showed $44.29 million in bond proceeds remain, of which $9.29 million is uncommitted. He said a $10 million Relyance Bank CD drawing 2.4% interest matures later this month. Stockdale said that interest will add to the $1.6 million the bond proceeds have realized through short term investments in CDs and money market funds.

The $9.29 million in uncommitted funds are in a Federated Treasury Obligations Money Market Fund, according to the portfolio statement.

The bond fund holds all of the bond proceeds, including population-based shares the county provided incorporated areas through a series of interlocal agreements. Hot Springs received $7.3 million for city road projects, and the county got $12.4 million for improvements to its road system. Information provided by the county finance department showed balances of $8 million and $6.1 million for the county and city, respectively.

The county has not tapped its balance since awarding $2.4 million in bridge projects last year. Mahoney said the bridge replacement and bridge widening on Danville Road were completed earlier this year. The new bridge on DeArmon Trail is open, but Mahoney said the approaches haven't been paved yet.

He said culvert extensions and the widening of two bridges on Amity Road are nearing completion. The replacement of a railroad car bridge spanning the White Oak Creek mouth into Lake Hamilton on Farr Shores is about halfway finished, he said.

"I know next spring they're going to let bids for Albert Pike near the Piney Junction," he said. "I'd like to have (the Thornton Ferry) plans ready to go at the same time. Maybe we could get a bidder to do (Thornton Ferry) while he's there and save some mobilization fees."

The county's cost share for the expressway extension arose from an exploratory committee of political, business and community leaders that convened in 2015. They discussed extending the 0.625% sales tax that secured the $41.8 million bond issue that financed construction of the county detention center at 3564 Albert Pike Road.

No minutes were taken at the meetings held at West Central Arkansas Planning and Development District and attendees were not required to sign in, but several said there were also discussions about creating an economic development fund with the tax.

Transportation was listed as the county's biggest challenge in a poll of 400 registered county voters the committee commissioned in December 2015. More than two-thirds of respondents supported extending the sales tax to pay for road improvements.