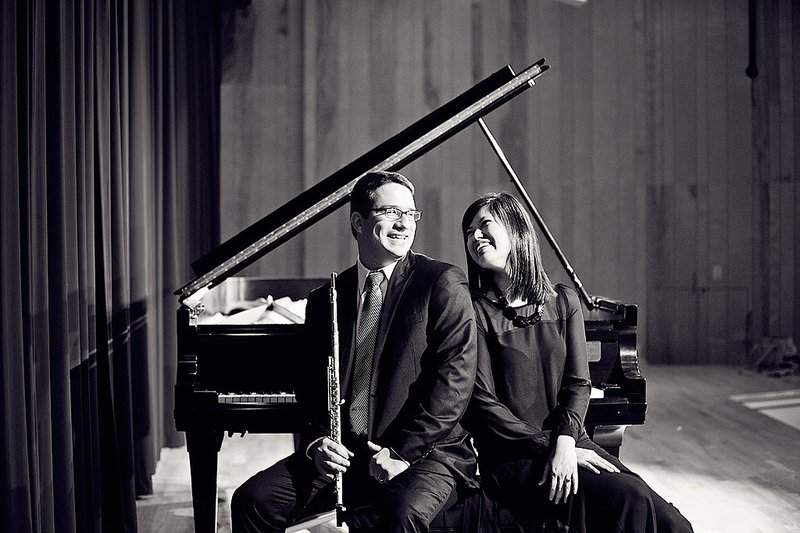 The Hot Springs Music Club will host the concert "A Selection of American Music" at 3 p.m. Sunday at Westminster Presbyterian Church.

The featured performers will be Carlos Feller, flute, and Mary Chung, piano, a husband-and-wife duo who are on the music faculty at Ouachita Baptist University in Arkadelphia, a news release said.

Feller, a native of Brazil, has performed as soloist and chamber musician throughout the United States and abroad. International appearances as a recitalist and clinician include Brazil, Mexico, Honduras, Dominican Republic, Colombia, Costa Rica, France, Italy, and Switzerland. In the U.S., he has performed at past editions of the National Flute Association annual conventions, University of Southern Mississippi, Florida State University, Southwestern Oklahoma State University, Stetson University, and Kansas State University. Feller holds a BM from the Paraná State University in Brazil, and a MM in flute performance from The University of Southern Mississippi, and received his Doctor of Music degree from The Florida State University. He was the prizewinner in competitions such as the William T. Gower Concerto Competition, Music Teacher National Association, and the Flute Society of Kentucky Young Artist competition, the release said.

Feller is a member of the ensemble Traverso Colore, a chamber group dedicated to historically informed performances of baroque music on period instruments. An enthusiast of new music for flute, he has performed at the International Computer Music Conference in New Orleans, at the International Michel Debost Composition Competition in Curitiba-Brazil, and at the XV Biennial Festival of New Music at Florida State University. Feller is the director of the Hot Springs Flute Ensemble in its 37th season, is on faculty at the International Flute Workshop in Roccasecca-Italy, and is the visiting professor of Music at Ouachita Baptist University, the release said.

Chung began playing piano in South Korea and continued with her studies and graduated from the National Conservatory of Music in the Dominican Republic. She holds a Bachelor of Music in Piano Performance from North Greenville University, an MM, and DMA in Piano Performance and Pedagogy from the University of Southern Mississippi. Chung is an active soloist and collaborative artist. She has performed both nationally and internationally, in Canada, France, Italy, Brazil, Puerto Rico, Dominican Republic, Colombia, Costa Rica, and Honduras, the release said.

Her solo awards include first place in the 11th Luis A. Ferré International Piano Competition in Puerto Rico, winner of the William T. Gower Concerto Competition at the University of Southern Mississippi, finalist in the Concerto Competition at the Brevard Music Festival, alternate winner in Mississippi's MTNA Young Artist Auditions, as well as recipient of the Music Teachers National Association's Student Achievement Recognition Award. During her doctoral studies, Chung was the recipient of one of the University of Southern Mississippi Doctoral Assistantship Award, a competitive award for doctoral students who have demonstrated outstanding work.

She has accompanied numerous degree recitals and master classes, as well as state, regional, and national competitions for both singers and instrumentalists. Chung has also served as a pianist for the Southern Opera and Music Theater Company, Hattiesburg Civic Light Opera, Meistersingers, Oratorio Chorus and others.

Chung served as a full-time faculty at The University of Southern Mississippi, as well as Oklahoma Baptist University, as adjunct professor at Belhaven College, piano instructor for Piano Institute at the William Carey University, "Appasionato" Music camp in the Dominican Republic, and at the Blue Lake Fine Arts Camp in Michigan. Chung has served as an adjudicator for piano competitions in Alabama, Mississippi, Arkansas, and Oklahoma. In the fall of 2017, Chung joined the faculty as coordinator of the piano department at Ouachita Baptist University.