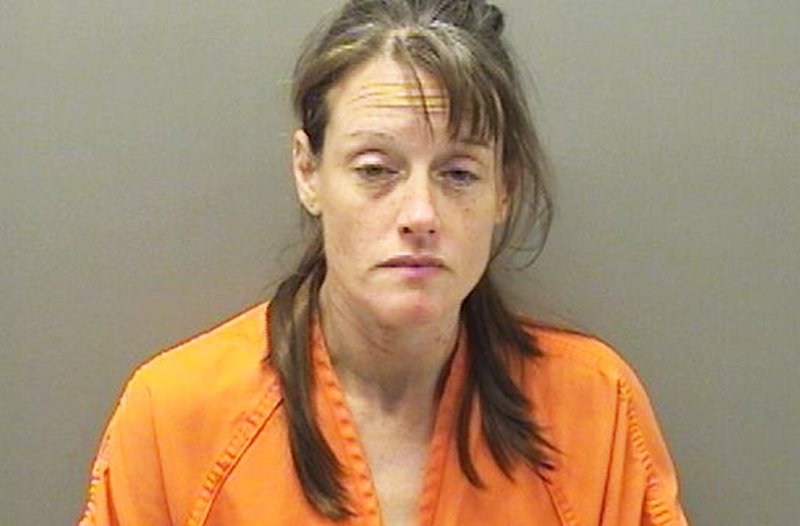 A Hot Springs woman was arrested Wednesday morning on a felony battery charge after allegedly stabbing her boyfriend during an altercation at a local RV park.

Kari Denise Wilcox, 38, who lists an Oaklawn Street address, was booked into the Garland County Detention Center shortly before 10 a.m. Wednesday on a felony charge of second-degree domestic battery, punishable by up to 10 years in prison, and a misdemeanor count of first-degree criminal mischief, punishable by up to one year in jail.

Wilcox was being held on zero bond and is set to appear today in Garland County District Court.

According to the probable cause affidavit, shortly after 3:30 a.m. Wednesday, the Garland County Communications Center received a 911 call regarding a disturbance at Lake Hamilton RV Park, 3027 Albert Pike Road, reportedly involving a man and woman who had stabbed each other and had wounds on their arms.

Garland County Sheriff's Deputies J.D. Crow and Charles DeLaHunt responded to the scene and upon arrival they spoke to the 911 caller who pointed to a woman, later identified as Wilcox, sitting at a picnic table in front of one of the campers.

Crow noted Wilcox, who was holding her left hand which had a yellow sock wrapped around it, refused to answer any questions other than giving her name. Crow then made contact with a man, 37, sitting in a chair inside the camper and noted he had a towel wrapped around his left forearm.

Crow noted the man had a laceration to his forearm and there was blood on the floor of the camper. The man said Wilcox woke him up with a knife in her hand and stabbed him. He said he was able to wrestle the knife away from her and threw it toward the front room where it landed behind a chair.

A male witness, 63, stated the camper was his residence and he was allowing Wilcox and the man to stay with him. He said he woke up to the two of them fighting and "didn't know what was going on," but noted there was "a lot of blood." He said he went to the property manager's office to call 911.

Shortly before 4 a.m., LifeNet arrived and transported Wilcox and the male victim to the emergency room at CHI St. Vincent Hot Springs for treatment.

The man was later interviewed by sheriff's investigators and stated that earlier on Tuesday night he was going to take Wilcox out for dinner but she was "going through one of her episodes." He said he went to sleep around 10 p.m. and then woke up to find Wilcox shaking him with a knife in her hand and noted she had scratches on her neck.

He went to wake up the witness and saw that Wilcox still had the knife in her hand and a cellphone. He said she lunged at him and when he put his arm up for protection she stabbed him. He said he got the knife away from her and the witness left to call 911.

He said Wilcox left the camper and he locked both doors to keep her out. He said she came back at one point and was trying to get in and shattered the glass on the camper door leading to the bedroom. He said he didn't know how Wilcox injured her hand but speculated it may have occurred when he was taking the knife away from her.

Damages to the camper door were estimated at $200. The affidavit notes Wilcox continued to refuse to be interviewed regarding the incident.

Wilcox was previously arrested on Sept. 9, 2017, for a felony count of battery after stabbing the same victim in the back. She pleaded no contest on Nov. 6, 2017, to a reduced count of misdemeanor battery after the victim failed to appear in court. She was sentenced to one year in jail, with all but 58 days suspended, and ordered to pay $620 in court costs.