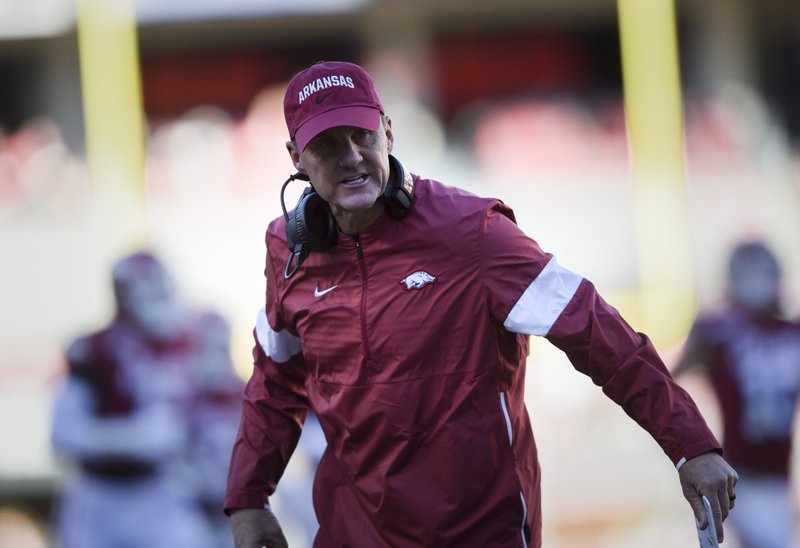 Arkansas head coach Chad Morris reacts during the second quarter of a Nov. 2 game at Donald W. Reynolds Razorback Stadium in Fayetteville. Photo by Charlie Kaijo of the NWA Democrat-Gazette

Other than the homecoming of a former Razorback football player, I see little to recommend Saturday's 11 a.m. Arkansas-Western Kentucky game in Fayetteville.

Then again, the Ty Storey factor might be enough to swing one's decision to attend rather than watch on the SEC Network, where the Razorbacks hang out these days.

On a November Saturday that Alabama and LSU play for college football's No. 1 ranking, Arkansas vs. Western Kentucky is small potatoes nationally. A matchup of 2-7 and 5-4 teams doesn't get the juices flowing unless it becomes a sidebar to breaking news.

A Western Kentucky victory, especially one starring Ty Storey, could bring the curtain down on the Chad Morris era as the Razorbacks' head football coach.

Talk is in the air, especially on sports radio, that Morris' job is at stake in Arkansas' 2019 Fayetteville finale. No matter the financial hardships another coaching buyout might cause the school, I consider it doubtful that Morris earns a third season even if the Hogs beat Western.

Need we remind you of the precedents: Jack Crowe was fired one game into his third season after losing to The Citadel. Bret Bielema had his buttons ripped off after a fifth season-ending defeat to Missourii. Sentiment, like love for Tina Turner in a famous song, is a second-hand emotion in UA athletics: Crowe was zapped on Labor Day Sunday and Bielema on Thanksgiving Friday.

Bielema and Morris have a connection to Storey. Recruited to UA out of Charleston High, where he played offense and defense for a state-championship team, Storey continually had his Razorback career sidetracked by both coaches. One heard that Storey had a hitch in his throwing motion. Another is that with a choice of Arkansas-born quarterbacks, Bielema continually sided with an Allen brother, Brandon or Austin, from Fayetteville High whose father was a loyal soldier in the UA athletic department.

Any notions that Morris is a quarterback whisperer have vanished. He has juggled transfers Ben Hicks and Nick Starkel as starters, neither making anyone forget Bill Montgomery or Joe Ferguson -- or, for that matter, Casey Dick and Tarvaris Jackson. Redshirt John Stephen Jones, getting the nod against Western Kentucky, becomes the sixth starting QB in Morris' 22 Arkansas games.

For one who recites bromides, Morris may not have heard the one about a coach playing multiple quarterbacks because he doesn't have one he can trust. He should listen to a tune from the 1960s by the Lovin' Spoonful about a fellow who has the same dilemma with women: "Did you ever have to make up your mind?" sings John Sebastian. "Say yes to one and let the other one ride."

Jones becomes a starter after relief roles against Alabama (for Starkel) and Mississippi State (Hicks). A Fayetteville man in the media says Jones may not be a dazzler "but he makes plays," earning credibility for quarterbacking Dallas Highland Park to a Texas state championship.

Coached by his dad in high school, Barry Lunney Jr. came to UA from Fort Smith Southside with the same skills. Doing a little of this and a little of that, Lunney started as a freshman and, as a senior, led the 1995 Hogs to the SEC West Division title and league championship game.

Jones gets the call after a terrible Arkansas performance (at least in the first half) against Mississippi State. He and redshirt freshman K.J. Jefferson took turns running the offense in the second half, perking up the few remaining Arkansas fans in Reynolds Razorback Stadium. Jefferson, a freshman from Mississippi's North Panola High, scored a touchdown in the second half of a 54-24 loss to a team from his home state.

Tucker Partridge, in a postgame column for online site arkansasfight.com, was unsparing in his criticism of the head coach, especially after Jefferson executed "the best quarterbacked drive I've seen under Chad Morris."

Partridge wrote, "It's a damning indictment of the entire staff that they can't recognize talent when it's there, and can't coach up that talent if they do see it. Every quarterback who gets the staff's focus gets worse, so I'm almost fearful to see K.J. play any more under this administration."

Arkansas' defense has become a disaster area, the John Chavis-coordinated unit allowing Mississippi State to march up and down the field for 640 yards. The SEC Network, to which UA games are increasingly shunted for lack of mainstream interest, flashed a graphic that the Razorbacks ranked second in the league in missed tackles.

Chavis, who like Morris is in his second UA season, spoke of a pre-existing condition with his unit in a press conference Monday. He was uncharacteristically blunt on a staff that the head coach is frequently vague.

"Let's just tell the truth." Chavis said. "It was broken when we got here and we haven't fixed it quickly enough."

Expounding a bit, Chavis said, "Look at Western Kentucky's roster. They've got eight or nine redshirt juniors starting for them. We've got five or six freshmen that are either starting or playing a lot. That's 18-year-olds versus 22-year-olds. That makes a difference."

It's too late for Morris to make Chavis a scapegoat, a card that the head coach might have played after a head-scratching road loss to Kentucky (which converted a wide receiver to a quarterback).

No, Morris is the face of the franchise, even if Razorback fans increasingly look away as if from a car crash.

Pat Forde, new to Sports Illustrated, wrote this week that Morris "is working hard to put his name among the worst hires in Southeastern Conference history." Don't think that UA recruits aren't reading this or being told by other schools that it's business as usual at Arkansas.

If Hunter Yurachek needed one, Florida State provided Arkansas' athletic director a template on changing coaches when it fired second-year man Willie Taggart after 21 games (9-12 to Morris' 4-17). In 60 years of following Razorback football, the last 40 for a daily newspaper, I never thought that I would be writing these things.

Print Headline: Morris era at Arkansas may be brief