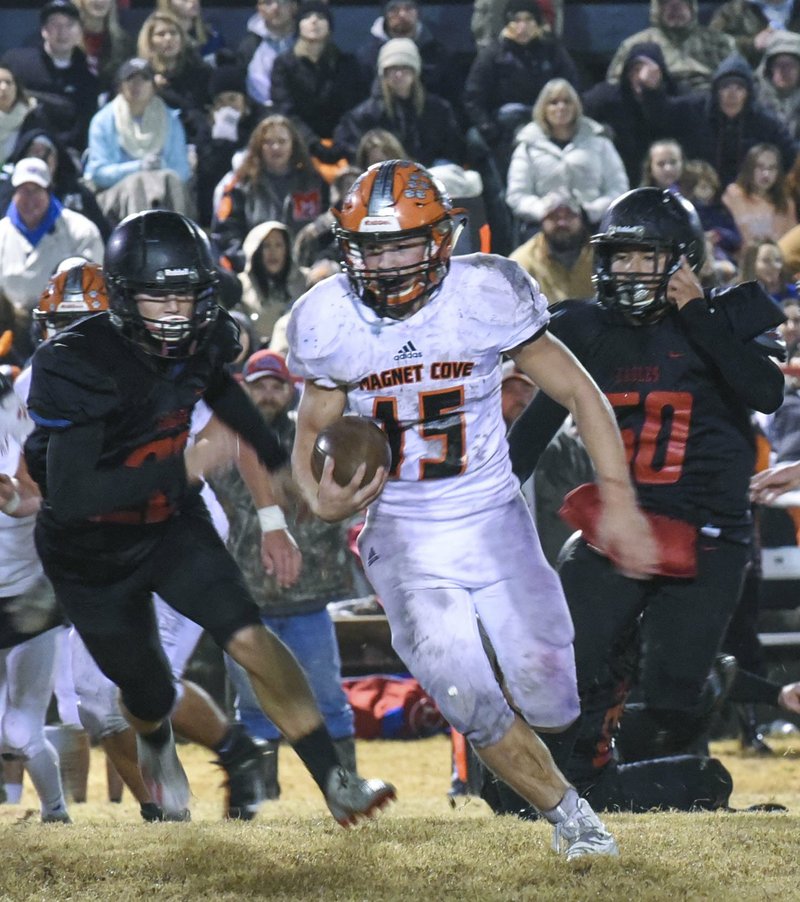 Magnet Cove secured the No. 1 seed out of the 2A-5 conference Thursday night as the Panthers overcame the Cutter Morning Star Eagles 38-20 at Eagle Field.

Leading the Eagles 24-7 at the break, Magnet Cove (9-1, 7-0) worked the ball down the field on a 12-play drive that ended with running back Landon Stone running the ball in from the 1 with 3:14 left in the third quarter as placekicker Alex Ordonez split the uprights for a 31-7 lead.

The Eagles responded with a long drive of their own, with Landon Watson capping the drive with a short run into the end zone with 6:44 off the clock in the final period, but Tyler Mace missed the point-after attempt for a 31-13 deficit.

Magnet Cove's Julius McClellan broke free on a 42-yard run for the end zone to push the Panthers' lead out to 25 points after Ordonez's kick before CMS' Matthew Cook found a hole and rushed in for a 30-yard TD to set the final after Mace's PAT.

After losing a fumble on its opening drive, Magnet Cove held the Eagles to a three-and-out before quarterback Tyler Hodges faked a handoff to Stone and ran up the middle for the 10-yard touchdown to cap a 10-play, 75-yard drive. Ordonez was good with the kick for the early 7-0 lead about two minutes into the first quarter.

Ordonez, who was perfect on his PATs on the night, was also an asset on defense, picking off a second-quarter pass from CMS quarterback Sam Moore. The Panthers made short work of the field with McClellan picking up his first score of the night on a 3-yard run to make it 14-0.

Magnet Cove pushed out to a 21-0 lead with a 1-yard shot by Stone in the second quarter before Keshawn Blevins found a hole for a 5-yard trot into the end zone for the Eagles' first score. Mace's kick made it 21-7 before Ordonez kicked a 32-yard field goal for the 24-7 halftime lead with two seconds left before the break.