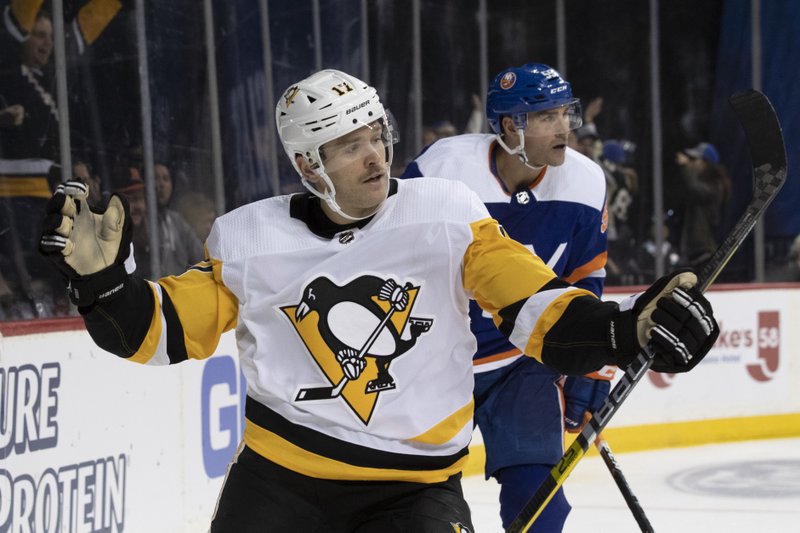 Pittsburgh Penguins right wing Bryan Rust celebrates after scoring a goal against the New York Islanders during the third period of Thursday's game in New York. The Penguins won 4-3 Photo by Mary Altaffer of The Associated Press

NEW YORK -- Bryan Rust scored his second goal of the game in overtime and the Pittsburgh Penguins rallied past the Islanders 4-3 on Thursday night to end New York's 10-game winning streak.

Rust took the puck from Islanders center Brock Nelson behind the net and beat goalie Semyon Varlamov on a wraparound 3:25 into the extra session. Rust extended his points streak to five games.

Pittsburgh erased a three-goal deficit in the third period and ended a three-game skid. Jared McCann had a goal and two assists, Evgeni Malkin also scored, and Matt Murray made 20 saves.

Nathan MacKinnon had a goal and three assists before sitting out the third with an upper-body injury. Cale Makar and Ryan Graves each added a goal and two assists, and Matt Nieto, Matt Calvert Andre Burakovsky also scored.

Alex Ovechkin also scored twice and added an assist, John Carlson had a goal and Braden Holtby stopped 32 shots. The Capitals have won nine of 10 and are 8-1-1 on the road this season.

PHILADELPHIA -- Sean Couturier flipped a shot from the slot that trickled past a surprised Carey Price just 55 seconds into overtime to lift Philadelphia past Montreal.

Ben Chiarot and Shea Weber scored for Montreal. Price made 40 saves and was the first star of the game in a losing effort.

TORONTO -- John Tavares scored at 2:33 of overtime to push Toronto past Vegas.

Playing his second game after missing seven with a broken finger, Tavares took a pass from Mitch Marner on a 2-on-1 and scored his fourth goal of the season, beating goalie Malcolm Subban with a high shot.

Auston Matthews also scored and Frederik Andersen made 37 saves to help Toronto win its third straight game. Max Pacioretty scored for Vegas. Subban made 35 saves in his first NHL start in his hometown.

After Tyler Toffoli tied it for Los Angeles with 8 seconds left in regulation, Pageau scored off his own rebound for his team-leading seventh goal of the season.

Carl Soderberg and Jakob Chychrun scored for the Coyotes.

CALGARY, Alberta -- Noah Hanifin had a goal and two assists and Calgary scored four times in the second period to beat New Jersey.

Hanifin completed his first three-point game with Calgary and the fourth of his career.

RALEIGH, N.C. -- Pavel Buchnevich had a goal and an assist and Henrik Lundqvist made a season-high 45 saves in New York's victory over Carolina.

Artemi Panarin, Brendan Lemieux and Adam Fox also scored for the Rangers. Dougie Hamilton and Sebastian Aho scored for Carolina. The Hurricanes had a 47-18 shots advantage, including 22-6 in the first period.

CHICAGO -- Patrick Kane had a power-play goal and two assists and Corey Crawford made 36 saves in Chicago's victory over Vancouver.

SAN JOSE, Calif. -- Logan Couture had a goal and three assists, Evander Kane scored his team-leading 10th of the season and San Jose held off Minnesota.

Tomas Hertl added a goal and two assists for the Sharks in their second consecutive win after dropping five straight and seven of eight.

Eric Staal had a goal and two assists for the Wild, who lost for the fourth time in five games.

Minnesota trailed 6-2 midway through the third period before scoring three straight goals -- the first two in a span of 74 seconds. Brad Hunt got his fifth goal and Ryan Donato his first for the Wild. Justin Zucker's fifth with 4:35 left cut it to 6-5.

Sharks goalie Martin Jones made 21 saves, highlighted by a terrific stop of a potential tying goal with just under 2:30 left, when he got his pad on Zach Parise's shot in front.

Timo Meier, Marcus Sorensen and Radim Simek also scored for the Sharks, who led 4-0 after the first.

Luke Kunin had a goal for the Wild. Devan Dubnyk made 17 saves in the final two periods after replacing Alex Stalock.