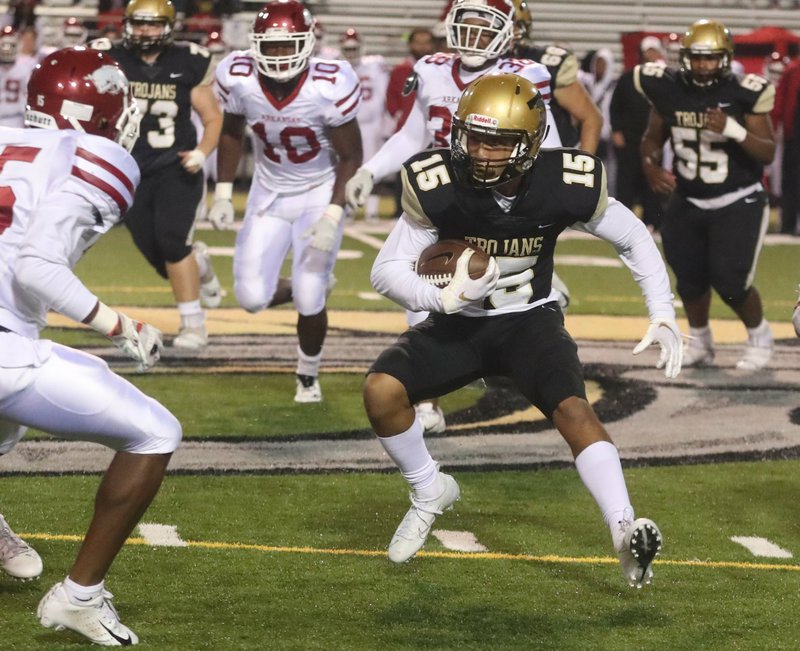 The annual city championship game between Hot Springs and Lakeside is finally here, and for the first time in years, the game has plenty of implications riding on it.

Lakeside currently has control of the conference as the only team with one conference loss, but Hot Springs is in a four-way tie for second place in a classification where only the top four teams in the league progress into the postseason. A win by the Trojans earns them the conference title while a loss could leave the Trojans at home while the Rams have a home game in the first round of the Class 5A state tournament either way.

"Unfortunately we're in this situation because, you know, we didn't take care of our business," said Hot Springs head coach Darrell Burnett. "We've lost some close games. You hate to look back, but you lost the Magnolia game by 3. We were in the red zone seven times and only scored two.

"So we've been telling them all week, although it's a do-or-die game, ... we're 21 points from being 8-1. A touchdown here and there on defense, special teams, offense, we're three touchdowns from 8-1, so everything now is your steps, your eye-discipline, where your hand placement is -- the little things that some kids overlook, coaches overlook at the end of the year. It's going to all come out, especially in the championship game."

"It's a special week, like you said, regardless of record, and just to be able to play against a school that's in your conference but also that your team has grown up playing against," said Lakeside head coach Jared McBride. "It makes for a special night, regardless of home or away, and we expect that same environment this year.

"There's as much to play for as we've had, probably ever since I've been here with this team. It always means a bunch to us, but this is a little bit more, you know. We've still got that goal of conference champion, and we've got to win to be able to accomplish that."

Burnett said that while his team has faced off against the Rams year in and year out, with all that is riding on the outcome, he is trying to make sure it does not become too big for the Trojans.

"It don't hit you until right before you run out," he said. "Lakeside's on the opposite side of the field, and you've got all your family and friends there watching. It's senior night. The thing is, they've been in the situation, so we got to make sure as coaches we do a great job putting our kids in defensive situations to make sure the moment is not too big because you're still dealing with kids at the end of the day.

"We've got to make sure our kids are ready. We've got to do whatever we can on our end to put them in the best situation to succeed, but I think they know, the community knows, everybody knows how big of a game it is."

Burnett said that the key to success for the Trojans is to secure the Rams' running game while keeping an eye out for an aerial attack.

"First of all, it starts with the run game, but you've gotta be smart," he said. "You know, you've gotta be smart with how you're going to stop certain running plays because, like I said, they've got an electric receiver in [Chase] Cross. I love watching that kid. He's explosive. Man, he competes his butt off, and then you got another kid over there, No. 6 [Logan White], that's good. Their H-back is physical. They've got weapons. It's no different than playing your Texarkanas and your Camden Fairviews."

McBride said that the Trojans' gameplay is similar to what Lakeside runs.

"They're a lot like us, as far as the style of play offensively and defensively," he said. "For us on the offense side, we're going to have to put some drives together and put some points on the board. They play very fast and physical on defense, but our defense does the same. We're going to have to be able to keep them corralled and keep attacking and create some turnovers like we have all year."

Another issue that Burnett has been focusing on throughout the season has been dealing with "shooting ourselves in the foot."

"That's probably one of the frustrating things," he said. "I know it's frustrating. ... You can do some good on first down. False start, second down, and now you're back to second and 10, second and 9, second and 11, and it puts you behind.

Both coaches said that their teams are healthy and ready to go for tonight's 7 p.m. kickoff.

Print Headline: Plenty to play for as Troy hosts Rams