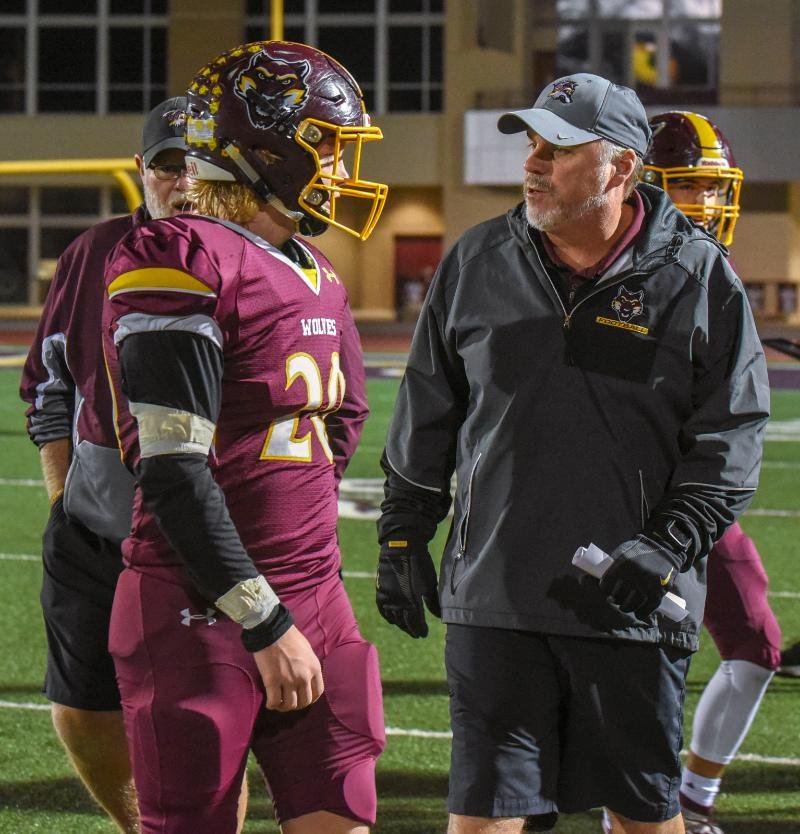 Lake Hamilton head coach Tommy Gilleran, right, talks with Izaiah Clenney during a break in the action in the Wolves' game against Benton at Bank OZK Field. - Photo by Grace Brown of The Sentinel-Record

Lake Hamilton has the chance to earn its first No. 2 seed in the 6A West under head coach Tommy Gilleran tonight as the Wolves host Greenwood at Bank OZK Field.

After suffering their first defeat of the season against the Benton Panthers (6-3, 6-0), the Wolves (8-1, 5-1) have a chance for a bye week going into the Class 6A playoffs with a win over the Bulldogs (8-1, 5-1). Gilleran has directed his team's attention to adjusting some ground mistakes.

"Any time you lose, you refocus and get things right -- the things you weren't very good at," Gilleran said. "It's really made us refocus."

Junior quarterback starter Layne Warrick's sudden foot injury at Sheridan two weeks ago has put the Wolves in a tricky situation moving forward as senior Zach Bradley has stepped into the position.

"Any time you lose a guy -- he started nine or 10 games last year and eight this year -- it makes a huge difference," said Gilleran. "Any time you do that, an 18-game starter, and put in a guy that hasn't started ever, it's a huge difference in a ballgame. We felt like last week, especially with Layne out, we had to really run the ball a lot more and not throw the ball as much. I thought Zach did a good job of coming in the game and throwing it when he needed to; he's gotten better as the week's gone on."

The Bulldogs collected their ninth state title last year and fell in an Oct. 25 game to Benton in their first conference loss since 2014.

"[We match up with Greenwood] probably better than ever," Gilleran noted. "Since I've been here, we finally strength-wise can handle the front. We're better on defense than we've been in a long time, and overall we feel more apt to handle what they're doing. And I don't think they're as good as they've been either. Two years ago, they had a nose man that nobody could block, and then last year they had a defensive tackle that was phenomenal.

"Offensively, they had a quarterback that could run, throw and everything, so he was a hard person to stop. Of course, he was pretty good because they went on and won a state title. They were a really good group, and they've already lost once this year."

Senior quarterback Jace Presley has completed 220 of 303 passes for 2,512 yards while junior running back Hunter Wilkinson has logged 130 carries for 750 yards this season. Senior Jordan Hanna leads in defense with 84 tackles, and Eli Martin follows with 80.

"Their defensive line are all pretty good -- none of them bad," Gilleran mentioned. "They're all pretty good. There's not one that's so dominant that you have to worry about not running at them. The linebackers are good, too, and they look like they're two-year starters. Offensively, they have a new quarterback. The running back was a sophomore last year, so he's a junior, and he's a pretty good hand. They have a couple receivers that are back.

"Offensive line -- there are some new guys there, so that's probably where they're newest at. They do a good job like they always do or they wouldn't be 8-1, so we've got to match their intensity, play hard and not have any mistakes."

The Bulldogs like to use screens and laterals to get the ball in play quickly, which is something that Lake Hamilton has been working to defend in practice this week.

"Offensively, they get off blocks well and they pursue the ball real well, so we've got to stand our blocks really long and know that they're gonna pursue and get down the line," Gilleran said.

Sophomores Owen Miller and Tevin Woodley have dominated Lake Hamilton's running game with Miller tallying 156 carries for 1,401 yards and Woodley with 151 touches for 1,045. Junior Trent Singleton makes his comeback to the field as corner for tonight's matchup.

"Definitely need to match the intensity or overmatch it, so we can play well," said Gilleran. "There's always a push right at the beginning, and we've got to make our push back and make sure our kids are ready to play."