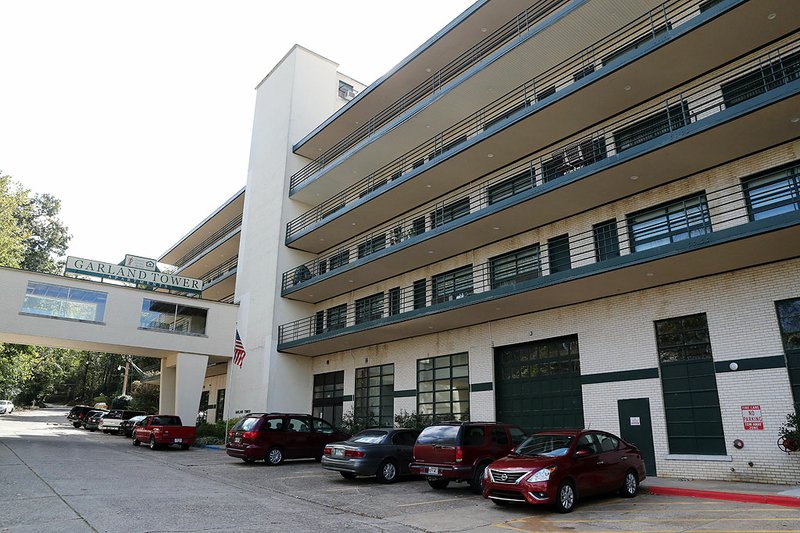 Water samples collected from Garland Towers, 126 Oriole St., were tested for viable Legionella bacteria after two residents were reported to have contracted Legionnaires' disease. - Photo by Richard Rasmussen of The Sentinel-Record

The samples were taken after two residents of the Oriole Street apartment complex were diagnosed with Legionnaires' disease, a waterborne form of pneumonia the Health Department said older people in poor respiratory health are susceptible to.

Hot Spring residents have accounted for 10 of the 52 cases diagnosed in Arkansas since the start of the year, the agency said. The National Park Service recommended last month that all building owners/lessees in Hot Springs National Park discontinue using showers connected to thermal water sources after Legionella bacteria were detected at Quapaw Baths & Spa.

The bacteria infects the lungs through water vapor from showers, faucets, hot tubs and water-based heating and cooling systems.

Preliminary test results of the Garland Towers samples showed the presence of the disease's enabling bacteria, but the most recent results confirmed their viability.

"We did six samples and two of them got a colony, which means there was at least one organism in the sample," Dr. Jennifer Dillaha, the Health Department's medical director for immunization and outbreak response, said. "That's a very low number, but in this setting, where you have a lot of people with risk factors in the building, it's concerning. We can't prove (the diagnosed cases) got Legionella from the building, but it's entirely possible that they did. "

The current owners acquired the building from the Garland County Council on Aging in 2006. The Health Department said the age of most of the tenants puts them at risk.

Dillaha said Belmont Management Co., the Fort Smith landlord that's part of the group that acquired the property in 2006, has been amenable to the department's recommendations, which include commissioning a water management plan. She said the plan would focus on the building's boiler. The water-based heating systems are often fertile breeding grounds for Legionella bacteria, she said.

"There's other places in Arkansas and around the United States that have these types of complex water systems," Dillaha said. "The most important thing is the need for a water management plan. They need to contract with a company that can do a thorough assessment of the building and make recommendations specific to the building on handling water.

"(Belmont) is very concerned about their residents and have been supportive in everything we've asked them to do."

An early diagnosis is critical to heading off the bacteria's most pernicious effects, she said, as the proper course of antibiotics can be prescribed once the disease has been identified.

"The antibiotics can really help," Dillaha said. "I think it's important for people to know if they have the risk factors that they communicate that with their doctor if they get sick. Then the right test can be ordered, and it can be diagnosed early."