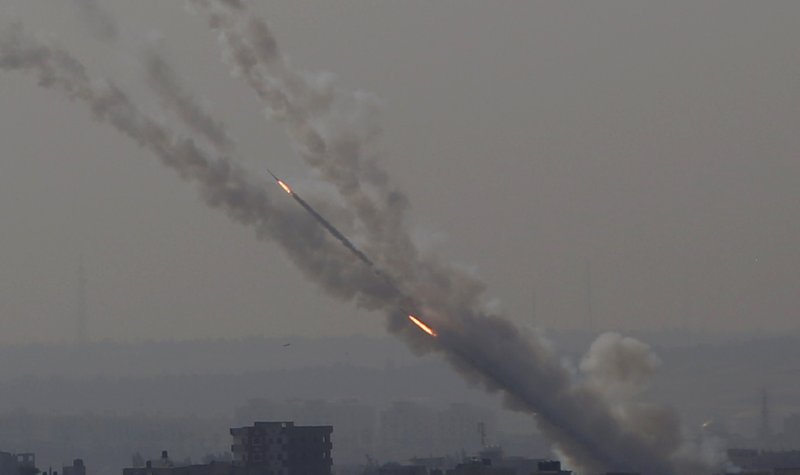 Rockets are launched from Gaza Strip to Israel, Tuesday, Nov. 12, 2019. Israel killed a senior Islamic Jihad commander in Gaza early Tuesday in a resumption of pinpointed targeting that threatens a fierce round of cross-border violence with Palestinian militants. (AP Photo/Hatem Moussa)

JERUSALEM -- Israel on Tuesday targeted two senior commanders from the Palestinian militant group Islamic Jihad, killing one in the Gaza Strip and missing the second in Syria as it stepped up its battle against Iran and its proxies across the region.

The death of Bahaa Abu el-Atta and his wife as they slept in their home in eastern Gaza set off the heaviest fighting in months between Israel and Islamic Jihad, an Iranian-backed militant group that is even more hard-line than Gaza's Hamas rulers. Gaza militants fired scores of rockets into Israel throughout the day, some reaching as far as Tel Aviv, while Israeli warplanes responded with a series of airstrikes on Islamic Jihad targets. Eight others were killed, including at least seven militants.

"Whoever thinks that it is possible to hurt our citizens and evade our long arm is mistaken," Prime Minister Benjamin Netanyahu said at a meeting of top security officials at Israeli military headquarters in Tel Aviv.

He described Abu el-Atta as a "ticking time bomb" and "the main instigator of terrorism" from Gaza, responsible for many rocket attacks on Israel and planning more.

He said the killing had been approved 10 days earlier, and that Israel had waited for the "optimal conditions" to hit him while minimizing civilian casualties. He said Israel was not interested in escalation but warned: "This could take time."

Egypt, which frequently mediates between Israel and Gaza militants, was working to de-escalate tensions, according to officials in Cairo. The officials spoke on condition of anonymity because they were not authorized to talk to the media.

In a possible sign the fighting could be brief, Gaza's ruling Hamas militant group did not take part in Tuesday's rocket fire. Although larger and more powerful than Islamic Jihad, Hamas is also more pragmatic. With Gaza's economy in tatters, it appears to have little desire for another round of fighting with Israel.

Netanyahu has repeatedly said in speeches in recent weeks that Iran, Israel's archenemy, is becoming increasingly aggressive across the region and vowed to strike back.

Iran has forces based in Syria, Israel's northern neighbor and supports Hezbollah militants in Lebanon. In Gaza, it supplies Islamic Jihad with cash, weapons and expertise. Netanyahu has also claimed that Iran is using Iraq and far-off Yemen to plan attacks against Israel. Hamas also receives some support from Iran.

Israel frequently strikes Iranian interests in Syria. But Tuesday's airstrike in Damascus appeared to be a rare assassination attempt of a Palestinian militant in the Syrian capital.

Syria's state-run news agency said Israeli warplanes fired three missiles at the home of Akram al-Ajouri, a member of Islamic Jihad's leadership living in exile. Ajouri was not harmed, but his son and granddaughter were killed, the report said. The Israeli military had no comment.

The airstrike came at a sensitive time for the Israeli leader. After two inconclusive elections this year, Netanyahu heads a caretaker government and is fighting for his political survival ahead of a possible indictment on corruption charges.

After Netanyahu failed to cobble together a parliamentary coalition following an election in September, his chief rival, Benny Gantz, is now trying to form a government.

Despite their bitter rivalry, the two projected a message of unity on Tuesday. Gantz, a former military chief who led a 2014 war against Gaza militants, said he had been consulted by Netanyahu ahead of the overnight airstrike and called it the "right decision."

Both men have expressed support for a unity government between their parties in order to avoid yet another election. But both have demanded that they lead the government.

A successful military operation could bolster Netanyahu as he seeks to stay in power -- especially if he is indicted on corruption charges, as expected, in the coming weeks.

Netanyahu has sought to portray himself as the only leader capable of steering Israel through its many security challenges. Remaining prime minister would leave him in the best position to fight any charges, since all other Cabinet ministers must automatically resign if indicted.

Efraim Inbar, president of the Jerusalem Institute for Strategy and Security, said protracted fighting could push the two men toward compromise. "It could be used as a moment for a national unity government," he said.

But Stav Shaffir, a lawmaker with the dovish Democratic Union, questioned the timing and motives of the killing. "It's hard not to ask questions about timing," she tweeted. "Above every decision hovers a cloud of suspicions."

The Gaza airstrike killed Abu el-Atta as he slept at home, destroying the top floor of his apartment building. Abu el-Atta's relatives and the Islamic Jihad said Abu el-Atta's wife was killed and the two wounded were their children.