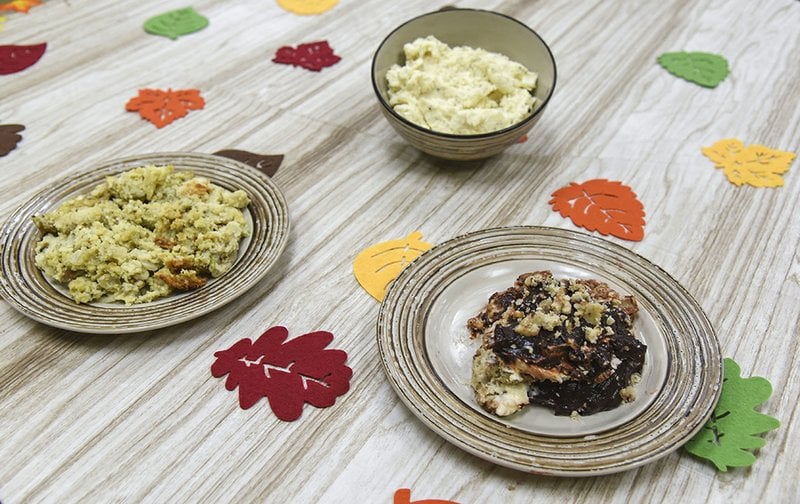 The completed dishes cooked for the first installment of HER Around the Table, country dressing, creamy mashed potatoes and chocolate delight are displayed on a table. -Photo by Grace Brown of The Sentinel-Record

Gather around the table and join us as we celebrate Thanksgiving with some of the HER staff's favorite holiday family recipes, straight from our table to yours. For our first attempt, we decided to keep it simple and include easy-to-make side dishes and a dessert that are sure to complement any holiday potluck dinners. For these quick and easy recipes, you will need an Instant Pot, crockpot, and access to an oven. Other than that, it is as simple as a quick trip to your local grocery store. So grab your apron and prepare to be amazed by our fast, family recipes.

1 cup half and half

Cube potatoes and place into the Instant Pot filled about 3/4 of the way with water and salt to taste. Set the Instant Pot to cook on high pressure for 10 minutes and then release pressure value. Add in cream cheese and butter and begin to whip with an electric hand-mixer. Slowly add in half and half and shredded cheese. Mix until creamy. Depending on the desired texture, you can adjust the amount of half and half used in the recipe. Salt and pepper to taste.

8 slices of slightly dried out bread

Crumble bread and cornbread. Add all ingredients into a large crockpot and dot with butter. Cover and cook on high for two hours. This can also be cooked on low for three to four hours.

Mix the flour, butter, and pecans together and spread on bottom of a 9x13 inch pan. Bake for 15 minutes at 350 degrees or until browned.

Mix pudding and milk well and spread mixture over the second layer. Place in the refrigerator to chill.

Top with pecans and serve.

Print Headline: Holiday favorites with HER