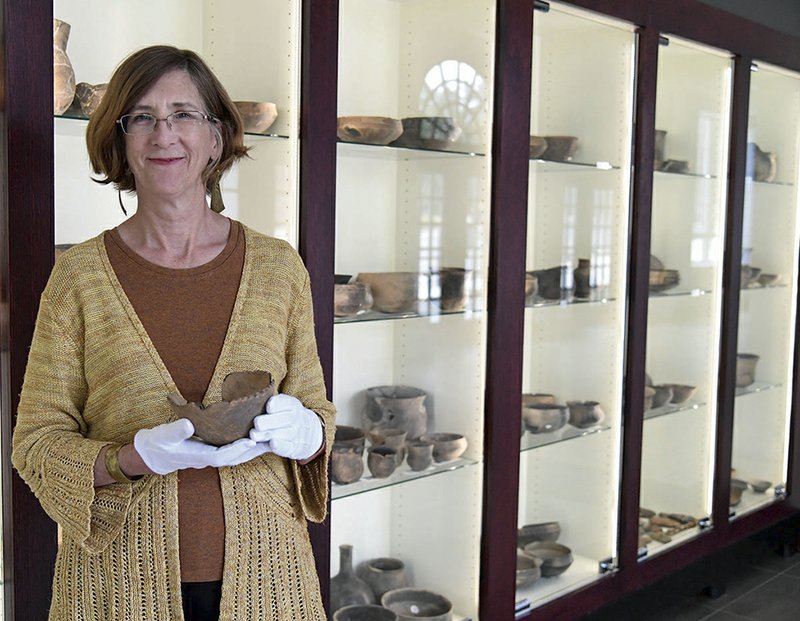 Mary Beth Trubitt, Ph.D. and professor at Henderson State University displays a piece of Native American pottery as she stands in front of a display case at the university. -Photo by Grace Brown of The Sentinel-Record

Originally from Massachusetts and a graduate of Northwestern University, Mary Beth Trubitt, Ph.D., has been at Henderson State University since 2000, where she teaches World Cultures, North American Indians and Introduction to Physical Anthropology and Archaeology in the school's sociology department.

"What drew me in as a young person I think was anthropology and art history. I had a class that included archaeology in high school and I guess I just got hooked. But what keeps me interested all these years later is the puzzling out what went on in the past and trying to figure out from these little bits and pieces what went on at a particular site, who lived there, how they lived, and how they changed and how things changed over time. I find it fascinating," she said.

She said that the Ouachita River Valley area has been estimated to have been consistently inhabited for about 12,000 years by various groups or people. The most recent Native American inhabitants were members of the Caddo tribe, though.

"This part of Arkansas is Caddo Indian homeland. The Caddo Indians lived in southwest Arkansas, northwest Louisiana, northeast Texas and eastern Oklahoma. Before the French and Spanish came, there were Caddo Indians living around here until about 1700 A.D.," Trubitt said.

According to her, Caddos were farmers and villagers, with settlements spread out along the banks of the Ouachita River in order to be near plentiful water sources for their gardens and to take advantage of fishing opportunities.

"From about 2,000-1,000 B.C. on, people were farming this area. There are different kinds of crops that they farmed, some of which we do still use now," Trubitt said.

Pottery was linked to farming and cooking developments, and after about 3,000 years ago, Caddo pottery began, she said.

"The Caddos are known for their beautifully decorated pottery," Trubitt said.

"It has a consequence that in the late 1800s and early 1900s, people were digging into sites specifically to find pottery to collect. So it has lead to a lot of destruction of sites. Nowadays, a lot of the conversations we have with the Caddo are about repatriating grave goods from some of these early collections."

Construction of earthen mounds was a hallmark of the Caddos, and served as "a central part of those communities" and would have been "the religious center," she said.

As for social organization, the Caddo society was not an egalitarian one.

"The Caddos had a social hierarchy. Not everyone was the same. Some people had elevated roles, and elevated knowledge and religious and political leadership," Trubitt said.

Within the Caddo hierarchy, women inhabited and important sphere and took on vital roles.

In her essay titled "Indian History in the Lake Ouachita Region," Trubitt states that oral tradition says the first Caddo woman emerged onto the surface of the earth carrying corn and pumpkin seeds.

"The Caddo and other Southeast Indian groups were historically matrilineal. Usually, the women were the ones who were doing a large part of the farming, so they had a strong economic role in society. Access to farmland passed through the women's line. Typically, there would be a core group of women, and husbands would marry into the community rather than wives marrying out of the community," she said.

"Women traditionally had a strong role and a lot of influence both as younger women and also as elders. Nowadays, this is still the case. Oftentimes, a lot of women who are active on the elected council, currently the chair of the tribe is a woman. So women still have a strong political role and a strong voice in the Caddo community."

The earliest European contact the Caddos would have had would have been the DeSoto expedition in the 1540s, she said.

"After that, we still see Caddo sites continuing on for a good 100 years, maybe 150 years after that. So there's not this real precipitous decline after DeSoto, like in northeast Arkansas where it seems like there (were) some real dramatic effects. Here, we have a population continuing on until about 1700 in the Ouachita Mountains, at least until 1650," Trubitt said.

According to her essay titled "Indian History in the Lake Ouachita Region," more European contact via Spanish missionaries and French traders took place in the late 1600s and early 1700s.

"Then, it looks like people start moving south toward the Red River Valley. There's not this dramatic die off or anything, but people do start pulling south, and it's probably due to a couple of different reasons," Trubitt said. She cited trade with the French in Louisiana and migrating to avoid other, more aggressive groups pushing into Caddo territory, such as the Osage.

Consequently, when the Dunbar and Hunter expedition came through the area in 1804, "there's not really anyone around," Trubitt said.

Today, the Caddo Nation's population numbers around 5,000, according to Trubitt, and is based in Binger, Okla.

"The Caddos are still here. They're still around. They're not gone and past and over. They're here," she said.

"It's good to remember that this place has a long history and we are the most recent generation to live here, but we're connected to the land, and that connects us to those earlier generations that go back not just 200 or 500 years, but thousands of years."