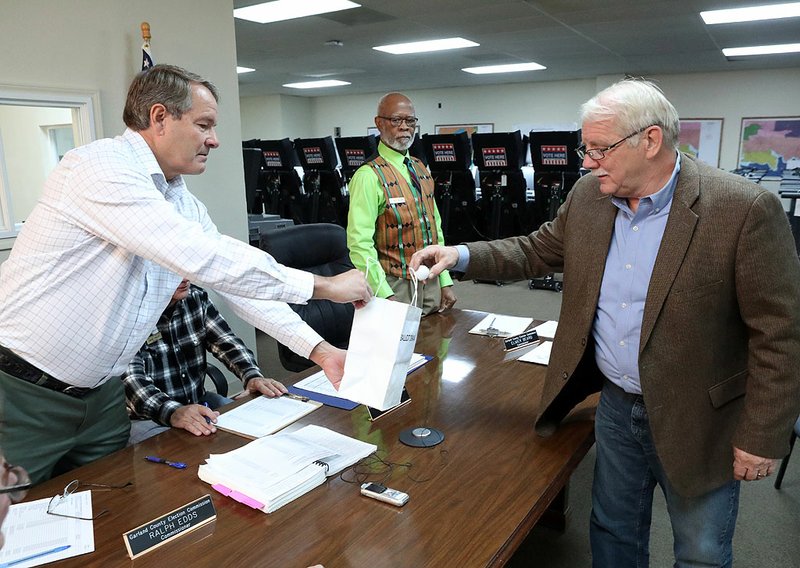 The Republican ballot for House District 22 voters in the party's March 3 primary will have two elections for the same office, an oddity the Garland County Election Commission said could cause confusion.

The House's expulsion of Mickey Gates from the District 22 seat last month led the governor to call for a March 3 special election for the final year of Gates' third term. The Legislature scheduled the 2020 preferential primaries and nonpartisan general election for the same day.

Republicans Jack Wells and Richard McGrew will vie for their party's nomination in a Dec. 10 primary. The winner will advance to face Libertarian Judy Bowers in the March 3 special election. Wells, McGrew and Richard Alvin Midkiff will also be on the ballot in the Republican Primary, with the winner qualifying for the Nov. 3 general election against Bowers.

Haley said ballot position for the March 3 special election will be drawn Dec. 18.

All five locations are in District 22, which comprises east Garland and north Saline counties and Hot Springs Village.

Haley said the five elections being held March 3 will require 75 different ballot styles. The election commission has until Jan. 16 to deliver absentee ballots to the county clerk's office, according to the secretary of state's election calendar. Early voting begins Feb. 18., and the registration deadline is Feb. 3.

Registered Garland County voters who are interested in being poll workers can call the election commission at 622-3622. Training for current poll workers is scheduled for Tuesday.

The election commission drew from a bag of 24 numbered Ping-Pong balls to determine ballot position. The following are the contested races with the candidates' names listed as they will appear on the ballot:

Justice of the Peace Richard McGrew

Justice of the Peace Richard McGrew