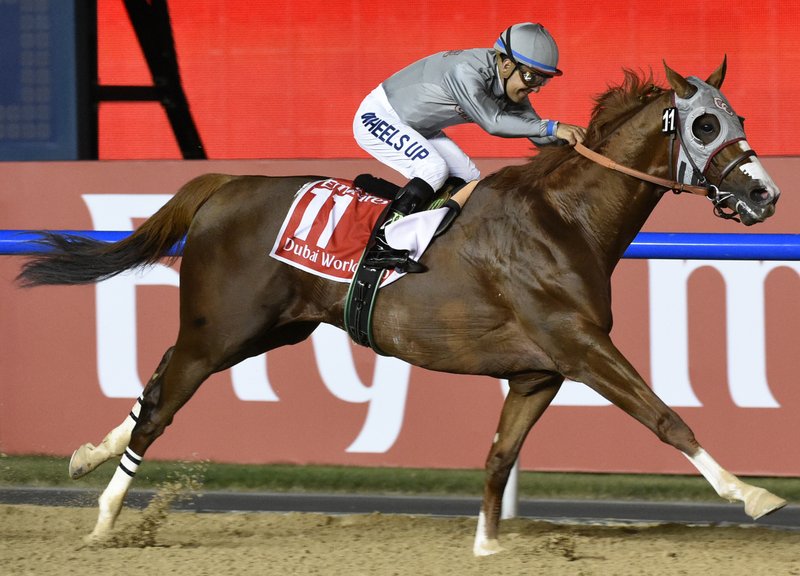 The Associated Press "CHROME" FAVORITE: In this file photo, California Chrome, ridden by Victor Espinoza, wins the Dubai World Cup horse race at Meydan Racecourse in Dubai, United Arab Emirates. California Chrome was the biggest winner at the Eclipse Awards on Saturday night taking home three trophies celebrating his accomplishments in 2016 - including Horse of the Year for the second time. He also won an Eclipse as the best in the older dirt male division, and his victory at the Dubai World Cup was picked as the National Thoroughbred Racing Association's moment of the year. - Photo by The Associated Press

California Chrome may be the most popular horse in the Breeders' Cup era not to win a world-championship race.

Named for his native state and four white stockings, the two-time Horse of the Year developed a tremendous following as the richest Kentucky Derby winner in history. The chestnut-colored horse posted seven Grade 1 victories including the Preakness, Pacific Classic and Dubai World Cup in a career that he earned $14,752,650.

Many of California Chrome's fans were saddened to learn Wednesday that the 8-year-old son of Lucky Pulpit has been sold to Japanese interests. The sale is subject to the Japanese government's quarantine and exportation requirements being met, Kentucky-based Taylor Made Stallions announced.

The colt's stud fee for 2020, when his first crop of racing age arrives, will be $30,000. California Chrome and 2007 Arkansas Derby winner Curlin are the only two-time horses of the year at stud.

"We were approached by representatives of the buyer, and being that California Chrome is owned by a 50-share syndicate, the offer was presented to the shareholders for a vote," said Taylor Made's Duncan Taylor. "Ultimately, the results were in favor of moving forward with the sale.

"California Chrome is the best horse we have ever owned, and he will now have the opportunity to have offspring performing in three different countries."

Taylor Made said California Chrome can live out the remainder of his life at the farm upon retirement from breeding.

Arkansas horseman Willis Horton is among the buyers of California Chrome's first yearlings, which according to a Taylor Made Farms online ad have sold for up to $325,000.

Eclipse Award-winning trainer Chad Brown sings the colt's praises: "Chrome was a great horse. He could handle any distance, won Grade 1s on dirt and turf, and earned over $14 million. ... That is the kind I want to train. I am looking forward to seeing his yearlings."

Racing in the silks of breeders Steve Coburn and Perry Martin, and trained by Art Sherman, California Chrome dead-heated for fourth in the 2014 Belmont Stakes when poised to become fhe first Triple Crown winner in 36 years. He ran behind two Bob Baffert-trained winners in the Breeders' Cup Classic, third to Bayern in 2014 and runner-up to Arrogate in 2016. California Chrome was retired after losing a rematch with Arrogate in the 2017 Pegasus World Cup.