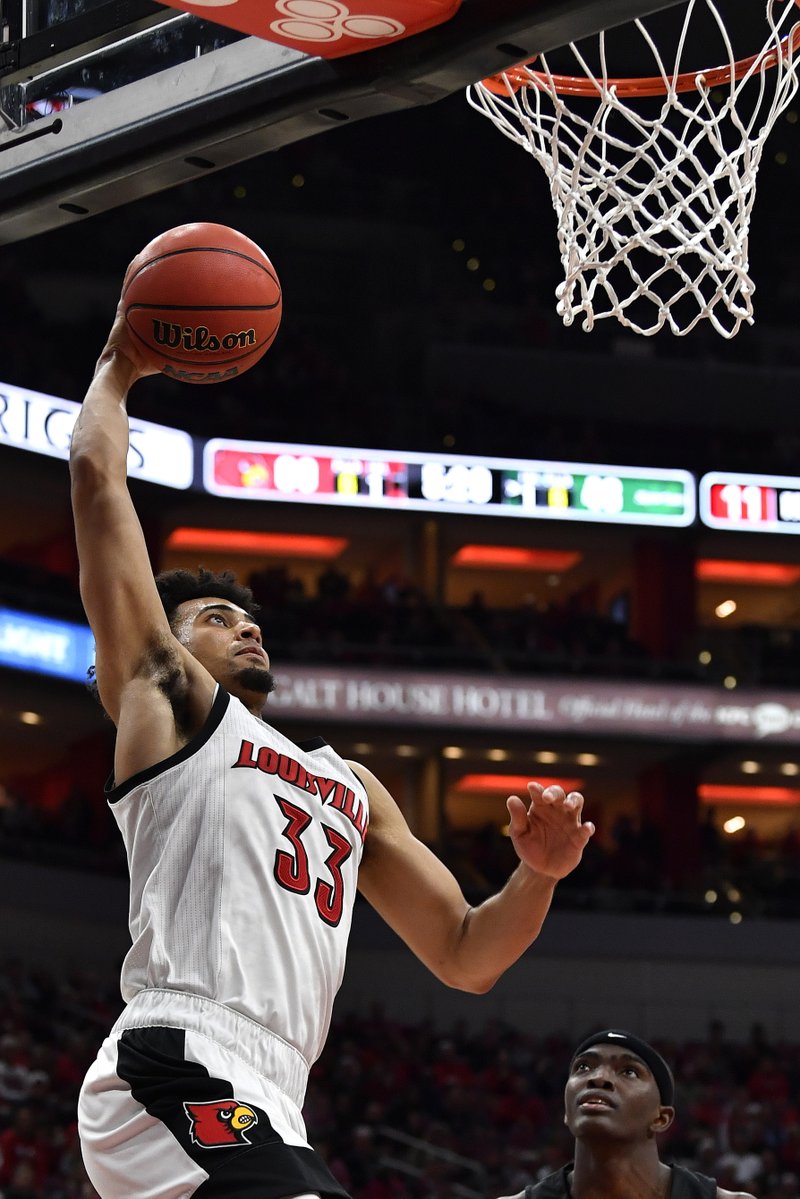 Louisville forward Jordan Nwora (33) goes up for a layup during the second half of Wednesdays' game against South Carolina Upstate in Louisville, Ky. Louisville won 76-50. - Photo by Timothy D. Easley of The Associated Press

LOUISVILLE, Ky. -- Ryan McMahon made consecutive 3-pointers and Dwayne Sutton and Darius Perry had one each during a second-half surge that rallied No. 2 Louisville past USC Upstate 76-50 Wednesday night.

Trailing the determined Spartans 43-40 with 14:07 remaining, Sutton's 3 tied it before McMahon added one after a huge block of Josh Aldrich's layup attempt. McMahon and Perry followed again from long range, and the Cardinals (5-0) turned up the intensity on both ends for a 24-5 burst.

Jordan Nwora had two 3s among his 28 points. The Cardinals finished 51% from the field and have shot above 50% in each game this season.

MEMPHIS, Tenn. -- Precious Achiuwa had 16 points and 12 rebounds, and Memphis beat Arkansas-Little Rock after star freshman James Wiseman was cleared by the NCAA to return to the court Jan. 12.

The game was played only hours after the NCAA ruled Wiseman, the Tigers 7-foot-1 center and last season's top recruit, ineligible for the next 11 games for receiving impermissible benefits from Memphis coach Penny Hardaway. Wiseman's family received $11,500 from Hardaway to help with moving expenses from Nashville to Memphis two years ago, before Hardaway became the Tigers' coach. Wiseman played for East High, where Hardaway coached.

The NCAA considered Hardaway a university booster because he donated $1 million to the university in 2008. Wiseman watched the game from the bench.

Anthony finished with nine points, 10 rebounds and a season-high eight assists for North Carolina (4-0), which hasn't had a player with a triple-double since Brendan Haywood and Jason Capel each did it 10 days apart in December 2000.

Garrison Brooks added 14 points for the Tar Heels -- 30½-point favorites who a year ago beat Elon on the road by 49 points. They trailed at halftime for the second time this season before opening the second half with a Bacot-led 21-5 run that pushed the lead into double figures, and wound up outrebounding Elon 56-25.

Marcus Sheffield scored 19 points for the Phoenix (2-3), who lost their third straight -- all to power-conference schools -- while shooting 28% in the second half.

Tennessee (4-0) owns the longest active Division I home winning streak. The Vols haven't lost at Thompson-Boling Arena since falling 94-84 to Auburn on Jan. 2, 2018.

Lamonte' Turner added 13 points and six assists for Tennessee. Turner is averaging 8.5 assists this season and entered the night ranked second among all Division I players in that category.