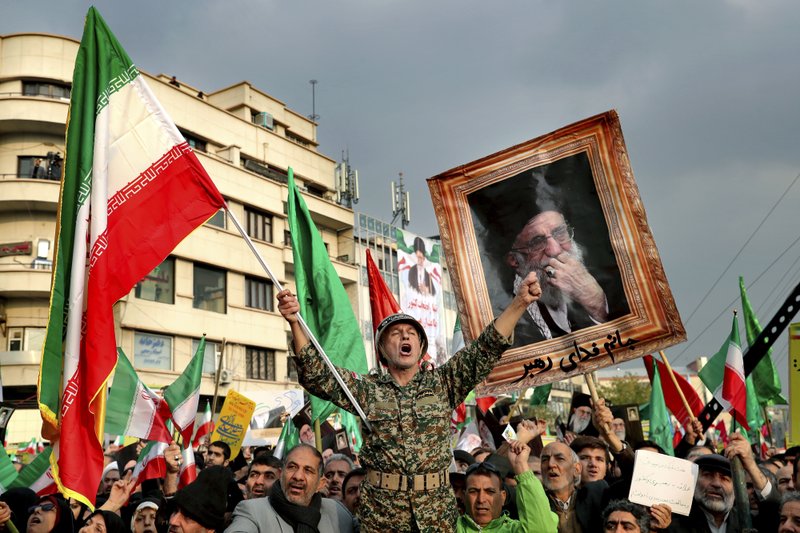 DUBAI, United Arab Emirates -- The head of Iran's Revolutionary Guard threatened the U.S. and its allies Monday as he addressed a pro-government demonstration attended by tens of thousands of people denouncing last week's violent protests over a fuel price hike.

Gen. Hossein Salami, echoing other Iranian officials, accused the U.S., Britain, Israel and Saudi Arabia of stoking the unrest. He said the rise in gasoline prices was a "mere pretext" for an attack on the nation.

"If you cross our red line, we will destroy you," he said. "We will not leave any move unanswered." He said if Iran decides to respond, "the enemy will not have security anywhere," adding that "our patience has a limit."

Amnesty International said late Monday that at least 143 people have been killed in the protests since Nov. 15, updating an earlier toll. The London-based rights group said it had "clear evidence" that Iranian security forces used firearms against unarmed protesters.

"The rising death toll is an alarming indication of just how ruthless the treatment of unarmed protesters has been by the Iranian authorities and reveals their appalling assault on human life," said Philip Luther, Amnesty's research and advocacy director for the Middle East and North Africa.

Iran has not released a death toll and cut off internet for several days, making it difficult to ascertain the extent and severity of the demonstrations.

At the pro-government rally, which state TV referred to as the "Rise of the people of Tehran against riots," protesters carried signs bearing traditional anti-U.S. slogans.

But speakers also criticized President Hassan Rouhani's administration for the way the fuel price hike was implemented, even as they called for capital punishment for rioters and further restrictions on social media platforms.

Iran has been gripped by a severe economic crisis since the U.S. restored painful sanctions after withdrawing from the 2015 nuclear deal.

In a separate development, Iran's agriculture minister resigned a day before he was to face an impeachment hearing in parliament.

The presidency's website said President Hassan Rouhani accepted the resignation of Mahmoud Hojjati and then appointed him as an assistant in agricultural and food security affairs.

Iran's parliament planned to impeach Hojjati after some of his appointed managers were arrested on corruption charges. Hojjati himself has not been accused of corruption.