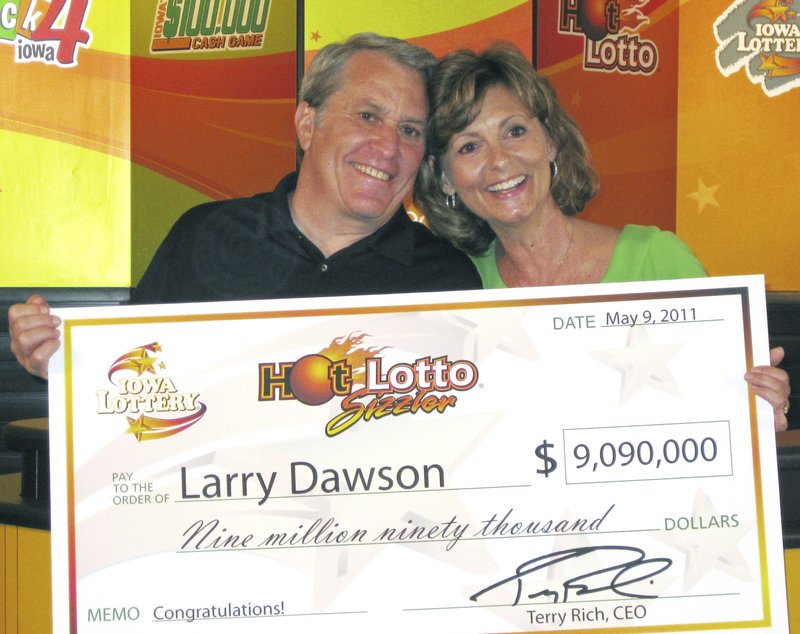 The Associated Press LOTTERY WINNER: This May 9, 2011 photo provided by the Iowa Lottery shows Larry Dawson and his wife, Kathy, claiming their $9.09 million Hot Lotto jackpot in Des Moines. A national lottery group rocked by an insider's jackpot-rigging conspiracy has settled a lawsuit brought by the Iowa grandfather who said the $9 million prize he won in 2011 should have been nearly three times as big. The Multi-State Lottery Association and Dawson informed a judge of the settlement this month, cancelling a trial that had been scheduled to begin next week in Des Moines, Iowa.

IOWA CITY, Iowa (AP) -- A national lottery group rocked by an insider's jackpot-rigging conspiracy said Monday it has settled a lawsuit brought by an Iowa grandfather who alleged that a $9 million prize he won in 2011 should have been nearly three times as big.

The Multi-State Lottery Association and Larry Dawson informed a judge of the settlement this month, cancelling a trial that was scheduled to begin next week in Des Moines, Iowa. The terms of the deal are confidential.

"He's relieved that it's over," Dawson's attorney, Nicholas Mauro, said.

Dawson, a financial adviser who lives in Webster City, Iowa, won a $9 million Hot Lotto jackpot in 2011. He happily claimed the $6 million pre-tax cash payout, surrounded by his wife, children and grandchildren.

But years later, he learned that the game's previous $16.5 million jackpot had been rigged by Eddie Tipton, the lottery association's information security director, in a massive fraud.

Dawson, 66, sued in 2016 alleging that the $16.5 million should have carried over to the prize he won under Hot Lotto's rules. His lawsuit sought $10 million -- the size of the lump sum cash option -- plus interest.

The settlement is the second in recent months to resolve legal claims alleging that the association's lax security allowed Tipton's fraud to occur and cheated players. The association agreed to pay $4.3 million to settle a class-action lawsuit, giving refunds to players who purchased tickets for tainted drawings between 2005 and 2013.

A statement issued by the association said the group and its insurance carrier "decided to settle the case to avoid additional litigation expenses." The group said the agreement "contains a confidentiality clause that prevents either party from discussing the terms or releasing it."

Settlement agreements involving government bodies are public records under Iowa law. But it's not clear how that law would apply to the association, a nonprofit that is owned by 38 state and territorial lotteries.

In resolving his case, Dawson dismissed claims against the Iowa Lottery. That agency and the Iowa attorney general's office said they don't have copies of the settlement.

"The settlement between the Multi-State Lottery Association and Mr. Dawson closes a chapter in lottery history that tested" the integrity of lottery games, he said. Iowa officials "passed this test" by investigating, uncovering and prosecuting Tipton's fraud, Strawn said.

Tipton secretly installed code in software used by lotteries that allowed him to predict winning number combinations on certain days of the year. For years, he worked with his brother and other associates to purchase winning tickets and claim prizes around the country. A judge sentenced him in 2017 to up to 25 years in prison.

Tipton's downfall began after he purchased a winning ticket for the $16.5 million Hot Lotto jackpot at a gas station near the association's office in December 2010. Stunned colleagues identified him as the buyer after investigators released surveillance footage of the purchase years later. Tipton passed the ticket to associates but the Iowa Lottery refused to pay after lawyers for a trust declined to reveal who bought the winning ticket.

The money ultimately went back to the 16 states that operated the Hot Lotto as an "unclaimed prize." Dawson's lawsuit alleged that the jackpot should have carried forward and that states shouldn't receive a windfall for failing to operate a fair and secure game.

Iowa Lottery's previous CEO, Terry Rich, accused Dawson of trying to "rewrite history," saying it was impossible to know what would have happened if the prize had carried over.

Dawson -- nicknamed "Lucky Larry" for his golf game -- said he bought $19 in tickets for every bi-weekly draw so he could cover all 19 "Hot Ball" options, after reading a book claiming to have the secrets to winning lotteries.