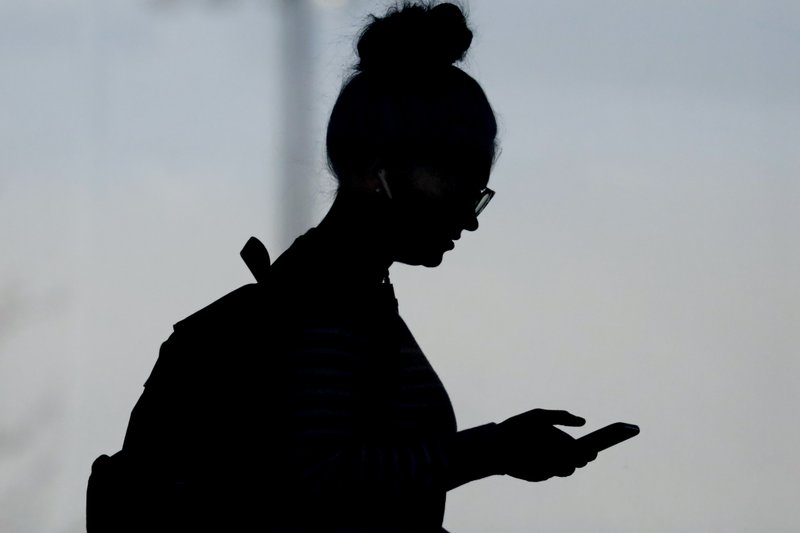 The Associated Press CHECKING IN: In this Nov. 14 file photo, a woman checks her phone in Orem, Utah. A new poll from The Associated Press-NORC Center for Public Affairs Research and USAFacts finds that Americans are getting information about government from social media at least as much as from traditional news sources, but few trust what they see and read.

PROVIDENCE, Rhode Island -- It's one of America's leading sources for news about the government, yet also among the least trusted. Social media, a new poll finds, is America's political news paradox.

Julie Ferguson, an occupational therapist in central Washington state, remembers getting TV news from just a handful of networks. "I grew up watching Walter Cronkite," she said. Today, she sees more political news on social media than anywhere else. She doesn't trust it, but worries many others do. "The information they're getting, who knows where it's coming from?"

The poll also found that Americans are significantly more likely to say they get information from social media repeatedly throughout the day than to say the same about any other news source.

Yet the survey found only 11% of Americans say they trust information about government they see on social media a great deal or quite a bit. Nearly two-thirds said they have little to no trust in government news they find there. Of all the potential places to find news about the government included in the survey, social media was the least trusted.

"There's definitely a bias to everything (on social media)," said Gordon Schackelford, 70, of Fairfield, Iowa. He said he became "cynical" about what he sees on social media after learning Russia used those online platforms to publish false, misleading and divisive content in an effort to tamper with the 2016 U.S. election.

Schackelford said he has grown weary of partisan posts on social media sites such as Facebook and Twitter, finding that on social media, it can feel like everyone from politicians and family members to journalists are pushing certain narratives or talking points -- no matter the facts.

Yet, he admitted, he still checks social media on a daily basis.

While awareness about misinformation on social media has increased in recent years, many people are still confused about how they can get reliable news, said Stephanie Edgerly, an associate professor at Northwestern University who researches changing media landscapes.

"It's really dangerous to make people aware, concerned and afraid, but not pair that with strategies to engage," Edgerly said. "What we're observing right now is that people got the message that fake news, disinformation exists online. What we haven't done a really good job of getting the message out there is where they can go for information they can trust."

Americans are somewhat more trusting of the information about government that they get from more traditional news sources, such as newspapers or local TV news. Distrust is still widespread, however, no matter the source.

According to the survey, the most trusted source for information about government is public TV and radio, with 31% saying they have a great deal or quite a bit of trust in outlets such as PBS or NPR.

Frank Junker said he distrusts the news he reads on social media because platforms are designed to encourage clicks, not accuracy or insight. While the 33-year-old from Cincinnati uses social media on a daily basis as a way to highlight his work as an artist, he doesn't consider it a good source of information.

"These are algorithms deciding what news stories to push at me," he said. "You don't know what's being driven by advertising. They want you to click, so they'll come up with headlines to do it."

Junker and other survey respondents interviewed by AP said the amount of misinformation and spin they have encountered online has forced them to develop their own techniques for determining the accuracy of what they read. A varied media diet, tolerance of differing opinions and a healthy dose of skepticism is essential, they said.

Ferguson, the occupational therapist, said too many Americans are only exposed to information about government that reinforces their preexisting beliefs, regardless of whether those beliefs have a basis in reality.

"They live in their own tiny world," she said. "It's dangerous."