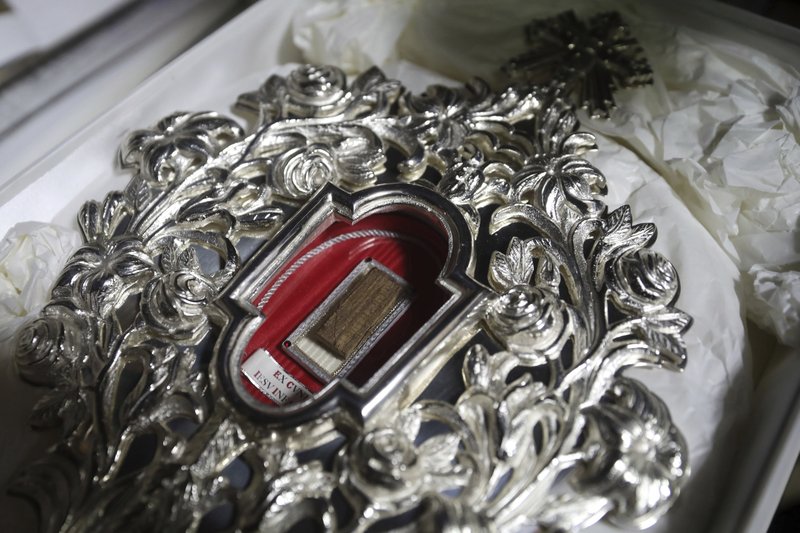 JERUSALEM -- Christians on Friday celebrated the return to the Holy Land of a tiny wooden relic they believe was part of Jesus' manger nearly 1,400 years after it was sent to Rome as a gift to the pope.

The thumb-sized relic was unveiled to worshippers Friday at the Notre Dame church in Jerusalem for a day of celebrations and prayer.

Today, it will be sent to its permanent home at the Franciscan Church of St. Catherine, next to the Church of the Nativity in Bethlehem, the West Bank holy site where tradition says Jesus was born. Its arrival will coincide with Advent, a four-week period leading up to Christmas.

Christian tradition holds that Joseph and Mary traveled to Bethlehem to register for the Roman census and found no room at the inn, forcing her to give birth to Jesus in a manger where animals were held. The idea that the son of God was born in humble surroundings is central to Christian theology.

A wooden structure that Christians believe was part of the manger was sent by St. Sophronius, the patriarch of Jerusalem, to Pope Theodore I in the 640s, around the time of the Muslim conquest of the Holy Land.

Yisca Harani, an Israeli expert on Christianity, said many relics were relocated from the Holy Land in the Middle Ages as Rome and other cities were establishing themselves as centers of Christian life and pilgrimage. A relic from the manger would have been particularly useful for dispelling heresies holding that Jesus was more of a spiritual than a physical being.

She said the return of such an important item "is definitely a statement saying the Vatican and the Holy Land are together."

Few relics have been submitted to scientific testing. One of the most famous, the Shroud of Turin, the cloth purportedly used to wrap Jesus for burial after he was crucified, was tested by forensics scientists and dated to the 13th or 14th century.

Christians cite oral history and tradition for proof of the authenticity of the relics, including the wooden manger. They say the earliest Christian communities preserved and venerated objects connected to Jesus, handing them down through the generations like family heirlooms.

"When there is a very old and continuous tradition we can say that the relic is true," said Brother Francesco Patton, the custodian of the Franciscan order in the Holy Land.

"Of course, we don't have a picture of the manger when Jesus was born," he added.

He said the wooden manger was given to Pope Theodore I as a gift because the pope was himself from the Holy Land, and would have strengthened ties with the church. He said the entire wooden structure is too fragile to move, so Pope Francis decided to return a small part of it instead.

Harani, the historian, said that for Christians the authenticity of the objects was less important than the message they convey, that Jesus was a living God who was born and existed in a certain time and place.

"When you have a physical relic, you show that Jesus was in flesh," she said.

On Friday, around 50 worshippers attended a special Mass with the relic on display. The tiny piece of wood was preserved in an ornate silver cross displayed next to the altar. After Mass, worshippers lined up to venerate the relic, with some kneeling and others kissing the display case.

"My heart is beating. I'm really crying from joy for this event and thankful also for the pope, for this kindness that he brought to Bethlehem," said Louisa Fleckenstein, a guide for pilgrims visiting the Holy Land. "Today is like Christmas."

Her husband, Karl Heinz Fleckenstein, a German writer and theologian, said having the relic back in the Holy Land gives Christians "courage" to remain in the cradle of their faith, where decades of war, conflict and emigration have decimated Christian communities.

"It gives us the security that Jesus is not only a story," he said. "Jesus was born in Bethlehem, the son of God became man in a land, in a certain period, in a certain people. So this is proof for us."