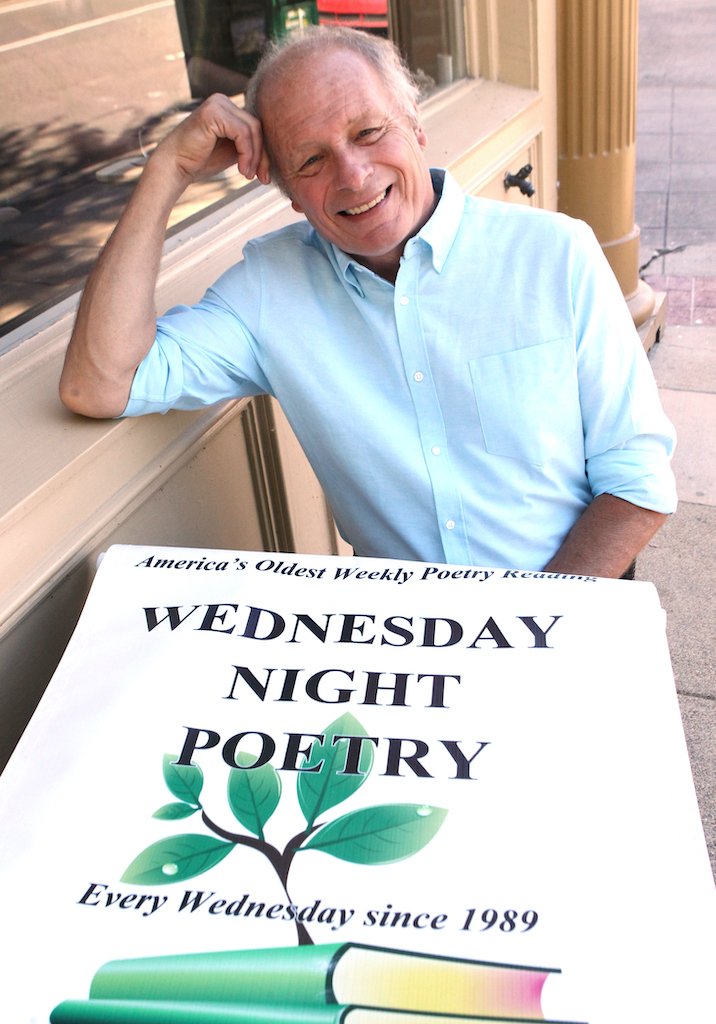 Bud Kenny, sitting outside Kollective Coffee+Tea in 2016. - File photo by The Sentinel-Record

Author, adventurer and downtown businessman Bud Kenny died Wednesday on the night of the 1,601st consecutive poetry reading he founded in 1989. He was 71.

Kenny's colleague and current Wednesday Night Poetry host Kai Coggin said in an email Kenny was the finder, keeper, host and "disarming tall giant of heart who welcomed everyone young and old to the mic" of WNP.

She said he started Wednesday Night Poetry on Feb. 1, 1989, after a suggestion by the artist Benini, and with the support of Dr. Paul Tucker and his wife, Suzanne Tucker.

"The first WNP had over 200 people in attendance and lasted until after midnight. The rest is history," Coggin said. "We have not missed a single week in 1,601 consecutive Wednesdays. Kollective Coffee+Tea has been our home for the last few years, and we love it there."

Kollective Coffee+Tea co-owner Kevin Rogers and his wife, Agnes, were the previous owners of Maxine's, one of the many places the weekly event was hosted.

"I can personally attest, when we were hosting it at Maxine's we were hit with a big ice storm in town that knocked out power, and with health regulations we weren't allowed to have anyone in the building with no power," Rogers said. "They met out on the sidewalk in the ice and snow to keep the streak alive."

Rogers said he first met Kenny in 1989 while attending WNP, and the lives it has touched are countless.

"The fact that people have a safe place to go bare their souls is as good a therapy as I can imagine having," he said.

Rogers described Kenny as a character one would hear about in a Bob Dylan song.

"He has walked from Pennsylvania to Oregon, and from there to San Francisco and back to Hot Springs with a mule and a cart," he said. "He wrote a book ("Footloose in America: Dixie to New England") about it. He did that walk, over 8,000 miles in three and a half years."

Coggin said Kenny was the kind of man who could talk to anyone and had rich stories and experiences, always getting to the "heart" of a person.

"I don't know where he was born, for he seemed to be from everywhere, from this entire country he walked across step by step," she said. "The last few years, he has been mostly a man in love. He was so in love with Gin, a beautiful woman with a wide heart ... He called her his princess."

Coggin said Kenny wrote countless love poems for Gin, and "read them with pride at the mic."

"Gin was with him every single day, traveling back and forth from Hot Springs to Little Rock for the eight arduous weeks (he was) in the cardiovascular intensive care unit after his open heart surgery and the complications that followed, until he took his final breath on his own terms," Coggin said. "She was his loving sentinel, his gentle angel, his dearest and most precious love."

She said she met Kenny five years ago when she first started attending WNP.

"We became fast friends, colleagues of the written word, with a mutual respect and admiration for each other," she said. "Over the years, we became closer and closer. He became like a father to me, a mentor, a most trusted friend. I called him my 'poetry dad,' then it became just 'dad,' and he lovingly called me his daughter."

Coggin said when Kenny asked her to take over as host of WNP, he got down on one knee, asking if she would do him the honor of taking the poetry community forward, keeping its legacy alive for the next generation.

"In February of this year at the 30th anniversary, I became the new host, and he had a big net under me for weeks making sure my wings were steady," she said. "He wanted to be able to just come and sit in the back and listen. I know now, that he will always be there, sitting in the back every Wednesday, listening. I will keep this poetry legacy going for Bud, for all of us."