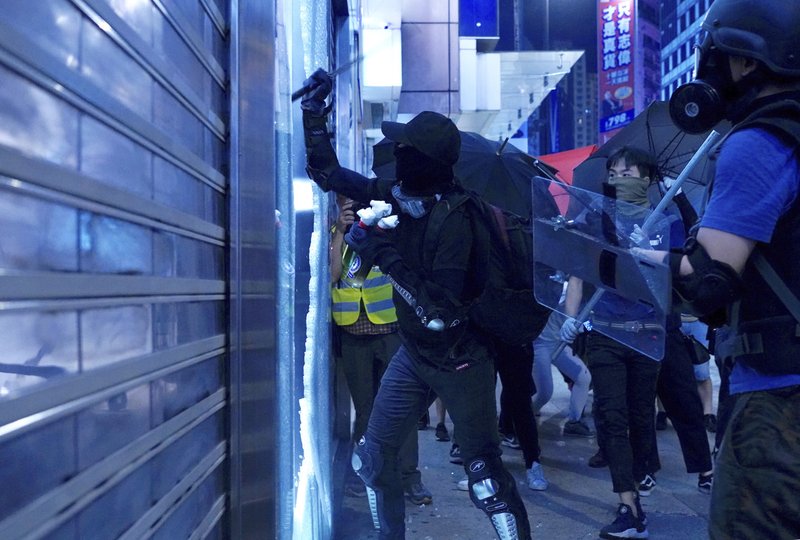 A protester damages a glass window on the streets of Hong Kong on Friday, Oct. 4, 2019. Masked protesters streamed into Hong Kong streets Friday after the city's embattled leader invoked rarely used emergency powers to ban masks at rallies in a hardening of the government's stance after four months of anti-government demonstrations. - Photo by Vincent Yu of The Associated Press

Challenging the ban, which went into effect Saturday, thousands of protesters crammed streets in the central business district and other areas Friday night, shouting "Hong Kong people, resist!" Two activists filed legal challenges on grounds the ban would instill fear and curtail freedom of assembly, but a court denied their request for an injunction.

Pockets of angry protesters attacked Chinese bank outlets and shops, vandalized subway stations and set street fires across the city, prompting police to respond with tear gas in many areas. An officer fired a single shot from his gun in self-defense after he was attacked by protesters in the northern Yuen Long district, said police spokeswoman Yolanda Yu. She said a male was wounded, but that police didn't know exactly how he got shot.

A police official, who requested anonymity because he wasn't authorized to speak to the news media, said the male is 14. A Hospital Authority spokesman said the teen was in serious but not critical condition.

The teen became the second victim of gunfire since pro-democracy protests began in June and just three days after an 18-year-old protester was shot by a riot police officer at close range.

Hong Kong Chief Executive Carrie Lam told a news conference Friday that the mask ban, imposed under a colonial-era Emergency Ordinance that was last used over half a century ago, would be "an effective deterrent to radical behavior."

"We must save Hong Kong -- the present Hong Kong and the future Hong Kong," she said. "We must stop the violence. ... We can't just leave the situation to get worse and worse."

Lam said she would seek the legislature's backing for the ban later. She insisted the semiautonomous Chinese territory was not in a state of emergency but wouldn't rule out a further toughening of measures if violence continued. She dismissed suggestions that she should resign, saying it would be unhelpful at a time when Hong Kong is in "a very critical state of public danger."

Face masks have become a hallmark of protesters in Hong Kong, even at peaceful marches, amid fears of retribution at work or of being denied access to schooling, public housing and other government-funded services. Some young protesters also wear full gas masks and goggles to protect against tear gas. Many are concerned their identities could be shared with the massive state-security apparatus that helps keep the Communist Party in power in mainland China, where high-tech surveillance including facial recognition technology is ubiquitous.

Lam's ban applies to all public gatherings, both unauthorized and those approved by police. It makes the wearing of any face coverings, including face paint, punishable by one year in jail. A six-month jail term could be imposed on people who refuse a police officer's order to remove a face covering for identification. Masks will be permitted when wearers can prove they need them for work, health or religious reasons.

Thousands of masked protesters marched before Lam spoke. The rallies spread to many areas as protesters vowed not to be cowed. Many blocked traffic, smashed up shops and public properties, and set fires at streets and subway exits before the protests ended after midnight.

"Will they arrest 100,000 people on the street?" said a protester who gave his surname as Lui. "The government is trying to intimidate us, but at this moment, I don't think the people will be scared."

A protester who identified himself as Ernest Ho noted that Hong Kong police wear masks "and they don't show their pass and their number."

"So, I will still keep my mask on everywhere," Ho said.

Analysts said the use of the Emergency Ordinance set a dangerous precedent. The law, a relic of British rule enacted in 1922 to quell a seamen's strike and last used to crush riots in 1967, gives broad powers to the city's chief executive to implement regulations in an emergency.

"If the anti-mask legislation proves to be ineffective, it could lead the way to more draconian measures such as a curfew and other infringement of civil liberties," said Willy Lam, adjunct professor at the Chinese University and no relation to Carrie Lam.

British Foreign Secretary Dominic Raab said Lam's government should avoid aggravating tensions and that "political dialogue is the only way" out. Malaysian Prime Minister Mahathir Mohamad, the world's oldest leader, said Lam should resign and predicted Beijing would send in its military to end the crisis.

Carrie Lam bristled at a suggestion that the mask ban nudged Hong Kong closer to authoritarian rule. She insisted she was not acting under orders from Beijing, which she visited this week when Communist Party leaders celebrated 70 years in power on Tuesday. But Yang Guang, a Chinese spokesman for Hong Kong affairs, expressed support late Friday, saying it was time for stern measures to end the conflict.

The ban came after widespread violence Tuesday across Hong Kong that marred China's National Day, when a police officer shot a protester at close range, escalating the violence since protests started over a now-shelved extradition bill. The wounded teenager was charged with attacking police and rioting.

The government last month withdrew the extradition bill, which would have allowed suspects to be sent to mainland China for trial, but the movement has snowballed into an anti-China campaign amid anger over what many view as Beijing's interference in Hong Kong's autonomy. Protesters have widened their demands to include direct elections of the city's leader and police accountability.

More than 2,100 people have been detained so far, including 204 charged with rioting, which carries a penalty of up to a decade in prison.