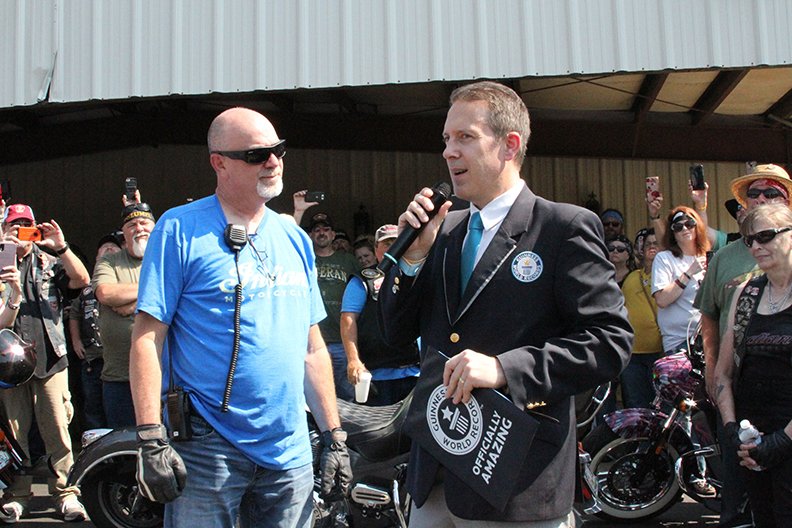 Philip Robertson, an adjudicator with Guinness World Records, informs parade organizer Rob Gregory that a group of Indian motorcycle owners from across the country had broken a world record Saturday in Hot Springs. - Photo by Tanner Newton of The Sentinel-Record

It took a couple of attempts, but 651 Indian motorcycle enthusiasts from around the country were successful at setting a new Guinness World Record in Hot Springs on Saturday for the world's largest Indian motorcycle parade.

The record to beat was 274, which was set in Minnesota in 2017. With close to 700 people pre-registering for the attempt, event organizer Rob Gregory told the assembled crowd of motorcyclists that they had the "numbers to crush" the previous record. However, numbers weren't enough to set the record.

As this record is for a parade, there were rules that had to be met. Each of the motorcycles had to keep formation, a 10 mph speed and a distance of no more than three vehicle lengths behind the motorcycle in front of them. The parade would be allowed three attempts.

The first attempt did not go well. Philip Robertson, Guinness' adjudicator who attended the attempt, said that none of these requirements were met in the first attempt. "We had to disqualify the attempt (after) around 120 riders had passed," Robertson said.

In that attempt, the two-motorcycle formation was not kept, and speeds exceeded the 10 mph limit. Gaps were also seen between motorcycles that Robertson said were around seven vehicle lengths.

"It was more of a ride than a parade," Robertson said. 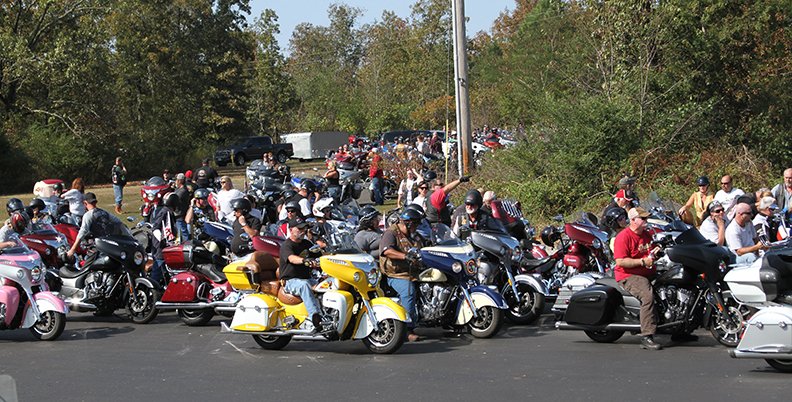 Over 600 Indian motorcycle owners from across the country line up Saturday in Hot Springs in an attempt to break the world record for a parade of Indian motorcycles. - Photo by Tanner Newton of The Sentinel-Record

The second attempt was successful. "My first words would be prayers answered," Gregory said about getting the Guinness World Record. On the first attempt, Gregory said, "I knew we had two more attempts, and practice makes perfect."

Gregory said that he had a blast during the second attempt. He also said that he wanted to thank all the people who attended the event, noting that people drove from "all over the country to be here." A map at the event, which started at the Barrett Center, showed participants came from 34 states as well as the Czech Republic and Iraq.

While not everyone stayed for the second attempt, both Robertson and Gregory said that they were proud that the majority stayed. "Seeing everyone work together" as a team, Robertson said, was "real special."

"Proud to be a part of it," Robertson said.

Other people in attendance were also pleased with the results. Mike Crowley drove 450 miles from Sugarland, Texas, to participate. He said the reason he wanted to be a part of the event is because he thinks that Gregory is "the best dealer I've ever experienced."

When Indian motorcycles returned to production, Crowley said that there were no dealers in Texas, so he had to visit Gregory Polaris in Jacksonville to get one. He was impressed with what he saw. "Here to support (Gregory); he has an event, I'm coming," Crowley said. Crowley also said he is thrilled that Gregory was the one to break the record.

Tracey Botts and Lynn Bower both drove in from Ohio to participate. "I think it was terrific," Botts said.

Bower called the event amazing. "Splendid to be part of it," she said. She also called setting a world record both inspiring and humbling. This was not Bower's first time in Hot Springs, as she has previously attended the Indian Get Together, of which the parade was a part of.

"Thank Hot Springs for being such a good town," Bower said. She also said that every restaurant she visited during her multiday stay was delicious.

Another person in attendance was Hot Springs resident and former gubernatorial candidate Jan Morgan. "I think it was really exciting," Morgan said. She also praised the Get Together, as it was a way for the riders from many different states to get to know each other.

Robertson said that the record will be submitted for the 2021 "Guinness Book of World Records." The editing team of the book will then decide if the record will make it into the book.