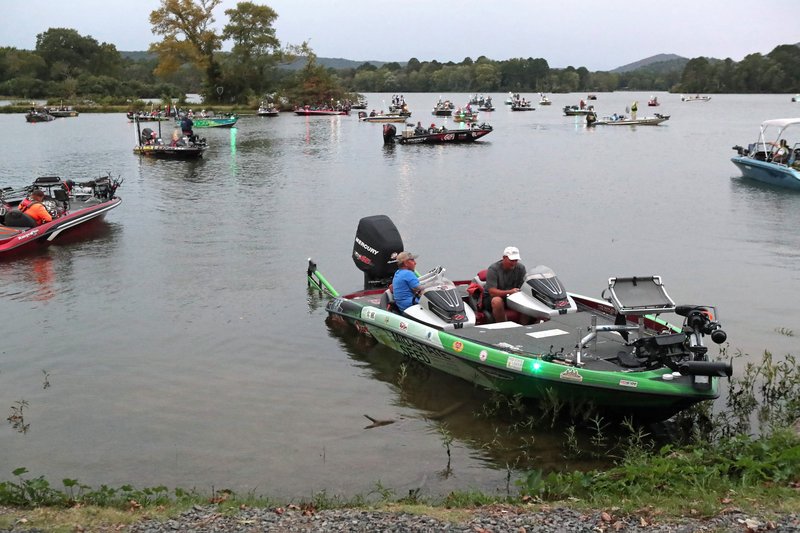 Anglers wait for the start of The Mr. Crappie $100,000 Invitational Crappie Classic on Lake Hamilton on Oct. 4. - Photo by Richard Rasmussen of The Sentinel-Record

The inaugural Mr. Crappie Expo at the Hot Springs Convention Center drew 45,000 to 60,000 people over the weekend, with $100,000 distributed to 25 tournament winners and three boats raffled off to attendees, event coordinator Wally Marshall said Monday.

The big winners at the tournament were Mike and Tony Shepherd, of Tennessee, who were awarded $40,000.

Marshall said the turnout was more than he expected, and the convention center was fully packed on Saturday.

The "World's Largest Crappie Fry" was held Saturday with the help of anglers in the crappie community.

He commended the Arkansas State Police for circling the convention center in their helicopter before landing in the parking lot and leading everyone into the fish fry.

"We had Mayor Pat McCabe and Gary Troutman from the chamber come and speak to everyone, and big hats-off to Anne Marie Doramus, commissioner at the Arkansas Game and Fish, she gave a big speech also," he said.

John Godwin and Mountain Man from "Duck Dynasty" even made an unexpected appearance at the expo, he said.

"We had Mary Heather Hickman on Friday, she had a big crowd. We weren't expecting as many people on Friday, but it was over the top," Marshall said. "We gave away a Lowe boat on Friday, we gave away an Xpress boat on Saturday and Sunday a person won the Ranger RT178c, fully loaded."

Marshall said the expo was a family event.

"There were so many families there, everyone was at the fish fry, there was Motown music playing and it was popping all day long during the show from 9-6 p.m," he said. "We always had music on, so everyone was upbeat and smiling."

"Sunday we had Jason D from Memphis. ... He put on a show and everyone I looked at had a smile on their face; it was so entertaining," Marshall said. "When you can stand flat-footed and stand up on a piano and play it backwards, or play it with your feet; this guy is entertaining. He plays that piano like no tomorrow."

In addition to the entertainment, he said the expo had 115 vendors selling crappie gear and boats.

Marshall said there is a possibility Mr. Crappie will be back in Hot Springs next year, but they are currently still "in talks" about its next location. He said there were contenders from Mississippi and Louisiana at the event that would like to see the event moved around to other states.

Visit Hot Springs CEO Steve Arrison said Monday the Mr. Crappie Expo had a "fantastic" turnout for it being a first-time event and was "well-embraced" by the community.

"It would be something to look at in the future; It was a tremendous success," Arrison said. "It proves once again Hot Springs loves fishing from the amount of people that came out."