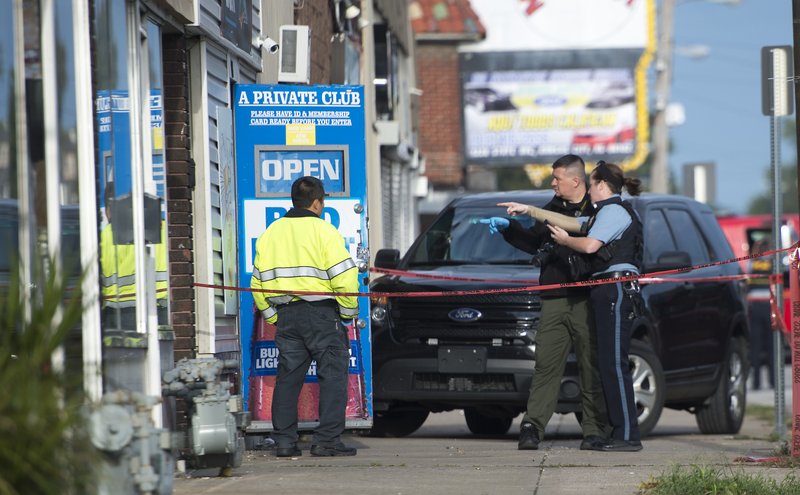 The Associated Press BAR SHOOTING: Kansas City, Kansas, police are on the scene after two gunmen entered a Kansas City, Kansas, bar early Sunday, and shot multiple people, killing several of them. The shooting occurred shortly after 1:30 a.m. at the bar near 10th Street and Central Avenue.

KANSAS CITY, Kan. -- One of two suspects in the fatal shooting of four people in a Kansas bar caused a disturbance two hours earlier that brought officers to the scene, but they couldn't find him in the area, the interim police chief said Monday.

The Kansas City Star reported that Alatorre was recently released from jail in Missouri, where he faced pending charges for tampering with a motor vehicle, possession of a controlled substance and resisting or interfering with arrest, detention or stop. A judge reduced his bail and released him on his own recognizance over the objections of prosecutors.

Police said both men have been charged with four counts of first-degree murder, and bail has been set at $1 million for each. Villaneuva-Morales is considered armed and dangerous.

Surveillance video shows Villanueva-Morales entering Tequila KC, where he got into an argument and was told to leave late Saturday, police said. It wasn't clear whether Alatorre also was in the bar during the argument.

York said officers went to the area late Saturday to investigate the disturbance but couldn't find the suspect. He said officers remained in the area "doing their patrol duties."

"They cleared the call and then two hours later, he returns back," York told reporters during a news conference. "But we had no information that he was going to return back."

Bartender Jose Valdez told The Star that he had refused to serve one of the suspects because the man had previously caused problems at the bar. Valdez said the man threw a cup at him and left, but that he returned later with another man shortly before closing time.

All of those killed were Hispanic, and two were Mexican citizens, that country's foreign relations secretary, Marcelo Ebrard, said Sunday on Twitter. He did not identify the two but said the Mexican government would support their families.

Authorities have said they do not believe the shooting was racially motivated. The shooting happened in a neighborhood with a large Hispanic population.

"The investigation is leading us to believe that it was not random," York said.

Family members told The Kansas City Star that Calderon owned a heating and cooling business for several years and was the devoted father of a 6-year-old son and 4-year-old daughter. They said he went to the bar to watch a boxing match.

"He cared about those babies so much," recalled sister-in-law Celeste Trevino. "Those babies need their dad."

Trevino also said that Meza-Aguirre pushed her to the floor when the gunfire started, and she believes it is why she survived. Meza was a regular at the bar, and it was where he and friends usually watched the Kansas City Royals and Kansas City Chiefs. Friends had plans to catch a game there Sunday, said Toni Maciel, Trevino's cousin.

"He's always going to be a hero in my eyes," Maciel said.

Around 40 people were inside the small bar when gunfire erupted, police spokesman Thomas Tomasic said. The gun shots sent people running for the exits, with the injured leaving trails of blood as they fled. Two of the wounded were treated and released and three others remained hospitalized in stable condition, he said.

Alatorre is jailed again in Missouri after he was arrested without incident at a home that court records listed as his place of residence. He does not yet have an attorney.

Alatorre will have an initial court appearance in the coming days in Kansas, said Wyandotte County District Attorney's Office spokesman Jonathan Carter. Carter said it's too soon to determine whether prosecutors will consider the death penalty in the case.

Villanueva-Morales had a pending third-degree assault charge in Missouri. It stemmed from an incident in August outside a club in which an off-duty sheriff's deputy reported that left both men bloodied.

Alatorre had past convictions for fleeing or attempting to elude law enforcement in Kansas and for driving while intoxicated in Missouri, in addition to the pending charges in Missouri.

In 2017, an court order barred Alatorre from abusing, stalking and possessing a firearm after a woman who had a child with him reported physical abuse and threats. It expired in February 2018.