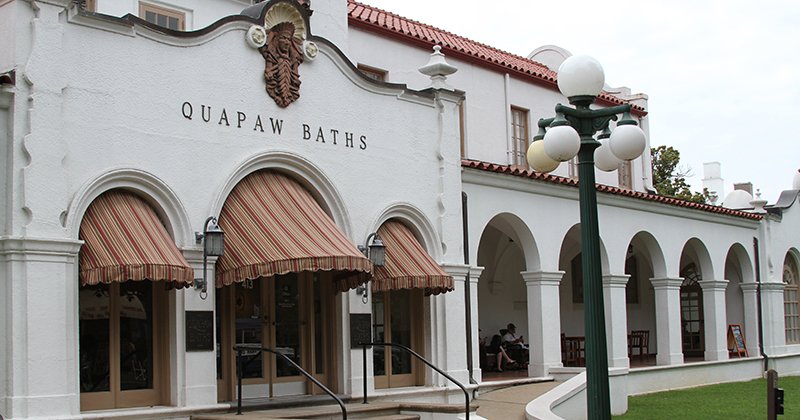 A shower area at the Quapaw Baths & Spa will remain closed until the bath house has developed an overall water management plan and identified and installed the appropriate disinfectant on its tempered natural hot spring waterlines, a Quapaw spokesman said Tuesday.

The Arkansas Department of Health issued a news release on Friday stating it has received environmental test results showing the presence of Legionella bacteria in one untreated water source, which is separate from the drinking water system, within the Quapaw Baths & Spa in Hot Springs. Legionella bacteria can cause a serious type of pneumonia known as Legionnaires' disease.

The Quapaw spokesman said all other thermal baths and pools are treated and "don't pose a risk."

The spokesman also said that, "out of an abundance of caution," the spa has notified all guests who may have been in this shower area and has also posted a sign in the lobby to notify all clients at the spa.

Tricia Horn, management and program analyst for Hot Springs National Park, said additional testing is being conducted around the park to ensure the Legionella bacteria is not in the water, but for now the spring water is considered safe and there is no public health issue.

Horn said the test results are expected in two weeks, but for now no information has changed from the original news release from the Arkansas Department of Health.

The Quapaw closed for several days in August after preliminary results from testing indicated the presence of the bacteria. The bath house reopened after final test results showed the preliminary indication had been erroneous.

A follow-up test, however, confirmed the presence of the bacteria in water taken from one of the showers, Jennifer Dillaha, the Health Department's medical director for immunization, told the Arkansas Democrat-Gazette on Friday.

Dillaha told the Arkansas Democrat-Gazette last week that so far three cases of infected Quapaw visitors have been reported, including one person who died.

She told the newspaper the contaminated water came from a hot spring and was then cooled before going to the showers and baths.

The department also tested water from public fountains, and that was found to be safe, she said. The water that comes directly from the hot spring, without being cooled, is too hot for bacteria to survive in, she told the Democrat-Gazette.

"Any building that has a complex water system, like a hotel or a hospital or a cruise ship, is vulnerable to having this organism grow because the waters are warm enough for it to grow but not hot enough to kill it," Dillaha said.

Someone exposed to Legionella bacteria can develop Legionnaires' disease or Pontiac fever.

According to the Centers for Disease Control and Prevention, Legionnaires' disease is very similar to other types of pneumonia, with symptoms that include cough, shortness of breath, fever, muscle aches and headaches.

Symptoms usually begin two to 10 days after being exposed to the bacteria, but it can take longer so people should watch for symptoms for about two weeks after exposure. Anyone who develops pneumonia symptoms should see a doctor right away.

Additionally, Pontiac fever symptoms are primarily fever and muscle aches; it is a milder infection than Legionnaires' disease. Symptoms begin between a few hours to three days after being exposed to the bacteria and usually last less than a week.