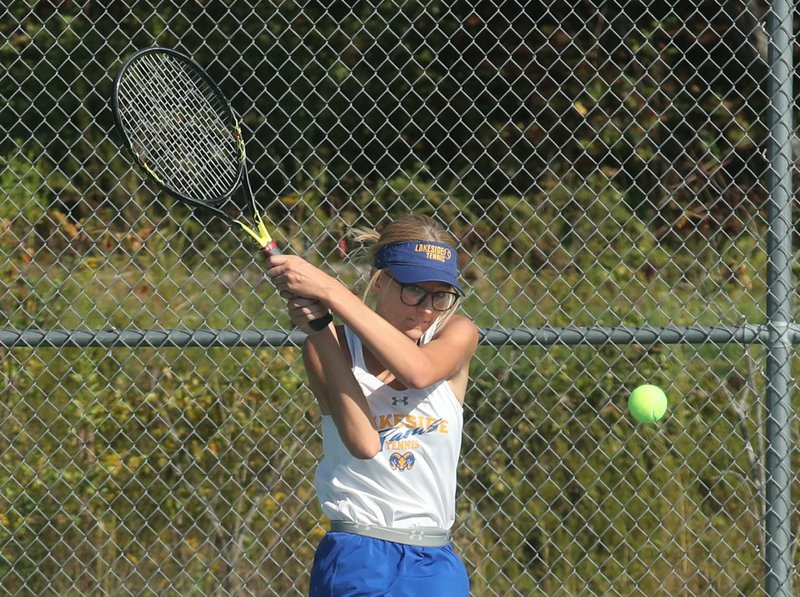 Lakeside junior Haley Fauber returns the ball against El Dorado's Emma Thomas during one of the semifinals at the 5A South conference tournament at Lakeside Wednesday. Fauber won the semifinal matchup before defeating teammate Julia Malone in the final. - Photo by Richard Rasmussen of The Sentinel-Record

Before the start of the finals and the third-place games, everyone knew which team had claimed the 5A South conference title. All one had to do was look at who was playing in the finals.

Lakeside swept all eight semifinals, leaving teammates facing off against each other in the finals of the tournament as players from Hot Springs, Lake Hamilton, El Dorado and Texarkana each played for seeding for next week's Class 5A State Tournament, which will be hosted by Lakeside.

"Today I was not expecting an all-Lakeside final, so it was kind of awesome to see that happen because I didn't think that was gonna happen at all," she said. "And it did. So it was great."

Leading the Rams in the semifinals was freshman Ben Hollis, who faced off against Lake Hamilton freshman Peter Bobnar for a 6-2, 6-0 win. 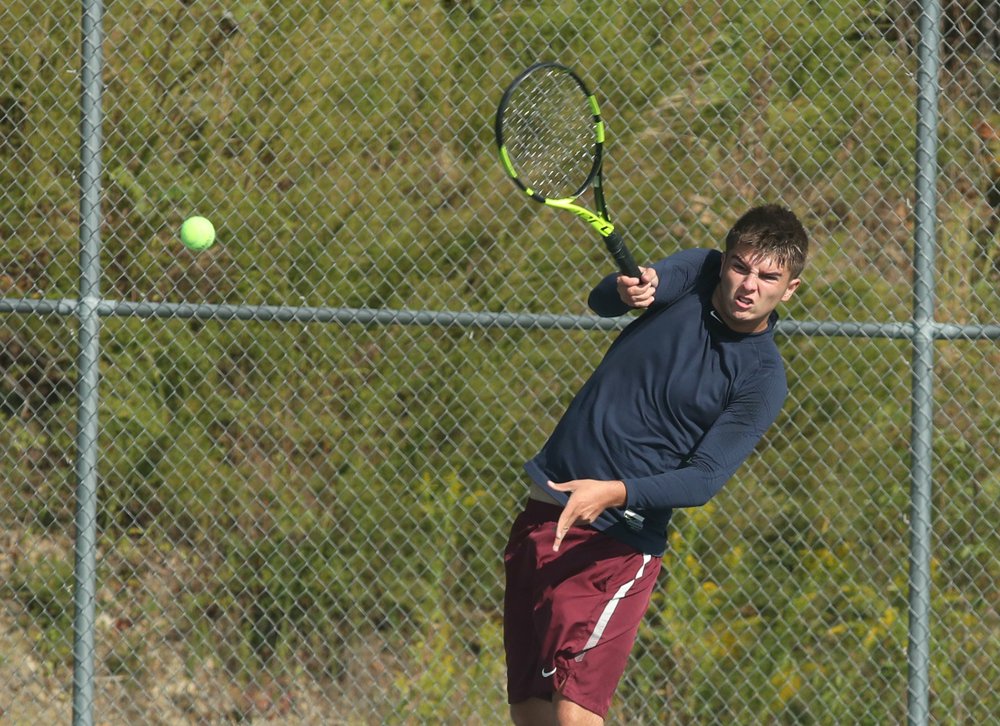 Lake Hamilton freshman Peter Bobnar returns a volley to Lakeside freshman Ben Hollis in a semifinal at the 5A South conference tournament at Lakeside Wednesday. Hollis won the semifinal, and he went on to defeat teammate William Ivy in the final. - Photo by Richard Rasmussen of The Sentinel-Record

Bobnar picked up the first game easily as he did not allow Hollis to score a single point, but Hollis responded by taking four straight games to power out to a 4-1 lead. Hollis served for the next set as the players each traded points before Hollis sent a long shot across to the far end of the court, but it landed just outside for Bobnar to pull within 4-2.

Bobnar struggled to pick up points in the second set as Hollis cruised to a 6-0 win to advance to face classmate William Ivy. In the other boys singles semifinal, Ivy lost his first set to Texarkana's Nate Price and was down 5-2 before winning seven straight games to force a third set, which he won 6-3.

Hollis went on to defeat his teammate in straight sets, 6-0, 6-0, to take the top seed for next week's state tournament, and Price defeated Bobnar, 8-1, to take third.

"I knew that Lakeside is really good, so I was kind of expecting it," Hollis said of facing off against Ivy, who had just 30 minutes of rest between his semifinal and final. "I feel like he was OK because he started a little bit earlier than he had to."

Green was pleased with the way her team played.

"All my kids exceeded my expectations," she said. "The boys had some really tough competition, and they won some matches that maybe they weren't expected to win. They've worked all season, and they've continually gotten better. And they won when it mattered the most, and I couldn't be more proud of them.

"They're all freshmen except for one. And so they made a statement today, and I thought they did extremely well."

Junior Haley Fauber had a strong showing in her semifinal against El Dorado's Emma Thomas, struggling somewhat in the second set as she won 6-0, 6-4. Teammate Julia Malone took on Lake Hamilton's Jovana Cetnik, taking a win to face off against Fauber in the finals, 6-2, 6-1.

Fauber and Malone faced off in a tournament for the second time this season, but this time the junior Fauber held on for a win, although she had to earn it. The first set required the pair to go to a tie-break, which Fauber won, 10-8, before claiming a 6-3 win in the second set.

"I think it was a pretty good match," Fauber said after defeating Malone in the final. "Julia's a really good opponent, so us playing together is always a good game.

"We played once in the Lakeside tournament, and she beat me. Like she killed me, but playing in practice, it's usually pretty close."

Thomas finished in third place after an 8-2 win over Cetnik.

Green was also impressed with how well the girls performed in the two-day conference tournament.

"All my girls the same, we've got some really good tennis players," she said. "I'm losing several seniors this year, so it's the opposite of my boys. But I'm super proud of the way they competed and hope that they continue and bring it to state and compete at the same level."

The boys doubles matches were as exciting as the singles with Lakeside's Greyson Cornelison and Walker Wood downing Texarkana's Cornelius and Ivey, 6-4, 6-0. Brooks Bell and Griffin Gulley, also of Lakeside, ended up defeating the other Texarkana doubles team of McCoy and Floyd, 6-3, 7-6 (7).

Bell and Gulley could not get out of their own way early in the second set as Cornelison and Wood powered to a 3-0 lead. Bell and Gulley turned things around in the next two games with Gulley hitting a long volley across the court from the net to make it 3-1 before a double-fault by Cornelison ended the next game as Bell and Gulley pulled within one.

A series of mistakes left Bell and Gulley down two games before a few quick dump shots over the net by each and a volley by Cornelison into the net made it a 4-3 set. Unfortunately for Bell and Gulley, Cornelison and Wood took advantage of a few errors by their teammates to win the next two games for the 6-3 win.

"I think we played pretty good and that I could have played a lot better than I did," Cornelison said after the match. "I got upset at one point, but then calmed back down."

Wood said that he anticipated a close match against his teammates.

Cornelius and Ivey defeated McCoy and Floyd in the third-place match, 8-4.

Blount and the younger Cowen dominated the opening set to take a 6-3 win, but Calhoun and the elder Cowen sister powered to a 6-3 win in the second to force a deciding third set. The two pairings battled in long rallies before Elizabeth Cowen and Blount took the 6-4 win.

Both Blount and the younger Cowen were pleased with their performance in the match.

"I think we just work really well as a team, and we just pump each other up the whole time," Blount said, agreeing with her partner's comment that their attitudes kept them in the match. "So we just do great together.

"We didn't expect to win the final because, I mean, we played some amazing girls in the final. So it was an honor just to play against them and be part of that. So it was great."

Elizabeth said that taking down her sister was "nice."

"Because I'm the younger one," she said with a laugh. "But also, she put up a very good fight. So I'm proud of her."

Green was impressed to see Elizabeth Cowen and Blount win as they have only been playing together since the middle of the season.

Pace and Guevara defeated Bonsall and Carroll in the third-place match, 8-3.

The Class 5A State Tennis Tournament will be held on Oct. 14-15 with the boys matches played at Hot Springs Country Club while the girls will face off at Lakeside's tennis courts.