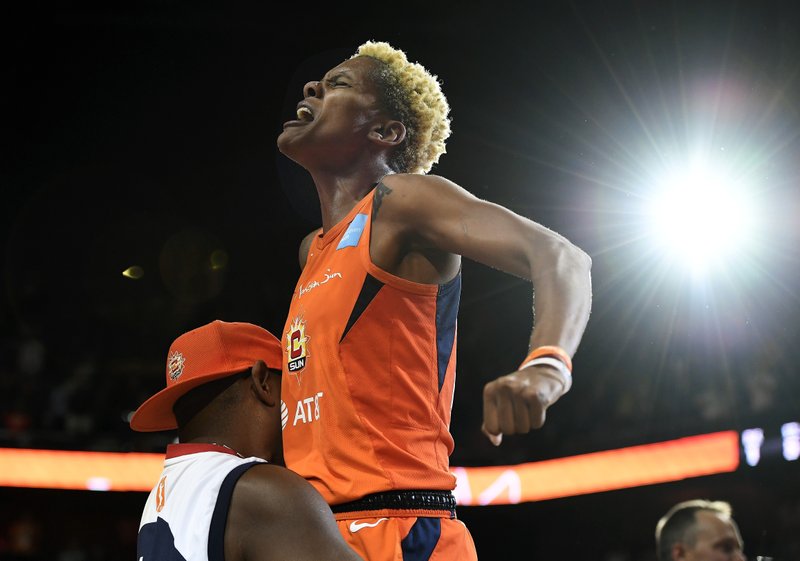 Connecticut Sun's Courtney Williams gets a lift from her father Don Williams after the Sun defeated the Washington Mystics Tuesday in Game 4 of the WNBA Finals in Uncasville, Conn. Photo by Jessica Hill of The Associated Press

UNCASVILLE, Conn. -- The WNBA will crown a first-time champion Thursday night when the Connecticut Sun and Washington Mystics play the decisive Game 5 of the Finals.

It's a series that has had its share of drama. There is an injured superstar playing in pain, a head coach facing the program he led for a decade and team of visitors fueled by what they consider the disrespect of being called "role players."

"We're having the time of our life right now," Connecticut coach Curt Miller said after a thrilling 90-86 win on Tuesday night to send the series back to Washington. "Nothing better. You dream as a little kid being in a deciding final game -- a Game 7, a Game 5 of a series to win a world championship. If you grew up a basketball fan, these are the moments that you dreamed of."

For Miller's Sun, Tuesday almost became a nightmare. Connecticut jumped out to a 32-17 lead after one quarter and led by 16 points at the half. But Washington turned things around with a 28-12 third quarter and led in the fourth quarter, before failing to score over the final two minutes.

"It's been hard in this series," Washington coach Mike Thibault said. "Whoever digs themselves a hole, every team has come back in this series, both teams have come back. But it's hard when you're looking at the deficit we were looking at. I think it was 18 at one point, and the fact that we were ahead says a lot of good things, but then our execution once we got the lead was not great."

The team that has led after one quarter has won all four games. Sun guard Courtney Williams said both teams will be aware of that on Thursday and she expects things to quickly get physical.

The Sun have been fueled in the playoffs by what they consider the disrespect of being called "role players". Connecticut had five players score at least 15 points on Tuesday.

That is typical of the Sun's balanced approach that had fans wearing T-shirts which read "Role Players Did That," a reference to a national TV analysis, which the Sun took as a sign of disrespect.

Washington does have a superstar, but has relied on other players in the Finals, because Elena Delle Donne has been playing with a herniated disk in her back.

The 6-foot-5 forward, who averaged 21.4 points and 7.6 rebounds in the Mystics' first five playoff games, left her team's Game 2 loss early in the first quarter without scoring a point. She put up 13 points in a Game 3 win and 11 in Tuesday's loss, sacrificing her post-up game staying mostly on the perimeter to space out the Sun defense.

"It felt a little better today, so hopefully Thursday it will be even better," she said.

Washington is playing in its second consecutive Finals after being swept by Seattle a year ago. Connecticut hasn't been to the championship series since going back-to-back Finals in 2004 and 2005 under Mike Thibault, who is now the Mystics coach. The league's all-time wins leader has downplayed the significance of facing his former team as most of the people who were there during his tenure in Connecticut are long gone.

The teams have each won a game on the other's court during this series. It will be the third time a Finals has gone to a fifth game since the league switched formats in 2016 to seed the teams 1-8 without regard to conference.

"I think this has been quite the series, and people better be tuning in because this is some great basketball and some really good teams," Delle Donne said. "From that sense, it's great for this league."

Print Headline: WNBA Finals comes down to a decisive Game 5