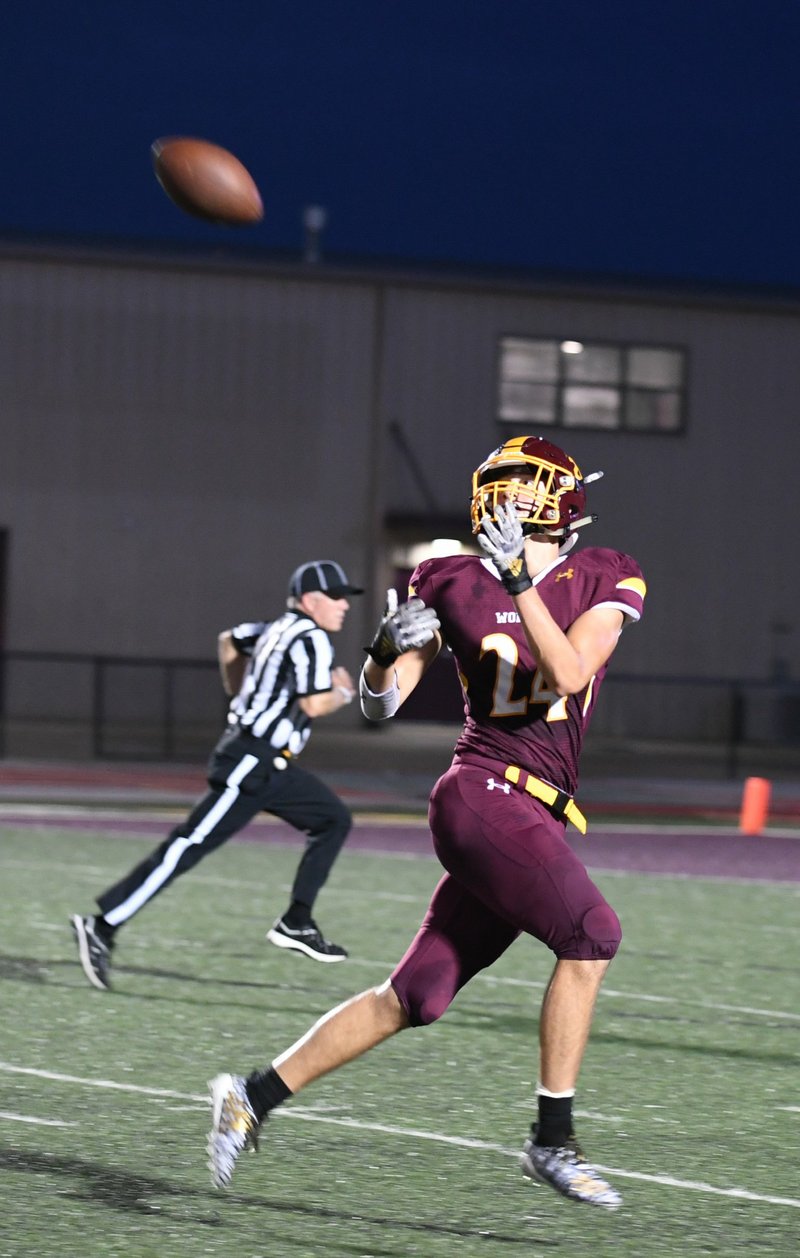 Lake Hamilton junior receiver Destin Rhodes (24) reaches to catch a pass from junior quarterback Layne Warrick during a Sept. 20 game against Hot Springs. The Wolves host Russellville on Friday. - Photo by Grace Brown of The Sentinel-Record

After outscoring its opponents 242-94 in the first five games of the season, Lake Hamilton looks to extend its winning record as the Wolves take on the visiting Russellville Cyclones Friday night at Bank OZK Field.

While the Wolves (5-0, 2-0 6A-West) continue to demonstrate overall improvement on the offensive line, Lake Hamilton head coach Tommy Gilleran is confident that his team's progress will continue to fuel the players' ability to run the ball and score.

After making some changes to the Wolves' defensive strategy, Gilleran and his coaching personnel will continue to encourage the unit to cover well while trying to shut down the aerial game of the Cyclones (1-4, 0-2 6A West).

"Defensively, we feel like we're better up front -- our front seven is," said Gilleran. "We match up well with them on that. We've just got our back end to cover well; we made some changes we feel like are going to help us become better."

The Cyclones rely on a pass-heavy offense, which helps to balance out their weaker ground game. While completing 115 passes of 194 attempts for 1,015 yards this season, Russellville has logged just 108 rushing yards and one touchdown so far.

"Russellville, offensively, throws the ball around really well for a team that's 1-4," said Gilleran. "They complete a lot of passes. Probably the biggest problem they have is [that] they don't rush the ball very much. There's nothing wrong with throwing the ball, but I think you've got to rush it some, and so if there's a weakness they have, [it's that] they can't run the ball well, but they do throw it well."

"None of them are really that fast, but they all catch the ball and do a good job of getting open," he said. "So we've got to stop them."

Lake Hamilton gears up to run the seam Friday night after scoring 32 touchdowns for 1,756 yards up to this point in the season.

"Defensively, they're giving up a lot of yards, and I don't know what that [number] is, but Sheridan rushed for 400-something yards against them," Gilleran said. "We feel like that's our [strength]. We're pretty good at running the ball, so that's a bonus for us. The matchup for us is we can run the ball, but our pass-defense has gotten better.

"One of the struggles we had was defending the pass against everybody. We've been working on that, trying to get that better, and because of that, we feel like if we can defend a pass against them and control the line of scrimmage on offense, we'll have a chance to win."

Gilleran noted that Russellville's kicking game could cause problems for the Wolves on Friday.

"They do have a good kicker, and he kicks it all over the field on kickoffs, but we've been working on that, too," he added. "We've been trying to work on the little things like that."

After homecoming festivities created some distractions during last week's preparation for the 42-12 Lake Hamilton win over Little Rock Hall, Gilleran said that his players have regained focus this week in practice.

"Last week we had homecoming, so that was a circus," he said. "You've got all that stuff going on with walking mates and stuff like that, so we weren't very focused last week, but this week we are."

With temperatures dropping, the Wolves look to a cooler, fall "football season" atmosphere when taking the field Friday night.

"The weather also helps out. When it's in the 70s, our kids kind of like practicing," he said with a laugh. "Practice has been really upbeat, and because of that, the weather really helped out."