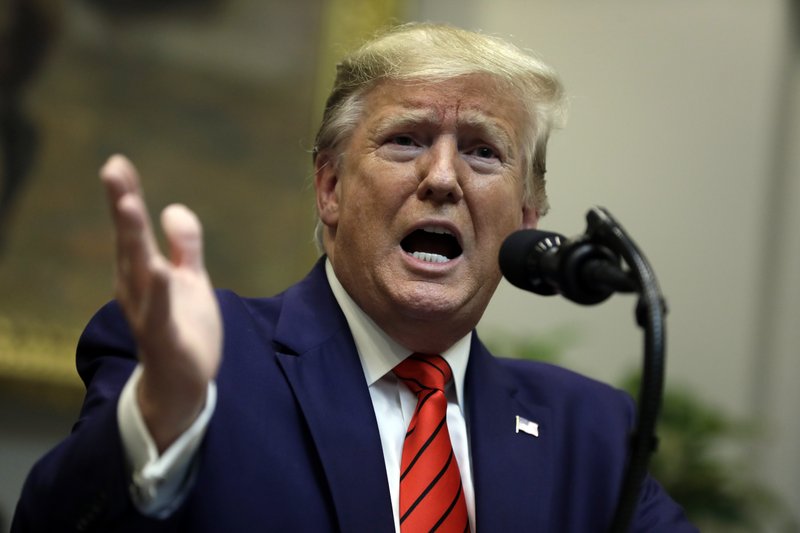 President Donald Trump answers questions from reporters during an event on &quot;transparency in Federal guidance and enforcement&quot; in the Roosevelt Room of the White House, Wednesday, Oct. 9, 2019, in Washington. (AP Photo/Evan Vucci)

WASHINGTON -- A federal appeals court ruled Friday that President Donald Trump's financial records must be turned over to the House of Representatives.

The U.S. Court of Appeals for the District of Columbia Circuit said that lawmakers should get the documents they have subpoenaed from Mazars USA. The firm has provided accounting services to Trump.

Trump went to court to prevent Mazars from turning over the records. He could appeal to the Supreme Court.

Rep. Elijah Cummings, D-Md., chairman of the House committee that is seeking the records, called for prompt compliance. "After months of delay, it is time for the President to stop blocking Mazars from complying with the Committee's lawful subpoena," Cummings said in a statement.

The House Committee on Oversight and Reform subpoenaed records from Mazars in April. They include documents from 2011 to 2018 that the House wants for investigation into the president's reporting of his finances and potential conflicts of interest. The list of documents makes no mention of Trump's tax returns, which are the subject of separate legal disputes.

In a 2-1 ruling, the appeals court batted away Trump's legal claims.

"Contrary to the President's arguments, the Committee possesses authority under both the House Rules and the Constitution to issue the subpoena, and Mazars must comply," Judge David Tatel wrote, joined by Judge Patricia Millett. Tatel was appointed by President Bill Clinton. Millett is an appointee of President Barack Obama.

Trump appointee Neomi Rao wrote in dissent that the committee should have asked for the records under the House's impeachment power, not its legislative authority.

"The Constitution and our historical practice draw a consistent line between the legislative and judicial powers of Congress. The majority crosses this boundary for the first time by upholding this subpoena investigating the illegal conduct of the President under the legislative power," Rao wrote.

The case is one of several working its way through courts in which Trump is fighting with Congress over records. The House Ways and Means Committee has sued the Trump administration over access to the president's tax returns. In New York, Trump sued to prevent Deutsche Bank and Capital One from complying with House subpoenas for banking and financial records. A judge ruled against him, and Trump appealed. Trump also is in court trying to stop the Manhattan District Attorney from obtaining his tax returns.

Trump had argued that Oversight committee seeking the records from Mazars is out to get him and lacks a legitimate "legislative purpose" for its request. His lawyers have argued that congressional investigations are valid only if there is legislation that might result from them.

The committee, for its part, has said it is seeking the Trump financial statements, accounting records and other documents as part of its investigation into whether the president has undisclosed conflicts of interests, whether he has accurately reported his finances and whether he may have engaged in illegal conduct before and during his time in office.

The committee says the House is considering legislation related to government conflicts of interest and presidential financial disclosures, among other things.