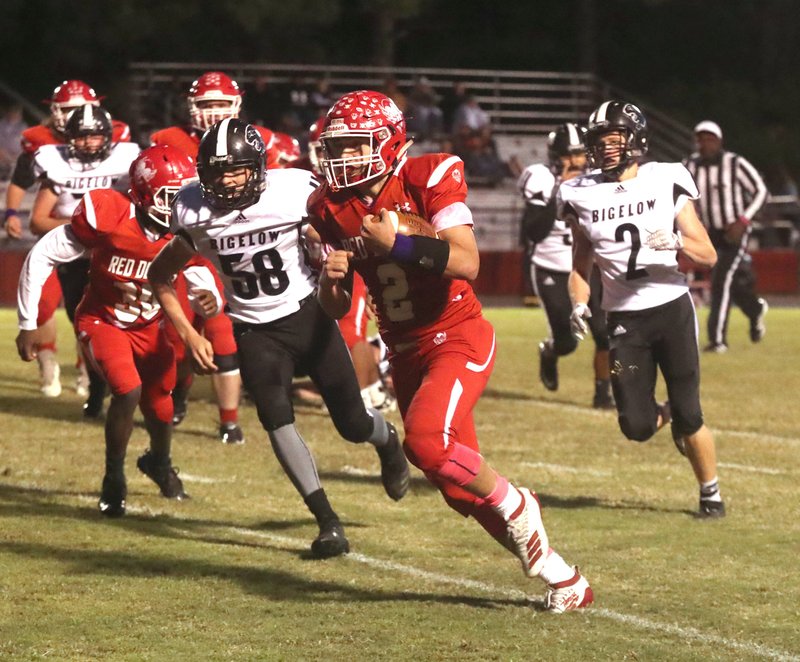 Mountain Pine senior quarterback Collin Smith (4) rushes down the field for a touchdown in Friday’s 60-42 win over Bigelow at Stanley May Field. Smith had 26 carries for 351 yards and rushed for seven touchdowns while throwing for the other. - Photo by richard Rassmussen of The Sentinel-Record - Photo by Richard Rasmussen

MOUNTAIN PINE -- Bigelow made a big comeback in the second half after trailing Mountain Pine 40-14 at the half, but the Red Devils, led by senior quarterback Collin Smith, held on to take a 60-42 win over the Panthers at Stanley May Field Friday night.

Smith accounted for 368 of the Red Devils' 449 yards, running the ball into the end zone seven times and throwing a touchdown pass to Kayden Anzaldua. Seniors Jace Chacon and Hayden Barnes led the Red Devils defense with 10 tackles each, including 1.33 sacks.

The Red Devils added 32 points in the second quarter while allowing just one touchdown for the Panthers to take a 40-14 halftime lead.

Mountain Pine's defense came out slow in the second half as the Panthers scored on three of their four drives in the third quarter to pull within 48-34 after the Red Devils had pulled out to a 34-point lead with 7:37 off the clock in the half. Brown broke free on a 57-yard run for the end zone on the Panthers' third drive of the half after breaking at least four tackles on his way.

The Red Devils recovered and scored two more touchdowns, an 11-yard run and a 66-yard run both by Smith, to push out to a 60-34 lead with 3:27 left in the period. The Panthers found the end zone once again to set the final with 19.1 seconds left in the game.

Smith was 3-for-9 passing for 30 yards, but he was most impressive with his feet as he averaged 13.0 yards per carry with 26 touches for 338 yards. Chacon and classmate Jeremiah Walker both finished with 43 yards, Chacon with four touches and Walker with 14. Anzaldua had a pair of catches for 20 yards with Josiah Walpole reeling in one for 10.

Both teams struggled with penalties with the Panthers taking five calls for 40 yards and the Red Devils four for 45, but Mountain Pine won the turnover battle as they had two turnovers while forcing three for Bigelow. Bigelow had five fumbles, losing two, and Mountain Pine lost both of their fumbles. All of Mountain Pine's penalties were on the defense or special teams.