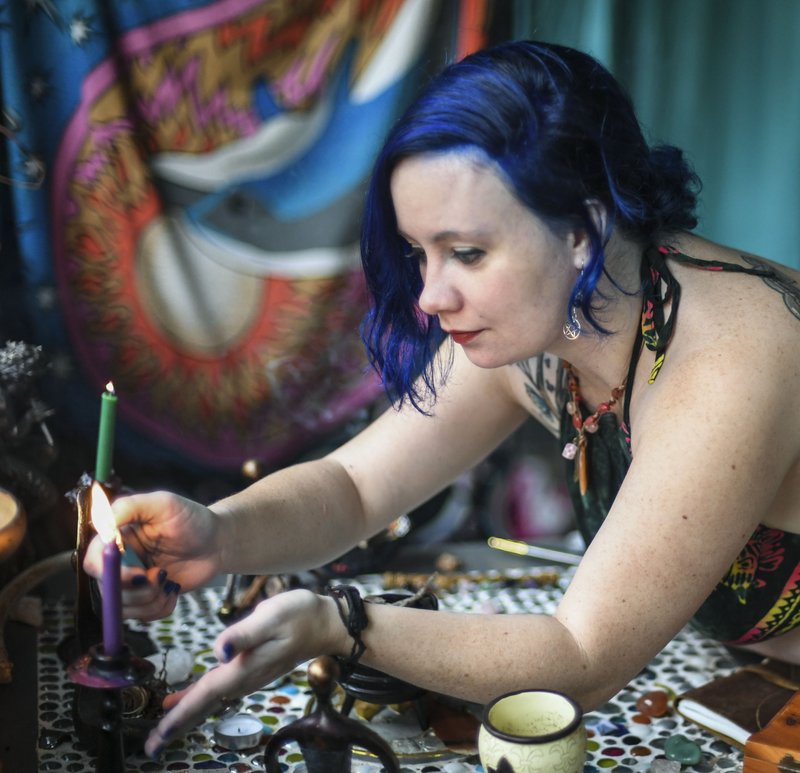 Local Wiccan Karrie Griffin has her photo taken lighting a candle on her altar. - Photo by Grace Brown of The Sentinel-Record.

October brings the return of crisp, autumn days filled with vibrant colors, fall decorations and the anticipation of exciting Halloween celebrations and festivities.

While preparing to either costume up for a day of candy-crazed trick or treating or a night of Halloween house parties, one may consider a variety of creative characters and their coordinating looks, including that of the famed witch's black hat and broom.

Many people, however, mistake the image of Bette Midler's Winifred Sanderson "witch" character with that of a true year-round Wiccan, but the two couldn't be more different.

According to local Wiccan Karrie Griffin, of Hot Springs, "Wicca is the belief of the balance between the god and goddess. Wicca has a lot of traditions, (and) like Christianity, (it) has different paths ... Wicca is different," said Griffin. "We take some of the older traditions and bring them into our own. Essentially, it is the balance between the wheel of the year which is the cycle of earth (the different seasons)."

Among the most popular religions to have blossomed since the 1960s, Wicca still faces a struggle for acceptance. However, naturally a nature-bound religion, Wicca has a sole focus on the "divine in nature."

After eight years of being locally involved in Wicca, Griffin has developed close connections and relationships with other Wiccans in the area while encouraging individual and community growth.

While claiming that her peers have always made her feel accepted in the Wiccan community, Griffin expressed that she has felt nothing but welcome since day one.

"Around here, there's only a few who actually practice Wicca, but most of my personal home group here is Wiccan, or some sort of branch of Wicca," Griffin said. "We follow the moon cycle and it's part of our path, per se. ... We do a lot of community involvement when it comes to growth in community, growth in ourselves (and) connecting [to] the earth and nature."

Griffin began her journey practicing the natural, earthbound ways of Wicca while placing an emphasis on her studies and educating herself in various worldwide religions.

When she was growing up, Griffin claims to have obtained a buffer of encouragement in her pursuits of understanding Wicca as her godmother also took part and thus, supported her interests. Griffin said her father also played a part as she recalls him to have always been very "nature-oriented" throughout the years.

"My dad was very "nature-loving," she said, and her godmother was "this loving, sweet person ... I wanted to be more like her."

Griffin confirmed that being a Wiccan can sometimes be misconstrued and misidentified with the witch-figure influenced by popular culture.

"I'm excited about this article," she said. "When my friend told me that you all are doing an article over it, it made me joyous, because there is a lot of negative stuff that surrounds Wicca. We believe that you choose and believe in your own path ... whatever feels right and comes to you. ... We have a lot of different people that bring into."

In an effort to shed light on what sets Wicca apart from the notion that it coincides with that of a witch's ideologies, Griffin explained the difference between what her own Wiccan community truly considers to be practicing magic as opposed to what could be a possible misconception.

"Wicca and witchcraft are two different things," Griffin said. "But a lot of Wiccans do practice witchcraft, but (it) isn't what you'd think like in the movies. It is generally taking energy and manipulating it ... it is the natural things like herbs into remedies, and setting your attentions out into the universe."

Griffin wishes to encourage others in adhering and following their inner voice.

"Follow what your soul is telling you," she said. "I was criticized and put down by a lot of loved ones. But listen to your soul. It's not a closed book. ... What you put out, you get back in."

While many characteristics of Wicca does not match up with that of a common stereotypical Hollywood witch, Griffin countered that Wiccans do come together in "covens" with the intent of showing their respect for the natural world.

"We have a lot of covens, but covens are generally like a church," she added. "It's a place where we gather together with our close friends and relatives to honor nature ... we should respect it. You see a lot of people who are vegetarian or vegan and not Wiccan, but it's all about the balance.

"When you take, be aware and acknowledge the sacrifices made for you, so if you are eating, you are being thankful for that, but you're not taking more than you have to. You're not taking less either. That goes with all of life, family (and) the materialistic things."