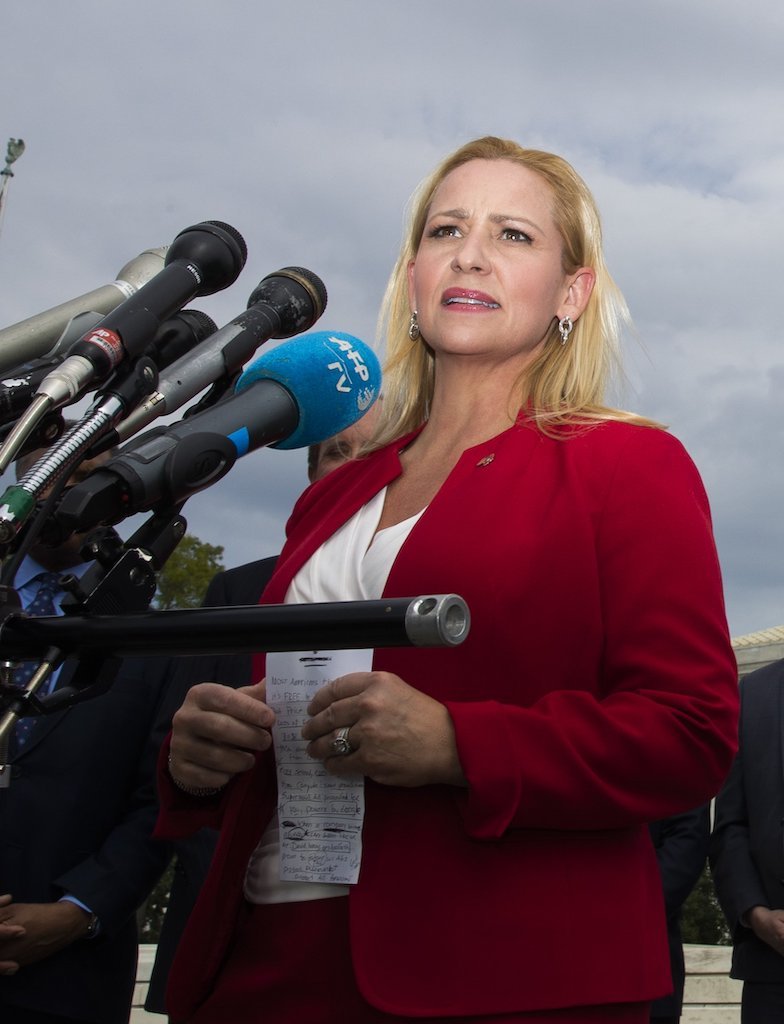 Arkansas Attorney General Leslie Rutledge speaks to reporters in front of the U.S. Supreme Court in Washington on Sept. 9. - Photo by The Associated Press

PEARCY -- An "outrageous number" of school-age children in Arkansas are becoming addicted to vaping in what is becoming an epidemic, Arkansas Attorney General Leslie Rutledge said Tuesday.

Rutledge was the keynote speaker Tuesday evening at the Garland County Farm Bureau's annual meeting at Lake Hamilton School, and while her speech largely dealt with agricultural issues, she briefly addressed the dangers of the "vaping epidemic," and her efforts to stop it, including filing lawsuits.

"I know that I'm standing in a high school that's probably no different than any other high school across the state that is facing this challenge," Rutledge said.

Rutledge told the crowd part of the issue is that the minors who are vaping do not understand how harmful it can be. "Just because ... the makers of these e-cigarettes tell you it's safer than traditional cigarettes does not make it safe," she said.

"We are seeing 15-year-olds with lungs that look like a 70-year-old's," Rutledge said.

Rutledge told The Sentinel-Record prior to her speech that she is focusing on the issue after learning that large numbers of youths are addicted to vaping.

"As I've traveled to all 75 counties ... I've been meeting with school officials. Every single one of them have told me about vaping problems they have had with young people," she said. "And not just high school students but junior high and middle school students, and even some elementary kids have been vaping.

"It's not something where it's just one or two (students) -- it's 40, 50, 60%. An outrageous number of young people are commonly using e-cigarettes and not knowing what they are putting into their bodies, ingesting into their lungs," Rutledge said.

Calling vape pods "extraordinarily addictive," Rutledge said e-cigarettes and vaping are "creating an entire generation of people who are addicted to nicotine."

Rutledge said many of the teenagers are unaware there is nicotine in a vape pod. "They believe it's just flavored water."

According to a news release on Oct. 10, her office filed lawsuits against Utah-based BuyVapor.com, Arizona-based The Vape Co. and Minnesota-based Mystic Juice USA LLC.

"By selling and shipping nicotine products and devices, including e-cigarettes, to Arkansas children without age verification, the companies are in violation of the Arkansas Deceptive Trade Practices Act," the release said.

The lawsuits alleged all three companies sold and shipped vape products to customers in Arkansas and failed to confirm the consumers' ages, which are violations of state law.

Rutledge noted Tuesday that the merchants were selling tobacco products to minors, but regardless of the age of the buyer, it is illegal to deliver tobacco into Arkansas. "One of the sites we sued actually shut down its site that day," she said.

Rutledge said she is confident the state will continue to educate parents and young people about the dangers of vaping.

She said they will have to address "the number of young people that we have that are already addicted who do not appreciate and understand the dangers."