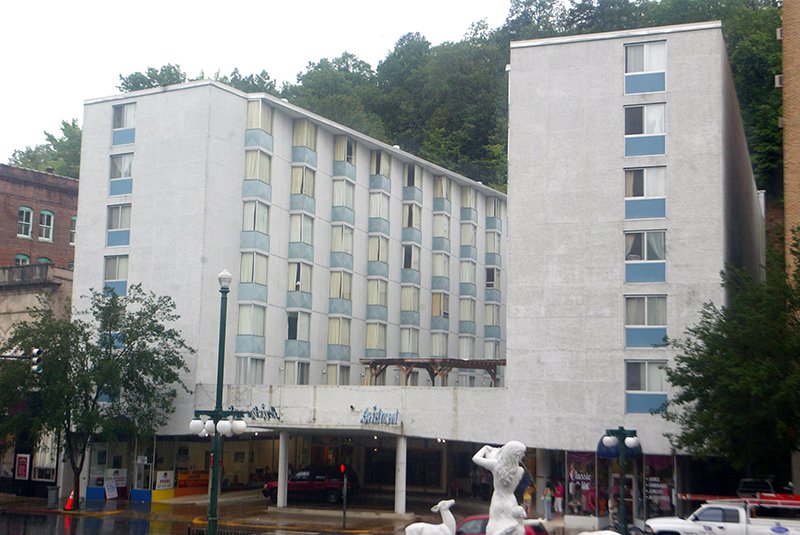 The Aristocrat Manor Apartments. - File photo by The Sentinel-Record

The owner of the Aristocrat Manor Apartments pleaded no contest earlier this week in Garland County District Court to 34 violations of the city's property maintenance code, the latest development in a series of enforcement actions the city and federal regulators have taken against the downtown property that provides subsidized housing to elderly and disabled tenants.

Deputy City Attorney Terry Askew said the court levied a $1,700 fine, or $50 per violation, against owner Marshall Coffman. Many of the violations overlapped with deficiencies inspectors from the U.S. Department of Housing and Urban Development identified in January and May. HUD notified Coffman in April that he was in violation of the 2000 agreement entitling the property to Housing Assistance Payments as part of its participation in the Section 8 program.

According to rent rolls The Sentinel-Record obtained through public records requests, Coffman's company receives more than $60,000 a month in HAP subsidies for a property a May report from HUD said wasn't meeting the agency's minimum standards for Section 8 housing.

"The condition occurred because an effective corrective and preventive maintenance program has not been implemented at the property," the May 31 Management and Occupancy Report provided in response to a records request said. "The effect is the property not meeting HUD's definition of decent, safe and sanitary condition, and poor curb appeal/general appearance of the property."

Issues listed in the report included water damage, mold/mildew in laundry rooms, water puddles that created "a mold/mildew-like slippery slime" in common areas, rotted exterior wood frames bordering common areas, chipped and cracked exterior stucco and "general dirt and grime" on the corners and back of the building.

The Aristocrat is a project-based Section 8 property where tenants pay up to 30% of their incomes toward rent and HUD subsidies pay the balance. According to the most recent rent data the newspaper obtained, the property charges $886 to $916 a month, utilities included, for the 440 square foot efficiency apartments. The building has about 100 units.

The rates are significantly higher than fair market rent HUD established for Garland County, but HUD has said the 2000 agreement exempts the property from fair market standards. The agreement expires at the end of January. That's also the deadline HUD gave Coffman to remedy maintenance issues or make way for third party management.

In addition to owning the property, Coffman's company also manages it, according to correspondence obtained from a records request. HUD had set a June 22 deadline but extended it in August, explaining that the Aristocrat's cooperation and the repairs it had made warranted a grace period. HUD said it will decide in February if a third party needs to assume management.

Correspondence between the Aristocrat and HUD showed HUD has required updates every two weeks on the status of repairs and financing the property is attempting to secure for a renovation.

Coffman representatives have told HUD financing is contingent on HUD renewing the HAP contract that expires at the end of April. They have asked for the renewal to be fast-tracked, explaining that it would expedite approval of a loan. An email from Lay Commercial Mortgage Co. in Little Rock forwarded to HUD said the property is eligible for up to a $5.4 million loan, which would be contingent on renewal of the HAP agreement.

HUD said Friday that it intends to renew the agreement, and that it won't condition renewal on the Aristocrat obtaining financing for renovations.

Arvest Bank holds a $2.75 million mortgage on the property, according to property records, debt a Coffman representative has said is partially serviced by HUD subsidies.

The city granted the property a permit in August for an $89,818 roof replacement. Askew confirmed the roof has been replaced.

"They were satisfied they addressed the violations they were charged with," she said of city inspectors who cited the property in May after violations identified during an April inspection had gone uncorrected.

A July 10 letter ownership sent HUD blamed roof problems on a toilet that had been thrown out of an adjacent building. The letter said the toilet landed on the roof and damaged it, leading to 15 of the 34 code violations.

Infestation was among the violations. The city has received numerous complaints about bedbugs at the Aristocrat in recent years, including its transportation services department complaining in November 2017 about Aristocrat residents carrying bedbugs onto city buses.