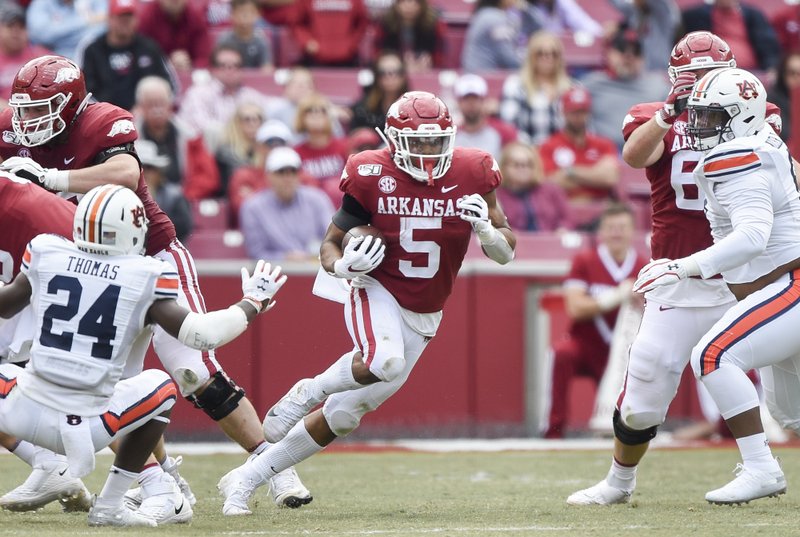 Arkansas running back Rakeem Boyd (5) carries the ball during the third quarter of Saturday's game at Donald W. Reynolds Razorback Stadium in Fayetteville. Photo by Charlie Kaijo of the NWA Democrat-Gazette

FAYETTEVILLE -- The University of Arkansas' biggest concerns about No. 11 Auburn -- an imposing defensive front, superior team speed and quick-strike capabilities -- all reared their heads in the first five minutes on Saturday.

Auburn defensive end Marlon Davidson recovered his own strip-sack on the third play of the game. The Tigers reeled off a pair of three-play touchdown drives in the first five minutes and were never threatened en route to a 51-10 rout before an announced crowd of 54,619 at Reynolds Razorback Stadium.

The attendance, based on tickets distributed, was the lightest for a game in Fayetteville since 2003 and the worst against an Southeastern Conference opponent since the 2001 expansion of Razorback Stadium.

Arkansas (2-5, 0-4 SEC) dropped its fourth consecutive game, lost its fourth in a row to the Tigers (6-1, 3-1) and its 15th consecutive SEC game in a row. The 41-point losing margin was the widest during the 15-game SEC losing streak.

The Razorbacks also fell in their ninth consecutive SEC home game, dating back to a 31-10 upset of No. 11 Florida in 2016.

"We took two big haymakers right out of the gate," said Arkansas coach Chad Morris, who is 0-12 against SEC opponents. "We talk all the time about you can't give a great football team any help.

"We did that, but I will say this. I thought once we stabilized, and we went on a span there of about 32 or 33 minutes where our defense was exceptional, and we gave up three points."

The Razorbacks lost two fumbles, and quarterback Ben Hicks, making his first start since Sept. 7 at Ole Miss, threw his first interception of the year as Arkansas lost the turnover battle 4-1. Arkansas' other turnover came on a fake punt on fourth and 11 early in the second quarter, when the the Tigers sniffed out Sam Loy's pitch for De'Vion Warren.

Coming off an open date and looking fresh, Auburn spread the ball around to its playmakers and had six skill players score touchdowns.

The Tigers, limited to 225 total yards by Arkansas in last year's 34-3 victory in Auburn, Ala., more than doubled that, racking up 491 yards with a run-heavy attack. Auburn rushed for 298 yards and passed for 193 while holding the Razorbacks to a season-low 234 total yards, including 52 on the ground.

"Stopping the run and running the football, it's how we win at Auburn," said coach Gus Malzahn, who improved to 6-1 against Arkansas. "Today we were able to do both. When we do that we're a good football team."

Morris was asked if the rebuilding job he inherited at Arkansas was tougher than he imagined.

"I can tell you this," he said. "There's a group of young men in that locker room over there that are going to stay in the fight. There's no quit in us.

"You know, there's only one thing to do, and that's go back to work. I know everybody's frustrated, and we're not having the success that we all want to have, that everybody wants to have. The only thing to do is for us to go back to work and keep pushing forward and keep developing the guys on our roster and keep recruiting. That's it."

Auburn freshman Bo Nix completed 12 of 17 passes for 176 yards and three touchdowns and accounted for four scores. Nix went 8 of 8 for 131 yards after halftime, while throwing all three of his scoring passes.

"We didn't finish off the first half very well," Nix said. "We moved the ball; we just couldn't score. The second half we came out and threw the ball around, and it was very good."

Kam Martin broke off a 52-yard run at right end on the first snap of Auburn's second series to set up a touchdown, and he led the Tigers with 84 rushing yards.

Davidson yanked the ball free from Hicks as he drew back to pass on the game's first possession, and Davidson recovered at the Hogs' 22. Three plays later, Nicks ran a keeper off the left edge for a 4-yard touchdown.

Shaun Shivers scored on a 6-yard edge run two players after Martin's breakaway to make it 14-0 at the 10:48 mark of the first period.

Auburn's only points on its next five series came on Anders Carlson's 44-yard field goal in the final minute of the first quarter.

"I think we got stunned early," Arkansas linebacker Bumper Pool said. "Then we played some really good defense. I think everyone just got settled into the game, started doing what we're coached to do, playing physical."

Joe Foucha shot through a gap and upended backup quarterback Joey Gatewood on a fourth-and-1 run on Auburn's third series, Carlson missed a 47-yard field goal after a combo sack from Pool and T.J. Smith, then the Tigers went three and out as the Arkansas defense began to get traction later in the first half.

"Offensively, we got off to a good start, but kind of fizzled in the second quarter," Malzahn said. "Give them credit. In the second half, we were able to run the football and we hit a couple of explosive pass plays that kind of opened everything up."

Hicks went the distance at quarterback, other than three direct snaps to Traylon Burks and Cheyenne O'Grady, and completed 19 of 39 passes for 182 yards, with a touchdown and an interception.

"I thought I played OK and made some good throws and tried to sustain some drives, and we were able to do that a couple of drives, but obviously the way we started wasn't good enough," Hicks said. "The turnover on the third play of the game, and I think two or three three-and-outs put our defense in a really tough spot."

The Tigers limited Rakeem Boyd, the SEC's leading rusher, to 39 yards on 13 carries.

The Razorbacks tried some trickery in the first half, a fake punt thrown by punter Sam Loy, but it didn't work. Loy's two-handed pitch a few yards in front of his blocking shield was off-target for De'Vion Warren and Auburn's Chandler Wooten intercepted the pass and returned it to the Arkansas 37. The Tigers could not cash that takeaway into points, but converted two other takeaways into touchdowns.

Arkansas did the same with its lone takeaway, Agim's recovery of a Nix fumble forced by De'Jon Harris at the Auburn 45.

On the next snap, Hicks made a heady check at the line of scrimmage and found O'Grady running alone over the left side. O'Grady rumbled to the Auburn 5 before Big Kat Bryant swatted the ball out from behind. O'Grady kept his wits, plucked the ball out of the air and completed the 45-yard touchdown to make it 31-10.

Arkansas' only other points came on a 28-yard field goal by Connor Limpert that capped a 16-play, 77-yard drive on the Hogs' first series of the second half. Limpert also missed a 44-yard field goal on the last snap of the first half.

The Razorbacks return to action on Saturday at 6 p.m. against defending SEC champion Alabama.