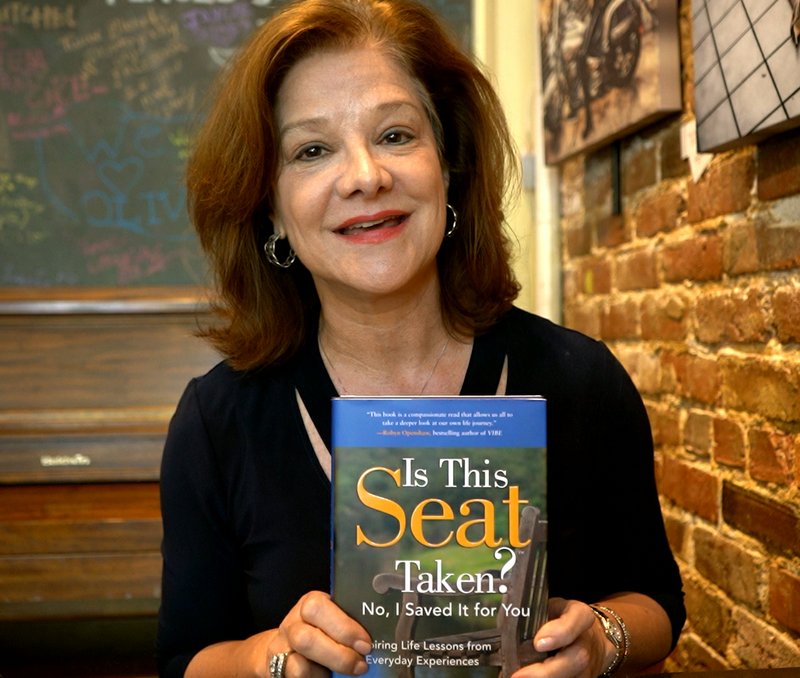 Kristin Kaufman discusses the three books in her "Is This Seat Taken?" series. - Photo and Video by Cassidy Kendall of The Sentinel-Record

"This last book is a collection of stories from people and experiences in my life -- some positive, some pretty challenging -- that gave me wisdom and a perspective that I felt compelled to share with others," Kaufman said.

Like the first two books in the series, she said the third book is relevant to anyone because it's about the challenges and hardships in life, as well as people that "cross our path" that everyone can learn from.

First, she said she wants people to realize the beauty of staying present in the moment and that the "incidental" encounters are not incidental.

Second, she said she wants people to realize success is defined on their own terms.

"Even if you're not tracking success of societal terms does not mean you aren't successful and you are living the life you're meant to live. It just means maybe you're going down an uncharted path, which I think is a really important lesson people embrace and we don't feel like we can't color outside the lines."

Lastly, she said she wants people to realize their purpose.

Kaufman said with the aspirations and responsibilities that come with her full-time job, it takes about one year to complete one of her books, but the fact that it is a "calling" motivates her to write them.

"In today's world it's very difficult to make a lot of money writing a book, that's not why people write books anymore, you write it because you have something to say and feel compelled to share it," she said. "I felt compelled to share these stories (and) give a lot of people a name and a voice."

She said she has categorized all three books as "storybooks" rather than "self-help" books.

"They're not self-help in that 'Here are the 10 Things to Know to Live a Rich Life,' they are really all about stories," she said. "And the way they're formatted is you don't have to read them chronologically, and at the end there are questions I ask people so they can take what they've read and apply it to their own life. That's about as self-help as it gets. Because I don't really believe anyone has the answers but you. The answers are within us."

Describing herself as a "recovering corporate executive," Kaufman said her first book came from people she would meet randomly when traveling around the world for her job.

"I would meet these people who would really enrich my life and give me wisdom just through incidental encounters, which I don't really believe are incidental," she said.

Kaufman said the second book came about when she launched her own business and began to work with people who had reached a pinnacle in their career, yet they still weren't fulfilled.

"They were struggling with 'Is this really all there is? Is this really what I was put on this planet to do?' And they thought it was too late to create the life that they really wanted to live," she said. "So I began to research 'late in life success stories.' So the second book in the series is a collection of stories from real people who created a life that they wanted to live later in life; in some cases 87-plus years old."