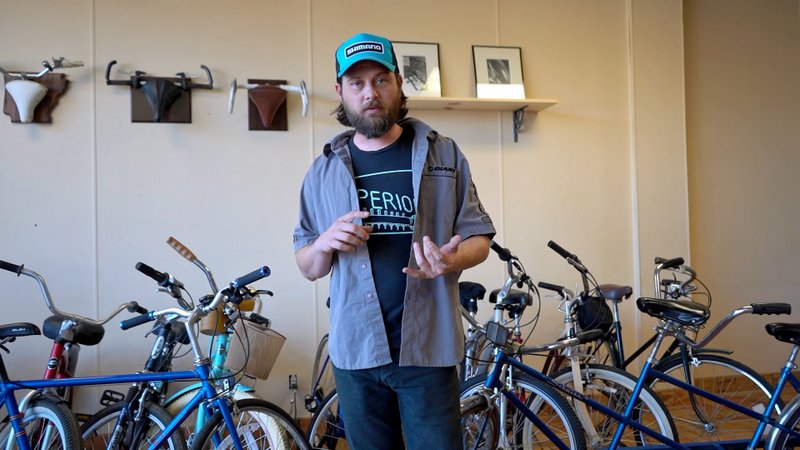 Coleman Gocio talks about his business. - Photo and video by Cassidy Kendall of The Sentinel-Record

The company, located at 436 Broadway St., provides bicycle rentals, repairs and guided tours -- with the option of riding on a recycled vintage bike.

"I'm renting out bikes that are from different time periods, so you can rent out a bike from the 1960s and ride around. So kind of cool, vintage bikes. A lot of the bikes would have ended up in a landfill, so I'm kind of recycling stuff, reusing stuff. I think that's a big part of it, too," Gocio said.

The company provides two guided tours: one of the downtown springs and one of the Hot Springs Creek Greenway Trail that focuses on its art.

"When the Greenway gets a little bit longer, I'll be doing just a solo ride along the Greenway, but for now, since it's a little bit shorter, we're doing more stuff about the sculptures and trying to highlight the art in the city and stuff too," Gocio said.

Realizing his "knack" for repairing bicycles while attending Pacific Northwest College of Art in Portland, Ore., Gocio said he went on to attend the United Bicycle Institute in Ashland, Ore., where he took courses in bike mechanics, suspension and wheel building.

Gocio has now worked in the cycling industry for 10 years in Oregon, Hawaii and Arkansas.

A Hot Springs native, Gocio moved back to the city four years ago and saw the need for a bike rental business to promote the Greenway Trail and to get more people on bikes in downtown, he said.

Gocio said his company will benefit Hot Springs by getting more people on bikes, which he noted are better for the environment because they are zero-emission and have a lower impact on the roads, as well as people's health.

According to betterhealth.vic.gov, cycling can help to protect people from serious diseases such as stroke, heart attack, some cancers, depression, diabetes, obesity and arthritis.

"My main goal is to get people who see cycling as intimidating, on bikes -- I want to get your grandma on a bike," he said. "I think cycling and being able to get around on a bike in the city, it makes for a closer-knit community."

Gocio said Hot Springs tends to be bike-friendly, but there are some improvements to be made to increase the safety of the cyclists.

"In a bigger group, if you're in the actual (bike) lane, traffic seems to be really respectful," he said. "I've definitely ridden my bike by myself and it can be a little bit scary, but if you make yourself basically a presence on the road, if they see you, nobody wants to hit a cyclist."

Gocio said the tours he has led so far have consisted of groups of two to three people, and they have all been moderately safe.

"The downtown (tour) would be more geared toward adults," he said. "The Greenway (tour) is geared more towards all ages, until downtown gets a bit more safe, which I think it will, especially with having more cyclists on the road."

Gocio said he thinks safety for cyclists will improve with more awareness among drivers, a dedicated bike lane and more signage.

"I think it's a really good thing to have a sign that tells cyclists they're allowed to be in the whole lane, not over to the side, because that's when a lot of accidents occur; when cars try to pass in the same lane that you're in and they'll clip you when they're coming back in. So if you're in the lane and they see you, they will have to get in the other lane and get all the way around you."

He noted his company provides riders with helmets, as safety is one of its main priorities.