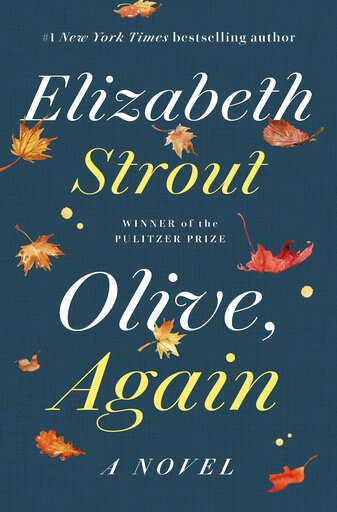 It should come as no surprise that Olive Kitteridge does not mellow with age.

The large, gruff woman who was the propelling force in Elizabeth Strout's book of short stories that won the 2009 Pulitzer Prize for fiction -- the simply titled "Olive Kitteridge" -- returns in Strout's new collection of stories, "Olive, Again."

As before, Olive is either a central character or plays a peripheral role in each of the 13 stories. These stories unfold chronologically, for the most part, as Olive ages from her 70s into her 80s, increasingly hit with the physical and emotional afflictions of her years.

The Olive Kitteridge of Strout's first collection of stories -- a seventh-grade math teacher in a rural Maine town -- was a captivating literary original. Singular and wise but rough-edged, she gave a book of short stories the range and depth of a novel.

In the new collection, Olive is still a contrary woman, blunt and condescending. Some old issues -- family friction, marital secrets, sickness, death -- return once more. Having met Olive already in the first book, she is no longer a fascinating new creation. But part of the appeal of this book is that Olive hasn't changed; she is still the irascible older woman in familiar Maine surroundings, whose standard cuss word is "Godfrey."

As in the first book, some of the stories can stand alone without Olive. In "Cleaning," for example, Olive is little more than a conspiratorial ally of a 14-year-old girl who is experiencing the torments of family and adolescence, along with an odd and awkward sexual awakening. The story belongs to the teen.

Other stories fill the gaps in Olive's life as she grows old. These include the affections of a man who wants her to live with him, and Olive's agonizing relationship with her son and his growing young family in New York. As Olive ages, Strout doesn't spare the intimate cruelties of the body's and mind's decay.

Strout's writing is fluid and straightforward, with touches of descriptive grace: "It was low tide, and the seaweed lay like combed rough hair, all in one direction. The boats that remained in the bay sat graciously, their thin masts pointing to the heavens like tiny steeples."

Strout brings characters from her other fiction into "Olive, Again," such as Bob and Jim Burgess from her novel "The Burgess Boys." It may be that Olive, now in her final years, will show up yet again in some other Strout fiction, but the hour is getting late.