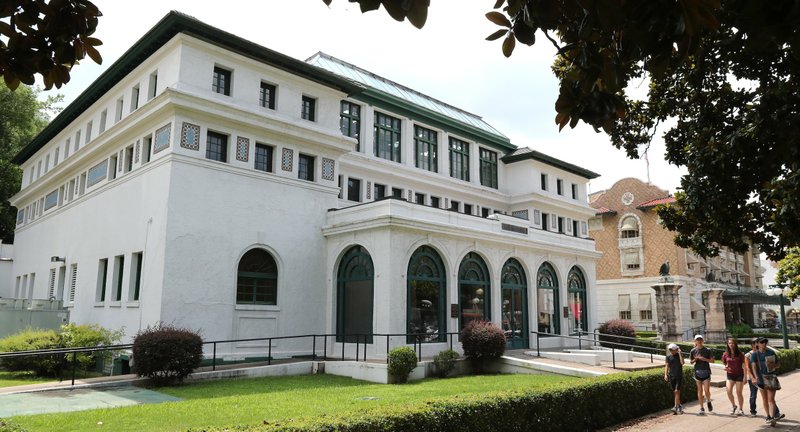 Bathhouse Row near the Maurice Bath House. - File photo by Richard Rasmussen of The Sentinel-Record

The National Park Service on Saturday recommended that all building owners/lessees in Hot Springs National Park discontinue using all showers plumbed to thermal water sources and begin disinfecting all tubs using thermal water due to the presence of Legionella bacteria.

The national park has taken the added steps to "protect public health and reduce the risk of Legionella exposure based on ongoing testing and evaluation," the agency said in a news release.

"Mitigation actions will further reduce the risk, and are appropriate steps in protecting public health. The park will begin working on a water management program to develop long-term mitigation techniques to reduce the risk of the bacteria as best as possible," the release said.

"While there are inherent risks to using natural water sources," the Park Service is "committed to mitigating the risk from Legionella bacteria while maintaining the integrity of the historic use of the park," the release said.

The release said the park's facilities and businesses remain open and offering guest services, "however, based on ongoing testing and evaluation, the National Park Service (NPS) is recommending all facilities receiving thermal waters take immediate action to mitigate public risk."

The Arkansas Department of Health said in early October it had received environmental test results showing the presence of Legionella bacteria in one untreated water source, separate from the drinking water system, within the Quapaw Baths & Spa.

The Quapaw closed for several days in August after preliminary results from testing indicated the presence of the bacteria. The bath house reopened after final test results showed the preliminary indication had been erroneous.

A follow-up test, however, confirmed the presence of the bacteria in water taken from one of the showers, Jennifer Dillaha, the Health Department's medical director for immunization, told the Arkansas Democrat-Gazette earlier this month.

While it is not uncommon for building water systems to deliver positive test results for Legionella bacteria, "it is rare for people to get sick," Saturday's release said.

"Facilities can reduce the risk of bacterial growth by taking a few recommended steps," it said, adding that discontinued use of showers plumbed to thermal water and the disinfecting of tubs comes at the recommendation of National Park Service Office of Public Health in coordination with public health partners the Arkansas Department of Health and the Centers for Disease Control and Prevention.

The release said "aerosolized water droplets (mist) containing Legionella bacteria can cause a severe pneumonia called Legionnaires' disease when breathed in. Water is aerosolized when it moves through faucets, whirlpools, hot tubs, and shower heads."

Most exposed to Legionella will not get sick, but it can cause severe illness in some, it said.

People who are at increased risk of getting sick include people 50 years or older, smokers, and those with chronic lung disease, weakened immune systems, or underlying illnesses such as diabetes, kidney failure, or liver failure, the release said.

Symptoms of Legionnaires' disease usually begin two to 14 days after exposure and can include cough, shortness of breath, muscle aches, headaches, and fever. Additional symptoms may be present, such as headache, confusion, nausea, or diarrhea. Legionnaires' disease can be treated with antibiotics. Visit https://www.cdc.gov/legionella/index.html for more information.

Anyone who tests positive should inform the Arkansas Department of Health as soon as possible at 501-537-8969.