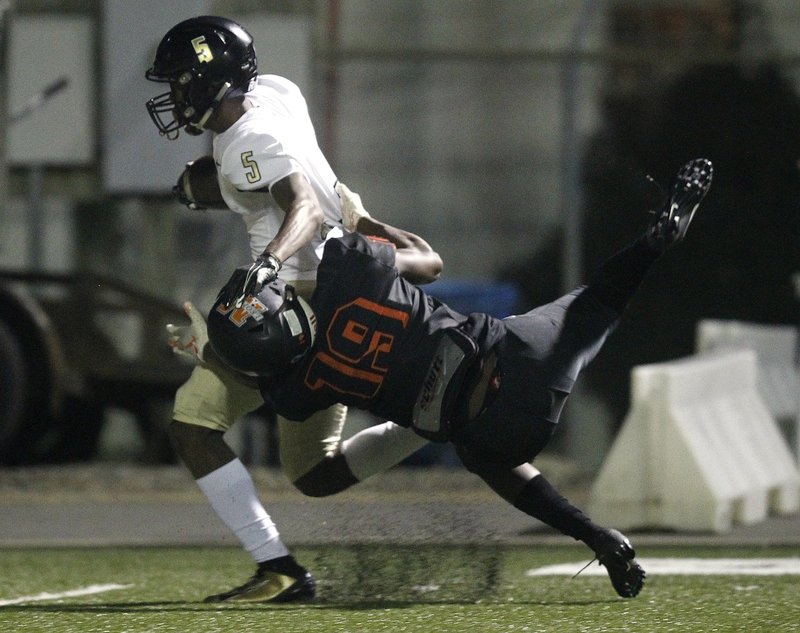 MALVERN -- Joe T. Robinson tuned up for one 4A-7 Conference contender by making quick work of another Friday night.

A second-quarter scoring barrage helped the Senators turn a close game into a rout during their 46-7 victory over Malvern at Claude Mann Stadium.

Junior running back Hunter Smith carried 15 times for 152 yards and 2 touchdowns for Robinson (6-1, 3-1), which took advantage of its speed on the edges to overcome moments of uneven play against an upstart Malvern team.

The Leopards (3-4, 2-2) had won two games in a row and were coming off a 45-14 victory over Ashdown a week ago, but Malvern had trouble dealing with Robinson's size and quickness.

"We knew we'd be in for a battle," Malvern Coach J.D. Plumlee said. "We fought, but that team is so talented ... up front, in the backfield, on the outside. We turned the ball over some, too, and you can't give a team like Joe T. extra possessions.

"We eventually kind of just ran out of gas, but all the credit goes to Joe T. There's no doubt in my mind that they'll go deep in the playoffs."

Quarterback Buddy Gaston completed 10 of 14 passes for 191 yards and 2 touchdowns for Robinson, which piled up nearly 500 yards of offense in gearing up for next week's showdown against Bauxite. The junior also ran for two touchdowns. The Senators' defense chipped in as well by recording 15 tackles for losses, including five sacks, and forcing Malvern into four turnovers, three in the first half. Robinson did commit 10 penalties for 100 yards.

"It wasn't a clean game at all," Robinson coach Todd Eskola said. "You're never upset with a win, but we've got a lot of corrections to make. We haven't had that many penalties all year long.

"It seemed like every time we got something started, a flag was thrown. We've got to figure out how to correct those things."

The Leopards doomed their chances with turnovers, none bigger than a fumble midway through the second quarter.

Robinson held a 14-0 cushion after Gaston tossed touchdown passes to wide receivers N'Kiyah Davis and Ivan Thomas in the first quarter, but Malvern quarterback Cedric Simmons closed out a 10-play, 66-yard drive with a 15-yard touchdown run to slice Robinson's lead to 14-7 with 8:19 left until halftime. The Leopards then recovered the ensuing onside kick, but on the next play, the Senators forced and recovered a fumble on their 35. Four plays later, Smith rumbled in for a 13-yard touchdown to give Robinson a two-score advantage.

"That fumble kind of suck the winds out of our sails," Plumlee said. "There's no doubt that that was kind of our last grasp there because we had the momentum. Those things happen sometimes.

"But good football teams create turnovers, and [Robinson] did that."

Gaston tacked on a 2-yard score with 4:56 left in the period and Smith rumbled in for a 10-yard touchdown at the 2:08 mark to give the Senators a 34-7 lead at halftime. Gaston's 7-yard score with 4:34 left in the third quarter pushed Robinson's margin to 40-7 before senior running back Derrick Alexander scored on a 27-yard run early in the fourth quarter.

"These kids want to get better all the time, and as a coach, you love that," Eskola said. "They were upset at halftime because they weren't satisfied. They want to be the best they can be, and I don't think we were [Friday].

"But that gives them motivation to go out and be better next week with a good Bauxite team coming in."