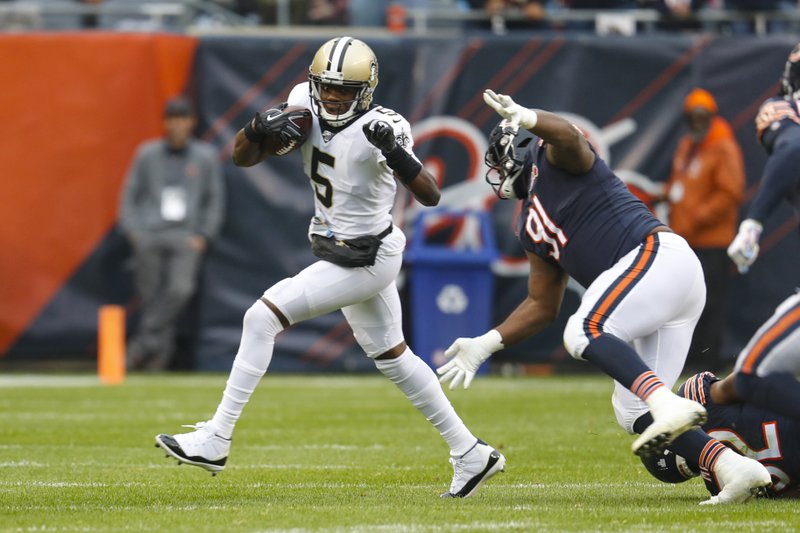 The Associated Press CHASED BY A BEAR: New Orleans Saints quarterback Teddy Bridgewater (5) is chased by Chicago Bears nose tackle Eddie Goldman (91) during the first half of Sunday's game in Chicago.

CHICAGO -- Teddy Bridgewater threw for 281 yards and two touchdowns, and the New Orleans Saints improved to 5-0 without injured starter Drew Brees with a 36-25 victory over the Chicago Bears on Sunday.

The Saints (6-1) again showed why they still see themselves as Super Bowl contenders even though their star quarterback is out indefinitely because of a torn ligament in his right thumb.

Bridgewater completed 23 of 38 passes, Michael Thomas had nine receptions for 131 yards, and Latavius Murray ran for 119 yards and two touchdowns.

Besides Brees, New Orleans had to get by without top running back Alvin Kamara (ankle, knee) and top receiving tight end Jared Cook (ankle). Both players were ruled out Friday, but that didn't stop the NFC South leaders from taking down the Monsters of the Midway.

The Bears (3-3) lost their second straight, with Mitchell Trubisky struggling after missing a game because of a shoulder injury.

Indy (4-2) has won three straight in the series and took over the early season lead in the AFC South.

Brissett was masterful most of the game. He was 26 of 39 with 326 yards, and in a game the Colts only produced 62 yards rushing, they needed Brissett to be at his best -- and he was.

Brissett opened the scoring with an 11-yard TD pass to Zach Pascal on Indy's first series.

The Texans (4-3) answered with two field goals, the second coming after Deshaun Watson appeared to find DeAndre Hopkins for a touchdown pass with Justin Houston draped around Watson's legs. But the officials ruled Watson was in the grasp, nullifying the subsequent throw.

Brissett, who set up the Texans' second score with a fumble deep in Colts territory, then threw a nifty 2-yard TD pass to T.Y. Hilton with 1:49 left in the half.

GREEN BAY, Wis. -- Aaron Rodgers had his best game by far under new coach Matt LaFleur, throwing for 429 yards and five touchdowns and running for another as Green Bay beat Oakland.

Rodgers completed 25 of 31 passes to eight different targets and finished with the first perfect passer rating of his career, leading LaFleur's offense to a season high in points.

Even with top target Davante Adams sidelined for the third straight game with turf toe, Rodgers threw for his most touchdowns in a game since Sept. 28, 2015, against the Chiefs.

Derek Carr finished 22 for 28 for 293 yards, two touchdowns and two costly turnovers for the Raiders (3-3), who lost their eighth straight against Green Bay, going back to 1990. The Packers (6-1) have scored 30-plus points in each of their last five games against the Raiders.

SEATTLE -- Baltimore quarterback Lamar Jackson ran for 116 yards and a touchdown, made key throws when necessary and led the Ravens to an impressive win over Seattle.

Jackson was the best player on the field, outshining Seattle QB Russell Wilson on a day the Seahawks star finally made his first critical mistake of the season. Jackson was especially good in the second half, when he led Baltimore on a pair of crucial scoring drives.

Earl Thomas made his return to Seattle after nine seasons of playing for the Seahawks, but aside from some occasional barking at the sideline of his former team and running off the field twirling Wilson's jersey over his head after the victory, the former All-Pro safety ceded the spotlight to Jackson.

The second-year quarterback ran for an 8-yard touchdown late in the third quarter on fourth-and-2 to give the Ravens (5-2) the lead. On their next possession and backed up deep in their own end, Jackson made a series of highlight plays to drive Baltimore into scoring position for Justin Tucker's fourth field goal and a 10-point lead with 3:47 left.

Wilson was nearly flawless for the first six games but struggled to find open receivers against Baltimore's physical secondary. Seattle (5-2) was leading 10-6 and driving when Wilson made the mistake of double-clutching and trying to throw late into the flat. Marcus Peters, traded to Baltimore less than a week ago, made a quick break on the throw, stepped in front of Jaron Brown and outraced Wilson for his fifth career interception return touchdown, the most of any player since Peters entered the league in 2015.

NASHVILLE, Tenn. -- Jurrell Casey recovered a fumble by Melvin Gordon at the goal line with 15 seconds left, and Tennessee pulled out a victory over Los Angeles after a frantic finish.

Gordon initially was ruled down shy of the goal line at the 1. Casey came out of the pile with the ball, and the Titans started celebrating. The play was reviewed and overturned the on-field ruling that Gordon was short of the goal line.

The call was a fumble forced by Titans linebacker Wesley Woodyard that was recovered by Casey for a touchback. Ryan Tannehill knelt down to run out the clock as the Titans (3-4) snapped a two-game skid.

The Chargers thought they had scored the go-ahead touchdown not once but twice in the final 44 seconds only to lose both on review by the replay official. That official also overturned Gordon being stopped on the Chargers' final play.

First, Philip Rivers' pass that Austin Ekeler took 16 yards was ruled a touchdown only to be reversed by the replay official for not breaking the plane as he was tackled by Kenny Vaccaro and Logan Ryan. After a false start, Malcolm Butler then was flagged for defensive pass interference on Mike Williams in the end zone.

Then Gordon went over right tackle with 34 seconds left for what officials ruled a 1-yard TD, and the replay official then reversed the call for the second time. Gordon ran again stopped by Jeffery Simmons and Rashaan Evans for no gain. That set up Gordon's final run with 19 seconds left.

The Chargers (2-5) have lost three straight and five of their past six.

The Vikings (5-2) have won three consecutive games in part because their quarterback is making plays to complement one of the NFL's top defenses.

Matthew Stafford also threw four touchdown passes, all to Marvin Jones, and became the fastest to reach 40,000 yards passing in NFL history. And Jones became the first Lions player in the Super Bowl era with four receiving TDs in a game.

The Lions (2-3-1) dropped their third straight game after a 2-0-1 start and they probably can't complain too much about officiating in their latest setback.

ATLANTA -- Jared Goff threw for two touchdowns and ran for another, and Los Angeles returned to the site of last season's Super Bowl loss to beat reeling Atlanta.

The Rams (4-3) snapped a three-game losing streak in the debut of cornerback Jalen Ramsey.

The Falcons (1-6) suffered their fifth straight loss and had quarterback Matt Ryan leave the game with an ankle injury. Ryan's right leg bent awkwardly as he was sacked by Aaron Donald and fumbled early in the fourth quarter.

Ryan limped off the field and was escorted to the medical tent on the sideline. He walked to the locker room, still favoring the ankle, with 7:36 remaining in the game.

Donald was credited with a sack, forced fumble and recovery on the play. It was the Rams' fifth sack of Ryan, matching the five sacks by Atlanta's defense this season -- none in the past four games.

The game was billed as a matchup of rookie quarterbacks Kyler Murray of the Cardinals (3-3-1) and Daniel Jones of the Giants (2-5), and both gave glimpses why they were the first and sixth overall choices in the draft, respectively.

But, Edmonds stole the show, scoring on runs of 20, 20 and 22 yards. The Cardinals defense also got four sacks and a forced fumble from Chandler Jones, Jordan Hicks had an interception and Patrick Peterson had a sack and forced fumble to seal the Cardinals' third straight win. It's the first time Arizona has won three consecutive games since 2015.

Murray finished 14 of 21 for 104 yards with no interceptions. Zane Gonzalez kicked field goals of 47 and 35 yards, the last coming after the forced fumble by Peterson, who was playing in his first game after a six-game suspension for using performance-enhancers.

The loss was the third straight for the Giants, who allowed Jones to be sacked a season-high eight times. Jones finished 22 of 35 for 223 yards, including a 28-yard touchdown pass to Rhett Ellison. Eli Penny scored on a punted punt.

The Bills, who began the day favored by 17 points, avoided what would have been a major upset against the patchwork Dolphins (0-6), who are in a major rebuilding mode.

Josh Allen led fourth-quarter touchdown drives following each of the Dolphins turnovers, and the Bills improved to 5-1 in matching their best start to a season in 11 years.

White's diving interception at the 2 of Ryan Fitzpatrick's pass on second-and-goal from the 12 led to Buffalo going ahead 17-14 on John Brown's 20-yard touchdown catch that capped a 12-play, 98-yard drive.

Two series later, White punched the ball out of the hands of rookie Preston Williams near the Miami 30, and the fumble was recovered by defensive end Jerry Hughes. Three plays later, Allen hit a wide-open Cole Beasley for a 3-yard touchdown.

CINCINNATI -- Gardner Minshew led a fourth-quarter touchdown drive that put Jacksonville ahead to stay, and Yannick Ngakoue returned an interception 23 yards to clinch a victory over winless Cincinnati.

The Jaguars (3-4) managed only field goals by still-perfect Josh Lambo until their rookie quarterback and their depleted defense made game-turning plays at the end.

The win capped a week in which the Jaguars traded disgruntled cornerback Jalen Ramsey to the Rams for three draft picks. Their defense picked off Andy Dalton three times in the fourth quarter to put it away.

The wait goes on for first-year Bengals coach Zac Taylor, whose team fell to 0-7 for the first time in 11 years.

Minshew was solid a week after his so-so performance in a 13-6 loss to the Saints. The rookie completed 15 of 32 for 255 yards, including a 2-yard touchdown pass to Keelan Cole for a 17-10 lead early in the fourth quarter. Minshew also scrambled for 48 yards.

The Bengals were booed repeatedly during another inept performance.

LANDOVER, Md. -- Robbie Gould made field goals from 28, 22 and 29 yards to provide the only points in an ugly win by San Francisco over Washington in steady rain and driving wind to remain undefeated.

Coach Kyle Shanahan's bunch didn't look like an unbeaten powerhouse in horrific conditions that made life difficult on quarterback Jimmy Garoppolo and the entire offense. Garoppolo bounced back from a dreadful first half to finish 12 of 21 for 151 yards passing.

San Francisco's defense continued its dominant run after holding the Los Angeles Rams to seven points last week and the Cleveland Browns to three before that. It's the Niners' first shutout since Week 1 of the 2016 season.

The weather seemed a perfect fit for interim Redskins coach Bill Callahan's run-first, run-second and run-third mentality. Washington (1-6) started the game with 10 rushing plays and Adrian Peterson ran for 81 yards on 20 carries, but they were shut out for the first time this season.