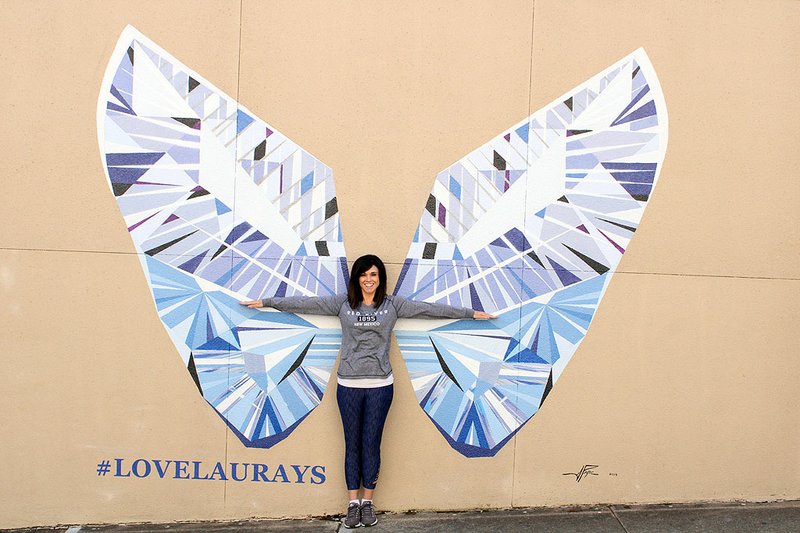 Daresa Rhine, while visiting Hot Springs from Texas, recently stood in front of the new angel wing mural on the side of Lauray's The Diamond Center. - Photo by Tanner Newton of The Sentinel-Record

Lauray's the Diamond Center has joined downtown Hot Springs' growing mural trend by adding a pair of diamond-like angel wings to the side of its iconic building as a "thank you" to the community.

Toddy Pitard, owner and master bench jeweler at Lauray's, said the idea for the wings mural was pitched by Jackie Brooks of Bottom Line Marketing. Brooks, who lives in Denver, was in Hot Springs last month to help film a television commercial for the store.

Brooks said the idea came to her around 7 a.m. on the Sunday they were filming. "Downtown was really slow, (and we were) waiting to shoot outdoor shots," Brooks said. While waiting, Brooks noticed the wall on the side of the building was blank and that "all the other downtown murals are popping up."

Pitard said Brooks looked at him and asked: "Why don't you have angel wings?" Pitard had never heard of wing murals. He said that all of his staff looked at him like he was crazy for not knowing what Brooks was talking about.

The wing mural craze started in 2012 when Colette Miller painted one in Los Angeles. The concept is that people stand in front of the mural in various poses so that it appears they have sprouted wings. Pitard said he read that Miller's reason for painting angel wings was "to remind humanity that we are the angels of this earth." The message was one Pitard said he agreed with. "I'm like, 'This is great,'" Pitard said.

Given the go-ahead by Pitard, Brooks contacted local artist John Payne, whose work can be found at Whittington Art Gallery. Payne said he had been looking for an opportunity to paint a mural downtown and this one "fell in my lap."

When Brooks showed Payne other examples of angel wing murals, Payne said he was immediately interested in doing one. "The concept was brilliant," he said.

The mural design was then shown to various committees that have to approve downtown murals, and with some tweaks, got the go-ahead.

As Lauray's sells diamond jewelry, the wings on the side of the building have a multifaceted appearance. Payne told Pitard the mural would take him three days to create, but he found he enjoyed making the mural so much he ended up spending around seven days on the project as the mural evolved and changed over time.

"Honestly I could have spent seven more days on it," he said.

As he started taking his time on the piece, Payne said he invited two of his friends to help paint the wings, Janelle Roberts and Alex Ditto. Before the three had finished the wings, Payne said people were already posing for photos in front of them.

Seeing the public react positively to the mural before it was finished, Payne said, was a fun experience. "I was elated," he said. Many pictures taken with the wings will end up on social media sites, and Payne said being able to find photos of people posing with the unfinished version is neat because subtle differences in the mural make those first photos unique.

Pitard said he likes the finished product, which has been popular with the public. He said seven out of 10 times that he walks outside of the building, there is someone posing for a photo with it. Pitard said he expects there to be lines for the mural during summertime.

Pitard also said that while the store is using the mural in some of its marketing, he considers it a way for the store to give back to the community. He said the building has been a jewelry store since 1886 and has been Lauray's since 1924. Pitard bought the business last November.

The mural, he said, is a way to say "thank you" to Hot Springs for supporting the store for 95 years, and for welcoming him to the city over the last year.

The mural is "not for Lauray's ... it's for everyone," Pitard said, noting he is considering expanding the mural by possibly adding a second set of wings closer to the ground for pets to use.