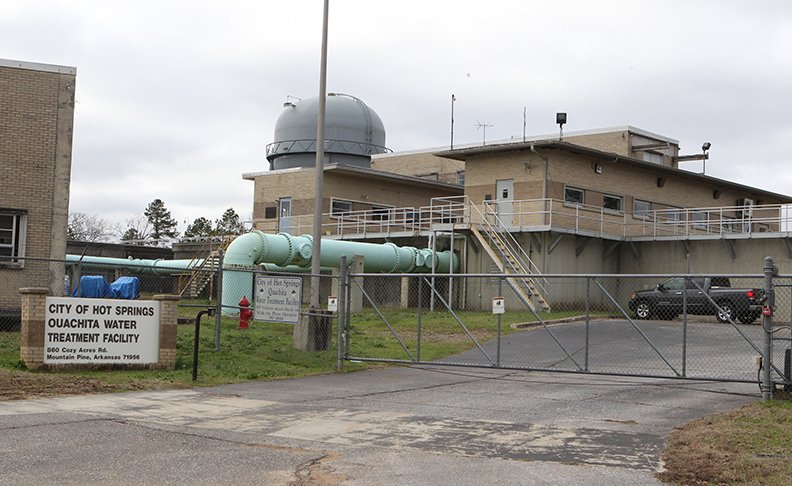 The Ouachita Water Treatment Plant. - File photo from December 2015 by Richard Rasmussen of The Sentinel-Record.

The city is preparing to increase the Ouachita Water Treatment Plant's capacity for holding water that's been used to clean the plant's nine filters, awarding an engineering contract earlier this month to enlarge backwash ponds that empty into Glazypeau Creek.

The $202,000 contract the Hot Springs Board of Directors granted Crist Engineers Inc. of Little Rock will pay for design and construction observation for one of the final improvements the city began making several years ago at the 50-year-old plant that treats water from upper Lake Hamilton. The city said the construction phase will cost close to $1.5 million.

Treated water that cleans the filters flows into the ponds. Hot Springs Utilities Director Monty Ledbetter said about 65,000 to 75,000 gallons a day are backwashed through each filter, part of the 15 million gallons the city's two plants produce to meet demand on an average day of consumption by the water system's more than 35,000 meters.

Upgraded filters and sedimentation basins can treat up to 21 million gallons a day, according to the plant's state Department of Health rating. The city allocated $2.29 million from ratepayer-secured 2014 and 2015 debt issues for the filter upgrades.

The city's 2005 withdrawal agreement with Arkansas Entergy Inc. allows it to pull up to 30 million gallons a day from the lake, but usage cannot exceed a 20 million-gallon-a-day average calculated over a rolling three-month period. The city board adopted a resolution last month that exercised the option to renew the agreement for a five-year term.

The renewal included a change in the formula used to calculate the city's cost to Entergy, which is compensated for water the city uses that would otherwise generate electricity at Carpenter Dam. Part of the cost is offset by effluent the city discharges from the wastewater treatment plant on Davidson Drive into Lake Catherine, as the effluent increases lake volume available for electrical generation at Remmel Dam.

The renewal raises Entergy's administrative fee from 3% to 5%.

Bonds the city issued in 2018 will pay for improvements to the backwash ponds and the $3.5 million project replacing switchgear that controls four high-service pumps pressurizing large diameter mains that feed the distribution system. The debt also paid for the 4.5 acres the city acquired adjacent to the Ouachita Plant's Cozy Acres Road location. The city plans to locate the new switchgear on the $113,000 acquisition.

A report provided by the city showed it has committed $14 million to water system improvements from a $20 million 2018 bond issue, including Crist's more than $5 million contract to design and oversee construction of the Lake Ouachita Water Supply Project. The city has said the $100 million endeavor will bring its 23.5 million-gallon average day allocation from the lake online by 2022.

A new rate structure being implemented over four years will secure $90 million in debt the city plans to issue over the next three years to finance the project. Higher rates, which took effect last year, are also paying down the $20 million debt issue floated last year to finance improvements to the Ouachita Plant, dams impounding three small lakes in the city's Northwoods Urban Forest Park and design and engineering for the supply project.

The report showed the city has paid $4.4 million of the $14 million committed from last year's bond issue.