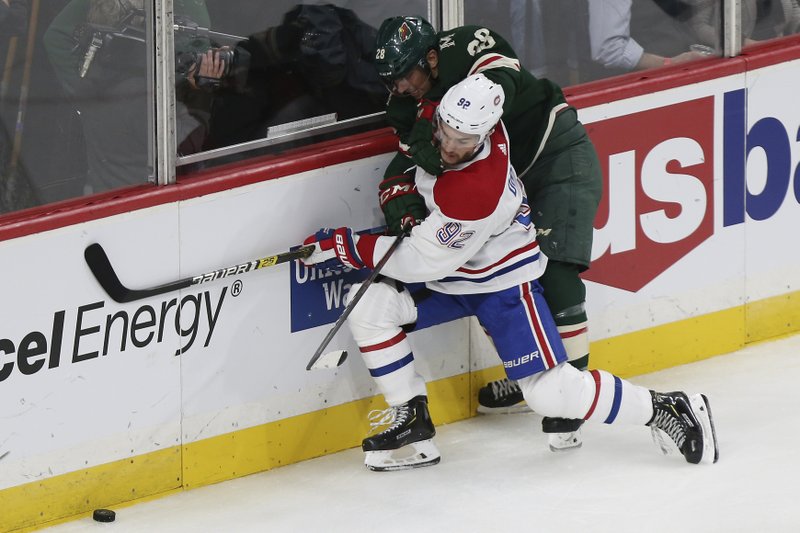 Montreal Canadiens' Jonathan Drouin (92) and Minnesota Wild's Gabriel Dumont (28) fight for possession of the puck in the third period of Sunday's game in St. Paul, Minn. Photo by Stacy Bengs of The Associated Press

ST. PAUL, Minn. -- Zach Parise scored the go-ahead goal midway through the third period and the Minnesota Wild won their second game of the season, beating the Montreal Canadiens 4-3 on Sunday.

Devan Dubnyk made 29 saves and earned his first win of the season.

Phillip Danault scored twice and Tomas Tatar added a goal for the Canadiens. Keith Kinkaid stopped 29 shots in his second game of the season.

Parise took a perfect pass from Zucker through traffic and sent a shot that beat Kinkaid and gave the Wild a 4-3 lead. The score came just over four minutes after Hunt tied the game on the power play.

The teams squared off for the second time in a four-day span. The host Canadiens won the previous meeting 4-0.

Bo Horvat also scored and Elias Pettersson had two assists for Vancouver, which bounced back from a 1-0 loss at New Jersey on Saturday to win for the fifth time in six games. Jacob Markstrom stopped 38 shots to win his third straight start after losing his first two.

Jesper Fast had a goal and an assist, and Artemi Panarin also scored for New York, which has lost four straight. Henrik Lundqvist finished with 40 saves.

CHICAGO -- Tom Wilson broke a tie with 8:13 left and Washington rebounded after blowing a two-goal lead to beat Chicago for its third straight win.

Wilson beat Corey Crawford from the right edge of the crease with his third goal after he was left open and took a cross-ice pass from Carl Hagelin to put Washington ahead 4-3. Lars Eller added an empty-netter from his own zone with 49.3 seconds remaining.

T.J. Oshie, Nic Dowd and Alex Ovechkin also scored for the Capitals, who got 41 saves from Braden Holtby. Hagelin had two assists.

Drake Caggiula, Dominik Kubalik and Patrick Kane scored for the Blackhawks, who rallied to tie it at 3 midway through the third. Alexander Nylander had two assists and Corey Crawford blocked 25 shots as Chicago's two-game winning streak ended.

Connor Hellebuyck made 28 saves and recorded his first shutout of the season.

Ryan Nugent-Hopkins and Connor McDavid were stopped in the shootout. Mike Smith made 23 saves for the Oilers, who had their two-game winning streak snapped.

Backlund got a pass from Matthew Tkachuk on a 2-on-1 rush after a neutral zone turnover and beat goaltender John Gibson with a snap shot from the right faceoff circle. It was his second goal in two games.

Jakob Silfverberg scored for Anaheim, which lost for the first time in five home games. Gibson made 27 saves.