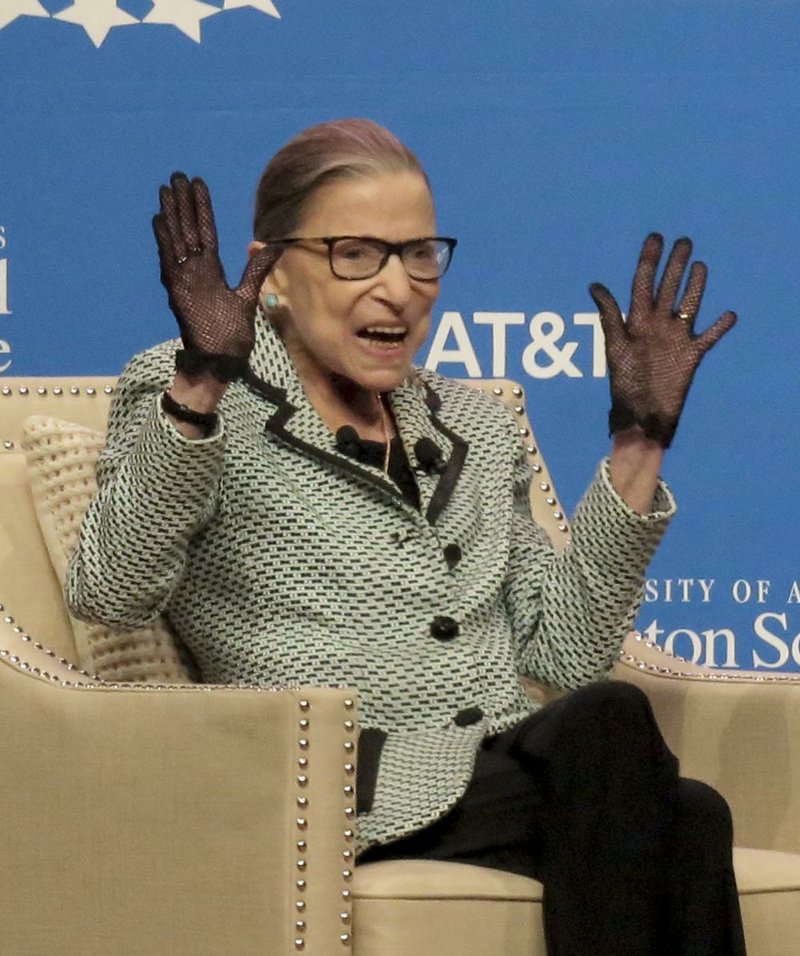 NORTH LITTLE ROCK -- Former President Bill Clinton, back in his home state Tuesday to introduce the U.S. Supreme Court justice he nominated in 1993 to a capacity crowd at Verizon Arena in North Little Rock, said that during his first conversation with Ruth Bader Ginsburg, "I just knew she was the right person for the court."

He recalled that Ginsburg, then a judge on the U.S. Court of Appeals for the District of Columbia, "was rigorous but warm-hearted" and espoused "an achievable judicial philosophy."

He said he soon realized that "she was somebody I really liked" and that she could be a Supreme Court justice with "heart, spirit, talent, discipline, knowledge, common sense, wisdom" and "an ability to build common ground in a world becoming increasingly polarized."

It's a decision he said he has never regretted.

"In the last 26 years, she has far exceeded even my expectations," he said. But, he added as a smile crawled across his face and he shook his head as if in disbelief, "One thing I did not see coming was her ascendancy to pop-culture icon."

Minutes earlier, boisterous attendees demonstrated that point, chanting in unison, "RBG! RBG!" as the initials flashed in white against the blue background of huge screens to open the Kumpuris Distinguished Lecture before the series' largest crowd ever.

The screens then switched to a video of Ginsburg taking the oath of office on Aug. 10, 1993, as Clinton stood by, eliciting a roar of applause that nearly drowned out the video's words.

The longtime acquaintances then took their places in comfortable tan chairs, half-facing each other while Totenberg posed questions in a conversational format and afforded Ginsburg an opportunity to talk about her life before becoming a Supreme Court justice, before becoming an appellate judge and even before enrolling at Harvard Law School, where she was one of just nine women in a 500-person class.

Ginsburg entertained the audience with tales of being the second woman appointed to the nation's highest court after Sandra Day O'Connor had been the lone woman on the court for 12 years.

"There was a lot of attention paid to us in how we interacted," she said, recalling a headline once noting that she had interrupted O'Connor, and O'Connor later waving it off, noting that the men on the court interrupt each other all the time and no one notices.

She recalled that once, at a reception for the two justices, the National Association of Women Judges even gave O'Connor a T-shirt saying, "I'm Sandra, not Ruth," and gave Ginsburg a shirt saying, "I'm Ruth, not Sandra."

"That doesn't happen anymore, now that we are three," she said, drawing applause with her reference to Justices Sonia Sotomayor and Elena Kagan.

"It was a lonely position," she said.

But, reflecting a theme that she had dealt with for much of her life, she said that in her earlier days as the sole woman on the court, "more than once" at conference "I would make a comment. No reaction. Then one of my male colleagues would say basically the same thing and people would react: That's a good idea; let's discuss it."

"It's a habit ... you don't expect very much from a woman, so you kind of tune out when she speaks, but you listen when a male speaks. Now I can tell you that that experience, which I had as a member of the law faculty, as a member of the court of appeals, now that I have two sisters-in-law, it doesn't happen."

Ginsburg also addressed her health, assuring the audience that despite finishing radiation treatment on Aug. 23 for a tumor on her pancreas, "I had promised the Clinton library that I would be here, and I just was not going to. ..." She was interrupted by applause, and she told Totenberg, "I'm pleased to say that I am feeling very good tonight."

Ginsburg also discussed her friendship with the late Antonin Scalia, despite them being on opposite ends of the political spectrum, saying he was an "iconic conservative" and she "an iconic feminist."