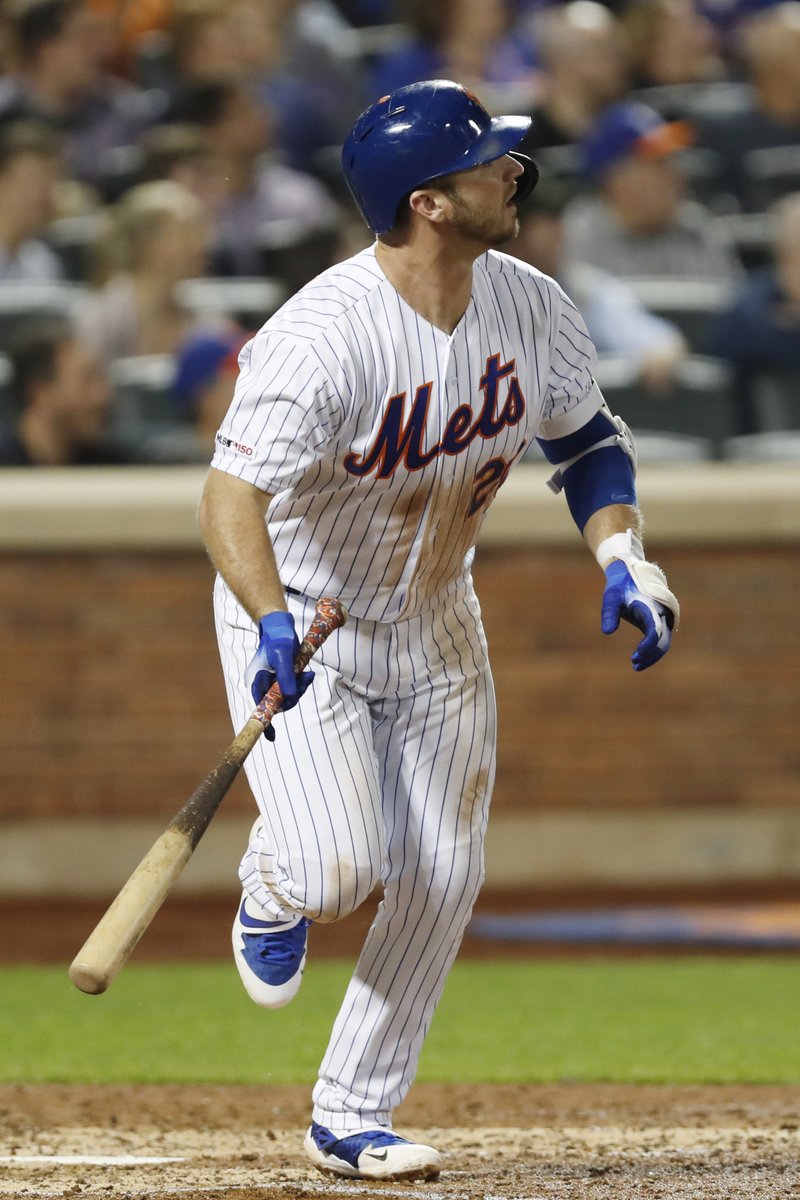 NEW YORK -- Pete Alonso hit two home runs to take the major league lead, Jacob deGrom struck out 11 and the New York Mets beat the Arizona Diamondbacks 3-1 Monday night in the opener of a crucial four-game series for both teams.

The Diamondbacks slipped to 2 1/2 games behind the Cubs for the second NL wild-card spot and the Mets trail by four.

Alonso hit a solo drive in the first inning, then connected for his 47th home run in the fifth. He moved two ahead Mike Trout for most in the majors and closed within five of Aaron Judge's rookie record set two years ago.

DeGrom (9-8) allowed one run and three hits in seven innings. He gave up a home run to former teammate Wilmer Flores in the fifth.

Seth Lugo pitched two innings for his fifth save.

After a 21-1 win over Seattle on Sunday, the Astros set a franchise record for runs scored in consecutive games with 36.

Houston hit six of its seven homers in the first two innings for an 11-0 lead. The seven shots matched a franchise record for homers in a game set Sept. 9, 2000, against the Chicago Cubs. Alex Bregman, Jose Altuve and Michael Brantley also homered.

The Astros extended their lead over Oakland to 10 1/2 games in the AL West.

Greinke (15-5) retired 11 of the first 12 batters he faced. He allowed just two hits and didn't walk a batter.

Houston's offensive exploits spoiled Mike Fiers' try at a piece of A's history. The right-hander had won 12 straight decisions and was bidding to match Hall of Famer Catfish Hunter's run in 1973 for the best since the club moved to the Bay Area.

Atlanta increased its lead over Washington to 9 1/2 games and reduced its magic number to 10 with 17 games remaining. The Phillies fell three games behind the Cubs for the second wild-card spot in the NL.

Foltynewicz (6-5) retired the first 13 batters before Corey Dickerson went deep in the fifth. He gave up three hits, one run and struck out seven. The right-hander won his fifth straight decision.

Cesar Hernandez hit a solo homer off Josh Tomlin in the ninth to cap the scoring.

SAN DIEGO -- Touted prospect Nico Hoerner had three hits and four RBIs in his big league debut and made some nice plays at shortstop as Chicago beat San Diego and snapped a three-game losing streak.

The 22-year-old Hoerner, the Cubs' first-round draft pick out of Stanford in 2018, was promoted from Double-A Tennessee earlier in the day because All-Star shortstop Javier Báez and Addison Russell are sidelined by injuries.

Nicholas Castellanos hit a two-run homer and Kyle Schwarber had a solo shot to back Kyle Hendricks, who pitched 5 2/3 strong innings.

Hendricks (10-9) allowed two runs, one earned, on seven hits while striking out five and walking one.

The defending World Series champion Red Sox are still in playoff contention, but barely. They began the day eight games out of the second AL wild-card spot.

James Paxton (13-6) won his eighth straight start, allowing four hits in 6 2/3 innings. He struck out seven and walked three in setting a career best in victories as the Yankees increased their lead to nine games over second-place Tampa Bay.

Austin Romine and Gio Urshela each hit solo homers for the Yankees, who took the final three of a four-game series. New York increased its club record to 270 homers, a night after setting the mark.

Eduardo Rodríguez (17-6) gave up one run in six innings, striking out nine with five hits and a walk while throwing a season-high 117 pitches.