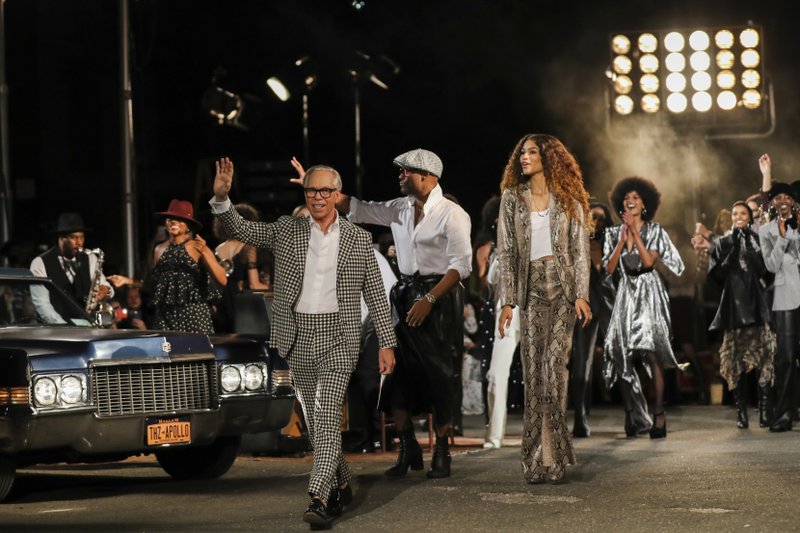 NEW YORK -- Tommy Hilfiger never shies away from spectacle when it comes to his runway shows, and his return to New York Fashion Week after several years was no exception.

For his latest collaboration with actress and singer Zendaya, Hilfiger brought the fashion world uptown to the Apollo Theater in Harlem -- actually, to a street just outside the famed theater, where the designer set up a stage filled with musicians and dancers to celebrate Harlem-inspired fashions of the late '70s and early '80s.

The show began with a sole musician on trumpet, then moved on to an addictive soundtrack of funk music and classics like Aretha Franklin's "Respect" and James Brown's "Get Up Offa That Thing."

The clothes were more luxurious than Hilfiger's typical sporty style, with lots of leathers and velvets and faux fur. In a backstage interview, he said he chose Zendaya as a collaborator for what he sees as her intrinsic sense of style.

"I just thought If I could get a little eyedropper of that sense of style brought into my company, we'd be cool," said Hilfiger, who previously partnered with supermodel Gigi Hadid on collections. "And she gave me more than an eyedropper, she turned on the faucet."

Zendaya said she and her design team were given a lot of leeway.

"He just let me do whatever I wanted to, which was great," she said of Hilfiger. "He told me I could be as creative as I wanted."

Hilfiger said the collaboration brought his company a new dimension.

"This is a reinvention for us, because it took us to another area of fashion that we've never been into," the designer said.

The huge cast of models was a diverse crowd, in terms of size, background, gender and age. Among them: supermodel Winnie Harlow, a pregnant Ashley Graham, and veteran Alek Wek, who beamed as a fan in the audience rose to his feet to bow down in tribute.

Many of them pranced joyously to the soundtrack, played by musicians who were set up inside classic American convertibles of the period. The musicians were from Vy Higginsen's Harlem-based performance training center, the show notes said, called the Mama Foundation for the Arts.

Garments from the show were immediately available for purchase in this "See Now, Buy Now" collection, which marked the globe-trotting Hilfiger's first New York Fashion Week show in three years.