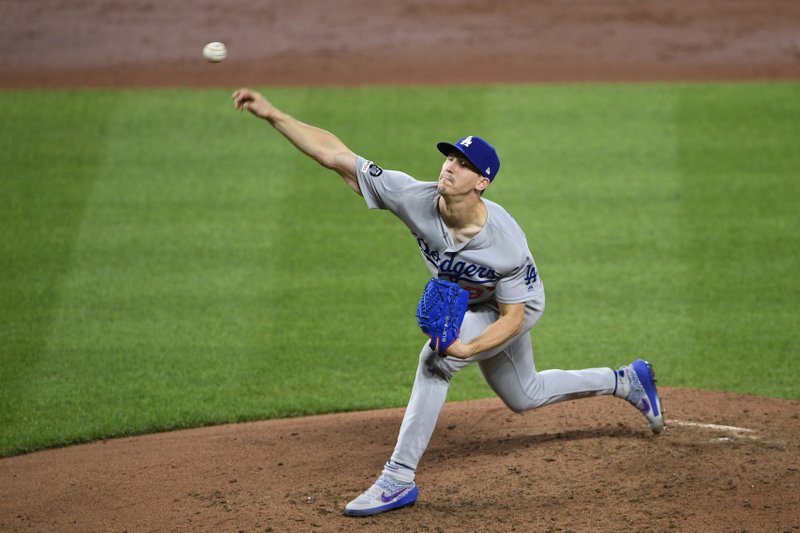 After the final out, the first team to clinch a playoff spot this season gathered at the mound for a subdued celebration that included a wardrobe change for a pending champagne celebration in the clubhouse.

Los Angeles, coming off consecutive World Series losses to Houston and Boston and seeking its first title since 1988, will likely begin the postseason at Dodger Stadium on Oct. 3 against the NL wild-card team.

Though an Arizona loss to the New York Mets would have clinched it for the Dodgers, Los Angeles emphatically took care of business on its own. Seager homered with two on to cap a four-run first inning against Ty Blach (1-3) and added a two-run drive in the third for a 6-0 lead.

Gavin Lux hit his first career homer in the fifth to increase the Dodgers' NL record for long balls in a season to 258.

Philadelphia closed within two games of the Chicago Cubs for the NL's second wild card.

J.T. Realmuto, Bryce Harper and Dickerson all homered in the first inning, Scott Kingery hit an inside-the-park homer and Dickerson tacked an insurance run with a solo shot late to help the Phillies win for the third time in four games.

Blake Parker (3-2) pitched two scoreless innings of the relief for the win. Hector Neris worked a scoreless ninth for his 25th save.

HOUSTON -- Matt Olson and Sean Murphy each homered twice, and Oakland tagged Wade Miley for seven runs in the first inning and scored a season-high 21 runs in a rout of Houston.

After being blanked in a lopsided loss on Monday, Oakland recovered to win its seventh of nine and remained ahead of Cleveland for the second AL wild-card spot.

The Astros were coming off a 21-1 win over Seattle on Sunday and a 15-0 thrashing of Oakland on Monday in which they hit seven homers. It was the first time the Athletics had been shut out since May 9.

But on Tuesday, the A's had a season-best 25 hits and built a 7-0 lead in the first inning without an extra-base knock. They still ended up tying a season high with six homers after not hitting any in their previous two games.

Houston's Wade Miley (13-5) allowed seven hits and seven earned runs in a third of an inning.

St. Louis, which had won 23 of 30 coming in, maintained a four-game lead in the NL Central over the second-place Chicago Cubs.

González (1-6) allowed one run and four hits in six innings. Jairo Díaz got six outs and finished a six-hitter for second save.

Michael Wacha (6-7) allowed five hits in four innings and is winless in seven starts and two relief appearances since July 19.

ARLINGTON, Texas -- Austin Meadows tied the game with a two-run homer in the eighth, and Tampa Bay scored twice in the 11th after two Texas errors on the same play, stretching its winning streak to six games.

Tampa Bay had two on with two outs in the 11th against Emmanuel Clase (2-3) when the rookie reliever bobbled a slow roller by Kean Wong and had his desperate throw bounce away from the first baseman. Second baseman Rougned Odor picked it up and made a high errant throw into left field with a runner diving back into second base, and Nate Lowe scored the tiebreaking run from third. Guillermo Heredia followed with an RBI single.

Emilo Pagan (4-2) struck out two in a perfect 10th before Peter Fairbanks worked the 11th for his first career save.

SAN DIEGO -- Manuel Margot drew a four-pitch, bases-loaded walk with one out in the 10th inning and San Diego overcame an impressive power display by Kris Bryant and Jason Heyward to beat Chicago.

The Cubs' lead for the second NL wild-card spot was cut to one game over Milwaukee and two over Philadelphia.

Bryant hit a pair of two-run home runs and Heyward also homered twice and drove in three runs for the Cubs.

Steve Cishek (3-6) walked Margot to bring in Luis Urias with the winning run.

MIAMI --Christian Yelich broke his right kneecap on a foul ball and will miss the rest of the regular season, an injury that overshadowed Milwaukee's win over Miami.

The Brewers didn't say whether the reigning NL MVP might be able to return for the playoffs that begin Oct. 1 if they make it that far. Yelich will return to Milwaukee on Wednesday for further evaluation.

Milwaukee, which won its fifth in a row, closed within one game of the Chicago Cubs for the second NL wild-card spot.

Yelich fouled a ball off his leg in the first inning. He was down on the ground for several minutes before limping off the field.

Pinch-hitter Tyler Austin lifted a tiebreaking sacrifice fly in the ninth inning. Yasmani Grandal led off with a single against Adam Conley (2-9), Grisham doubled and Austin put the Brewers ahead.

Junior Guerra (9-5) got the win. Drew Pomeranz pitched a scoreless ninth for his first save.

Starlin Castro homered for Miami. Hernan Perez hit his 19th of the season for Miami.

New York has taken the first two games in the key four-game set between NL playoff contenders and closed within three games of the Chicago Cubs for the second NL wild card. Arizona, which had won 11 of 12 before the consecutive losses, remained 2½ games behind the Cubs.

Todd Frazier drove a pair of run-scoring doubles for the Mets, who began the day four games behind the Cubs.

Eduardo Escobar homered off reliever Brad Brach and drove in two for Arizona. He has 112 RBIs.

DETROIT -- Jordy Mercer capped a comeback from a six-run deficit with a game-ending single off Chance Adams in the ninth inning, and Detroit overcame six home runs by New York.

Brett Gardner and Didi Gregorius each homered twice, and Gleyber Torres and Edwin Encarnación also went deep for the Yankees, whose 276 homers tied Minnesota for the major league lead.

New York led 6-0 in the second inning. But the Tigers tied the score with six runs in the third, aided by an error by Torres at second base.

Grayson Greiner doubled with one out in the ninth off Chance Adams (1-1) and Mercer's single to the gap in right-center scored pinch-runner Willi Castro. Tigers closer Jiménez (3-8) pitched a perfect ninth.

Mookie Betts homered for the Red Sox, who have lost four straight.

Justin Shafer (2-1) pitched 1 1/3 innings as Toronto won for the first time since Aug. 31. Ken Giles finished in the ninth for his 19th save in 20 opportunities.

Berriós (12-8) struck out four and walked one. Aníbal Sánchez (8-8) was almost as sharp for the Nationals, finishing with four hits and one walk allowed, along with five strikeouts.

The American League Central-leading Twins took a five-game lead on Cleveland into the night. The Indians, who have six more losses than the Twins, played at the Los Angeles Angels.

The Nationals entered 9½ games behind the Atlanta Braves in the National League East, but they were in the first wild card spot, 3½ games above the cut, ahead of Milwaukee. The Chicago Cubs have the second spot.

Adam Engel added a solo shot for as the White Sox won their second straight, but just their fourth in 14 games.

Ivan Nova (10-12) allowed three runs in 5 2/3 innings to snap his three-game losing streak. The right-hander yielded six hits, while walking none and striking out five.

Stephen Vogt hit a two-run homer and drove in four runs. His two-run single in the first off rookie Mitch Keller (1-4) staked Cueto to a quick lead and Brandon Crawford added an RBI single as four of the first five batters got hits.

Shaun Anderson earned his first save as the Giants won at home for the sixth time in 18 games.

Dan Altavilla (1-0) pitched around a leadoff walk in the eighth for his first big league win since May 18 last year against Detroit. Anthony Bass tossed a perfect ninth for his third save.

ANAHEIM, Calif. -- Rookie Zach Plesac pitched a four-hitter for his first complete game in the majors and Cleveland kept pace in the playoff race.

The Indians have won four of five. The Angels, again playing without star Mike Trout, have dropped three in a row -- the loss ensured the Angels will miss the postseason for the fifth straight year.

Plesac (8-6) struck out five and walked two while throwing 114 pitches.